For their post-Thanksgiving offering, the members of La Follia made a feast of leftovers.

Flutist Marcus McGuff grafted movements by W.F. Bach, Frederick the Great, and Johann Ludwig Hasse into one chimerical sonata, which worked in no small part because of McGuff's beautiful sound and sense of dialogue between the throaty low and sweet high registers of his flute. He dazzled as he shuttled and flourished between the two, although at times his poorly scheduled breathing left seams in an otherwise flawless fabric.

Tobias Hume's 1605 Captaine Hume's Pavane for solo viola da gamba has a much looser weave, and gambist James A. Brown gave an impressionistic feel to this remarkable work made before the baroque molds were formed.

Harpsichordist Keith Womer showed us his brilliant virtuosity as a soloist, revealing his mastery of voicing through the use of ornament and hesitation, all without losing the musical pulse. He is a treasure for La Follia and for Austin. Next time he plays a solo recital, be there. One of the highlights was his sensitive partnering with violinist Laurie Stevens in Bach's Cantabile in G, a leftover jewel from his Violin and Harpsichord Sonata, BWV 1019, for which the duo made a compelling case.

The instrumentalists banded together for a hearty reading of Handel's Sonata in E Minor -- really more a suite of tantalizingly brief scraps from larger works -- and here you could hear the collegial interplay among the musicians. Throughout the concert, Brown, Womer, and lutenist Scott Horton showed the limber yet sure-footed responsiveness of a jazz rhythm section.

La Follia is fortunate that two of Austin's best singers are also early music experts. Tenor Chris LeCluyse scored with lively performances of two arias by Giovanni Pergolesi, to which the ensemble was not shy about dancing. Mezzo-soprano Stephanie Prewitt brought her reliably uncluttered, direct approach to two Vivaldi cantata arias. Their singing is no more beautiful when they join voices, as in the "Grande Chaconne," a medley of music based on repetitive bass patterns or grounds.

Trying to bring together music based on two different grounds undermined the structural integrity; momentum was lost going from the simpler four-note descending pattern into the eccentric dance pattern of Monteverdi's "Zefiro Torna." The texts went from the profane to the sacred as quickly as channel surfing: "Aux plaisirs, aux delices bergeres" advises shepherdesses to pleasure themselves before they get too old while Heinrich Schütz soberly urges the righteous to rejoice and be glad in God. This was an admirable attempt; not as successful as when, say, peanut butter met chocolate, but I hope they'll try again. 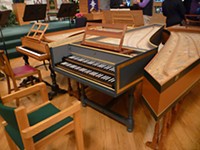