Lingering on the Beloved Characters of 'What Ever' 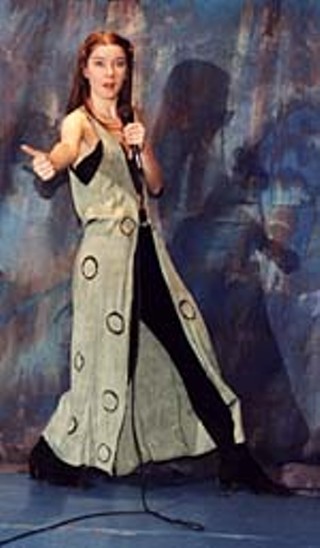 When I first saw Heather Woodbury's solo performance What Ever, I was mesmerized. I had never seen a female performer pull off so much dialogue, character, and story so effortlessly. Eight hours' worth of text and movement, with dozens of characters and Woodbury transitioning between them using simple props like a microphone or a chair or a light cue: The acts are a feat of actor athleticism.

What Ever's many hours are spread across four nights, two hours a night. Because of this serial component, the show becomes a habit, a really good one. I eagerly wanted to know what was going to happen to the hallucinating, poetic California teen, Clove. Would she get together with the cool, vivacious Skeeter, he who later journeys across coasts in search of his estranged father? What about Violet, the dear old woman with her poodle Balzac? She reminisces about John Coltrane and living in Paris with a now-deceased lover. Her stories feel as if you are sitting around the kitchen table with a suave grandparent, telling you all the secret tales your parents forbid you to hear. And Bushie, oh Bushie! The New York prostitute of the song to an urban tree, "Just a ho-ho-hoeing in the rain." Does she find peace from poverty and abuse? Then there are the minor characters, like the American Indians on a joyride through the reservation with Skeeter hitching in the back or Kurt Cobain's phantom or the migrant farm workers or the MTV-esque DJs keen on the rave scene.

It's been six years since Heather Woodbury last performed What Ever in Austin, and while I've seen the show twice, I crave it, to experience again the sympathy and laughter that prompted so pleasantly in me before. What Ever is not to be missed, but if you do, no worries: Woodbury has reformatted her script into a novel, which has just been published by Faber and Faber Inc. Reading that could be an entirely new interaction with her lively characters. We had a short phone conversation before her anticipated arrival.

Heather Woodbury: First of all, the reason for me revising What Ever is because now it is published as a novel.

Austin Chronicle: And what is it in the novel that we might see differently from the staged version?

HW: I think it's very different to read something than to watch it. And of course there are people who may not have ever seen it. They would read it and come to it with fresh ears, fresh perspective. I have had people who have just read it who have never seen me perform come up to me in bookstores. They have very similar reactions to people who have seen the show, which is that a lot of them are in love with one or two favorite characters depending on their regional origins. They tend to gravitate toward the characters with the regions they are actually from. They say, "At first I couldn't get into the characters who were from the West Coast," if it's somebody from the East Coast, "and eventually I got pulled into the whole thing." I have had that response in audiences, too. These characters are from extremely diverse, jarring backgrounds, and at first people resonate with one aspect and not the other, but they eventually get pulled into the whole diverse soup. One of the purposes of What Ever is to have this wider sense of community, a sort of metacommunity.

AC: I often feel like my personal attachment to the characters runs deep, especially in memory and recall. I am wondering if that's because their stories are familiar, and so they become almost like modern archetypes. There is a mythic quality to these characters.

HB: Well, that's interesting. When I create characters in my writer's sketchbook, I tend to start from an archetypal base. I think I start in two places, and they eventually come together. I start in a very anecdotal, aural level, where I overheard bits of people that I caught in the street or wherever I've been. Sometimes, it's just a face. Some scrap of real people that I have collected. But I also start from a very thematic and mythical base. And I do borrow liberally from everything from fairy tales to Greek myths and classic archetypal figures in literature. Like Mark Twain, or even Henry Fielding. Especially, I think, the character Skeeter is from the picaresque novels of the 18th century on through Huckleberry Finn, on to River Phoenix in My Own Private Idaho. Then of course a character like Violet is like a very classical, ancient, old crone.

AC: She seems eternal to me. 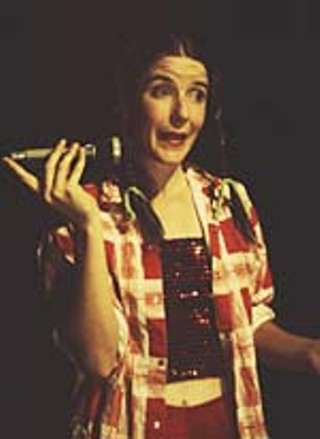 HW: I thought to take the archetype or stereotype and then subvert it. Violet is neither the terrifying hag of the classical variety, nor the cute little old lady with a poodle. She is somewhere in between, and maybe at moments she's both. Clove is not the suicidal teen. She is actually in search of ecstasy, and her excesses lead her to appear suicidal, but she is actually the opposite of suicidal. She is life seeking. Cobain is not a purely tragic figure. By making him a friendly ghost, I am not trying to mock the memory of a very talented and harmed individual. I am trying to explore the wounded king.

AC: On a more historical track, what has been going on since the last time you visited Austin around six years ago?

HW: Touring What Ever extensively, from Chicago to Austin, London, most recently Galway [Ireland] arts festival.

AC: How were you received there?

HW: I was received better than I had been received. But Austin audiences will want to know that I've said that they reminded me of an Austin audience. There literally was some strange similarity between the Irish audiences and Austin. Maybe it has to do with the roots of where a lot of people in Austin are derived. I don't know. But it was a combination of being very attentive and down-home in a way.

AC: What keeps you coming back?

HW: I'd say Austin is the whole package. I just really like it. Austin is a lively, unpretentious place. It's restorative to be around that kind of energy. I like Austin because it's a sexy place without being decadent. There's a healthy hedonism in Austin, unlike Northern California, where there's perhaps more derangement. There seems to be a Texas avant-garde. Not just Texas, but some other states which would completely take snobby people on the coasts by surprise. A lot people just don't know about it. They are really behind the times. They're like, "Texas! Blech!" I think it's because Texas has a sort of larger-than-life behavior. The weirdos in states like Texas are wonderfully big about their weirdness. They're still kind of folksy about it. There have been a few bands of touring people coming out of places like Texas who do big, spectacular, funny, silly, avant-garde things. I like that. They also have a sense of humor about themselves.

I also like the environment of Austin. The music, obviously, and Barton Springs take up about 50%. And hopefully the readership. I'd like people who have never seen the show to come to the bookstore and buy the book. It's a way for the whole story to live on without me having to be the one person to bring life to it. That's the satisfaction every artist wants, that the object will live on without them there to animate it.

But to answer your question, I traveled a lot. I got unhooked from being a New Yorker, and I ended up living here in Los Angeles. I've gotten about three-quarters of the way through a new performance novel which has to do with Los Angeles and Brooklyn. At one point, I edited What Ever so that it could be something that could be read, which is a pretty hard job. I had to calibrate all of the spellings of the accents. There are hundreds of different accents and vernaculars in What Ever. I wanted to make it readable, but I also wanted to retain the sense of what all these different people sound like. Every time a word was purposefully misspelled, I wrote it down and compared to every other time a word was purposefully misspelled and tried to figure out what was the best misspelling and where I should bring myself in and spell it in standard English. That took quite a while. I also added thumbnail sketches of characters' behaviors and the way they looked and the scenes they found themselves in in order to provide a modicum of what I provide onstage as an actor. And that was fun, too. There are liberties you can take in a novel that you can't provide onstage. It was fun to know what Skeeter was wearing when he met Clove.

AC: I can't wait to see the show. I have seen the show twice, the whole thing, twice. The characters are like ghost memories for me where they keep haunting me if the show is brought up. Just living my day, it doesn't come up, but sitting here talking about it, they become alive within me again.

HW: That's how I feel about some Dostoyevsky characters. I can't even remember what happened in the novel; all I remember is the feeling, a very strong feeling about the character. It will be really interesting to perform it for people who are so familiar with it. I've been doing it for a lot people who haven't seen it before, and that's different. We'll see. Now, it's like an old wine to me.