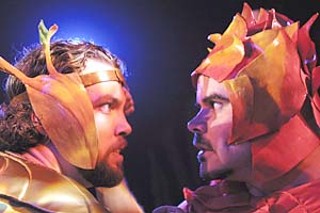 Winds of change blow mightily in Shakespeare's tragedies. Gusts of oratory describe the injustices and illegitimacy of the powers that be, then regimes are toppled by rebels and warriors who sweep away their rulers and followers like forces of nature.

Judging by the Coriolanus she has staged for Vortex Repertory Company, director Lorella Loftus is keen on this notion. The production is grounded in the elements and gathers force like a storm. On a stage dominated by great stone blocks -- designer Ann Marie Gordon's set suggests ancient monuments, with a massive sword's hilt rising from one -- the Romans and Volscians are locked in ferocious battle. Matthew Patterson appears as Roman general Caius Marcius Coriolanus in a tunic that suggests tongues of fire crossing his breast and a helmet that appears to encase his head in flames. Costumers Chad Salvata and Kari Perkins neatly symbolize the blazing temper of this warrior, and Patterson matches it with a seething anger that seems to burn away his patience for the politics and customs of his people. When he isn't matching swords with his mortal foe Aufidius -- Todd Porter, in a roaring, tigerish turn -- Coriolanus is getting an earful from his mother Volumnia or his cousin Menenius. Jennifer Underwood's imperious Volumnia -- a burning shadow in her black gown accented with scarlet triangles -- projects such arrogance that you believe Coriolanus suckled it from her breast. Betsy McCann's soothing Menenius, meanwhile, is sheathed in pastel blues and greens -- the water to her kinsman's fire. But she cannot keep Coriolanus from burning his bridges with the Roman people, who then banish him from the city. Patterson renders his character's spiteful decision to join forces with Aufidius and wage war on Rome with a powerful rancor, one that promises an explosively violent end for Rome or this Roman.

But this production that blows in like a lion ultimately goes out like a lamb. Somewhere in the second half, Loftus abandons vigorous blocking for long stretches in which there is little movement at all -- a choice that shows tremendous faith in her actors to sustain our attention with their delivery of language, to keep the play moving through its words, as it were. While Loftus' faith is not wholly misplaced, the scenes grow so static that the drama's momentum drains away just as it reaches the climax. And when Coriolanus heeds his mother's pleas to show Rome mercy, Patterson gives in so meekly that he comes off more a schoolboy than a general. The interpretation may have some validity, but Coriolanus' stature is so diminished by it here that his fate feels less tragic than foolish, and even his final, fatal battle with Aufidius isn't enough to restore it.

To be fair, the playwright makes it difficult for anyone staging Coriolanus. By making the play turn again and again on the title character's irritability, rashness, and mercurial nature, the Bard makes it nigh impossible for anyone to communicate the nobility the Roman is said to possess. Loftus and company make a noble effort, however, attacking Coriolanus with a fierceness of imagination and commitment that would do the Roman general proud.