Every year it seems that the St. Edward's University Theatre Department favors Austin with a full-blown production of an important and classic American play, and that's a very good thing. Giving older American plays the kind of productions they deserve is a difficult undertaking, for not only do such plays usually require realistic interior settings, which are expensive to produce and arduous to execute, but they also require actors with tremendous depth and range. There's a good reason why you don't often see productions of Death of a Salesman, which St. Ed's produced a couple of seasons ago: There aren't a lot of actors who can do justice to Willy Loman.

A Raisin in the Sun fits in perfectly with St. Ed's pattern. In addition to being a funny and moving treatment of the theme of family in American drama, Lorraine Hansberry's play about a black family deciding whether or not to move from their deteriorating Chicago tenement into a new home in a white neighborhood completely changed the lily-white face of 1950s Broadway theatre. Director Melba Martinez has her designers and actors support Hansberry's play in almost every conceivable way. Austin Jephson's wooden, earth-toned set, while occasionally defying logic, is barren and run-down but still upright and cared-for enough to reflect the closeness of the Younger family. Andrea Skola's period costumes look sharp, particularly on the men, with suspenders and Oxford shoes abounding. Director Martinez provides an entirely appropriate sound design, rich in jazz and swing music, that often underscores the action with selections that deepen the emotional impact of the story. However, the real treasures here are the actors, a tremendously talented group, including Kristen Bennett as progressive and precocious sister Benny and Gina Houston as long-suffering wife Ruth. One of the advantages that St. Ed's provides for its students is the hiring of Equity actors for almost every show they produce, thus allowing the students to work with proven professionals. While there have been times in the past when the pros didn't really seem to have anything on the amateurs, that's not the case here; both Carsey Walker Jr., as son and husband Walter Lee, and Kathryn Gagnon, as the matriarch of the Younger clan, deliver moments of tremendous power and depth. Gagnon in particular deserves notice; the role of Mama demands not only maturity and experience but acting chops as well, and Gagnon provides all of that and more.

While the show has so much to recommend it, one problem in particular stands out: glacial pacing. Ultimately, storytelling and real life are two different things, and while I personally believe that theatre should work the same way as life, that doesn't necessarily mean that theatre should try to be life. For instance, the beginning of Hansberry's play revolves around the Younger family getting up in the morning. While I know from experience that it can take forever to persuade both children and adults to get out of bed, that doesn't mean that it should take forever on the stage, as it does here. That's only one example; the pace, generally speaking, is slow. However, with a little patience, the rewards of the production are great, as Hansberry's play rings clear and true: A dream deferred is only a dream transformed; with strength, support, and love, all things are possible. 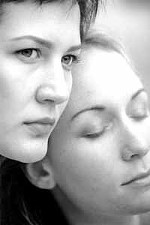