Oh yes, the isolated farmhouse. The unsuspecting inhabitants. The ominous sounds in the night. Something agitating the dogs outside. Something banging on the front door, testing the handle. A stranger blasting through the door, bloodied and breathless. We've been here before. We can guess what's next: a description of the unseen threat, an uneasy alliance between household and stranger, loss of contact with the outside world, loss of electricity, someone forced to go outside, the hunter taking down its quarry one victim at a time. Oh, yes, we relish the tension of this cat-and-mouse game. We know it so well.

And yet, it turns out that we don't know anything -- at least not as the game is played in The Middle of the Night. After teasing us with this classic setup from horror and suspense films beyond number, playwright Lowell Bartholomee adamantly refuses to follow through on the conventions of the genre. The stranger never speaks, never explains himself or what has him cowering in fear. The house's inhabitants, a father and his grown daughter, take little notice of his terrorized condition; in fact, they seem oblivious to any external threat, padding along in their robes, making small talk about ice cream and the proper way to tell a joke.

So, if we're not in Serial Killer Country or the Land of the Living Dead, where are we? Some forgotten hovel on the Beckett frontier? A shotgun shack in Sam Shepard's weird, weird West? A little house on the Pinter prairie? While certain touches -- the allegorical setting, the underscore of menace, the absurdist illogic -- point to work by other writers, the play never solidly lands in any one established dramaturgical camp. This territory to which Bartholomee has abducted us is, in the end, his, and the most we can say with certainty is that things there never quite turn out the way you expect -- in a movie or in life. A terrified man boards up a door to keep something out, and a woman inside with him responds by painting the board. A man points a shotgun at an intruder one minute, the next chats him up like a long-lost lodge brother. As the song says, "Something's happening here, what it is ain't exactly clear."

What is clear is that Bartholomee, who also directs, and the artists he has engaged for this dirigo group premiere have grounded this play in very specific ways. Peyton Hayslip, as the daughter, shuffles over the shabby, nubby carpet and past the dirt-stained walls -- Andrea Cortez's set has the ratty feel of time in it -- with her face reflecting a long-suffering endurance of the crotchety old-man whims of her father -- Travis Dean, gruff with bluster as he tries to rule the roost, but showing in subtle flashes how he's under his child's thumb. Judson Jones loses himself in fear, his constant shiver, darting eyes, and shallow breath a response to something genuinely frightening. Just what it is we're never sure, just as we're not sure of our senses. Robert Fisher's sound is just this side of real, as if some static is preventing it from reaching your ear unfiltered. We recognize the reality of this place and these people, but the way their story is played out is such that we can't be sure of what's coming. We're perpetually off-balance, unsettled.

It's a state that may feel familiar, given the anxiety of our current age. We're conscious of threats somewhere out there, in the dark beyond our homes, and we don't know what they look like or when they'll break in on us. Perhaps we've brushed against one and, like the bloodied visitor, desperately want to defend ourselves from attack. Or like the father and daughter, perhaps we putter on as if nothing is amiss and we're safe as church mice.

Is this, then, where Bartholomee has taken us: into the American heartland after 9/11? Who, besides the author, is to say? That may be one reading, but it's far from the only one. Part of what makes the play fascinating -- if at times frustrating as you watch it -- is its openness to varying interpretations. The simplicity of Bartholomee's construction -- three people, two of whom are parent and child, the third being an outsider; a home and a danger outside it; darkness -- along with its non-naturalistic treatment, allow for all manner of readings: personal, political, psychological, mythological. It's the kind of play that leaves you asking questions ... which can be a very good thing. 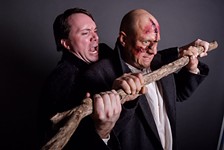 Different Stages' Mary Shelley's Frankenstein
Like the separate parts of the Creature's body, the technical and performance aspects unite to create a delightfully provocative production