Toggling between the real and artificial with Richard Maxwell

Richard Maxwell writes and directs his own plays, for which he also composes original music. Over the last several years, this New York City theatre artist has developed a following with painstakingly realistic language rendered onstage by actors who move, speak, and sing seemingly without expression -- as if awkwardly reciting from some unfamiliar text.

Maxwell visited Austin in January 2003 to present his play Drummer Wanted at the UT Department of Theatre & Dance's Fresh Terrain festival. He returns this week with his play Showcase as part of Cinematexas' Austin Eye + Ear music and performance series, held in conjunction with the weeklong international short film festival currently under way. Showcase is the story of a businessman who attempts to come to terms with his past through a conversation with his "shadow," which appears in his hotel room. Showcase is performed by Jim Fletcher and Gary Wilmes, two longstanding collaborators of Maxwell.

Austin Chronicle: I understand that you're staging Showcase in a hotel room and that only 10 or 15 people can see it at a time. How do audiences react differently to that kind of intimacy?

Richard Maxwell: I can't really guess what goes on in an audience's mind, but for me it feels more personal and maybe more immediate, and I think the proximity of the actors makes some people nervous or uncomfortable. But we don't really put much effort into convincing people that what they're seeing is really happening. It's very clear, whether I'm doing a stage play or a play in a hotel room, that what they're watching is a play.

AC: That's most obvious in the way your actors move and speak. Reviewers write fondly of the acting as robotic, flat, deadpan, expressionless, and yet you've spoken of striving for realism with your plays. Is there any contradiction there?

RM: Well, I think the realism extends only as far as the writing. When I'm staging something, I don't want actors to betray or deny natural impulses, but primarily when I'm talking about authenticity, I'm thinking about the writing. I get a little discouraged when I hear adjectives like "robotic" or "deadpan" applied to what I'm doing, because when I hear it described like that I almost feel like people think I start rehearsals by telling actors that this is a quality I'm going for. But that's not the case at all. That would be really easy actually, to tell people to be deadpan and not emote, but that's not what it is at all. I'm telling them that I don't expect them to pretend to feel anything. It's interesting that when people talk about the absence of anything they apply words like "dead" to it, which is a pretty pejorative view, I think.

AC: It feels like the plays are often experiments with story and structure while the vocal and physical approach seems to be the same. Is that true, or are you trying to do different things even with the speech and the movement from play to play?

AC: What are your fundamentals?

RM: I think I have a pretty good sense of what's true and what's false when it comes to a person being up on stage, and that's what's fueling me, but I feel like I still haven't discovered it. Well, no, there are moments, you know, you get brief moments, glimpses of what the other side looks like, so to speak. So I feel like there is a change actually from show to show in terms of the performance because I feel like I get closer each time, or maybe closer in a different way, to what I'm pursuing.

AC: So if you say you're striving toward something, what would the perfect show be like?

RM: I can't really say. I do know that the comments I've gotten which gratify me are things like, "I felt like while I was watching it I couldn't tell whether what I was seeing was real or fake." Like a switch was being flicked on and off, like a constant toggling between "This is reality" and "This is artificiality." That's a big part of what we work on with a show, telling a story and at the same time acknowledging that we're telling the story. I think that creates a more open experience for the audience to imbue it with what they want, to project onto what they see or feel.

AC: I think that happens especially with the songs in your plays. Typically in musicals, songs come out of moments of transcendence for the characters. Is that true of your songs?

RM: Yeah, except that I try to open up. I try not to create an emotional hierarchy when it comes to determining what transcendence means. With most musicals you could narrow it down to four emotions that the character is experiencing, but I like opening up the experience of song to all kinds of emotions including very prosaic, quotidian feelings. Why not have a mild transcendence or a mild moment, and a song comes out of that?

AC: I get the feeling you see a lot of theatre, whether musicals, plays, or performance. Is there anything you wish there were more of in the theatre you see?

RM: I wish I would see more of people bringing themselves to what they're creating. So much of what I see doesn't interest me because it's a nod to what has preceded it, and I wonder where the person is, where the impulses are coming from. It's hard to say what the motives are, whether it's deliberate or accidental, but I think there's a carrying of clichés from show to show. The stuff that excites me most is that which indicates a person in touch with their own instincts and impulses. 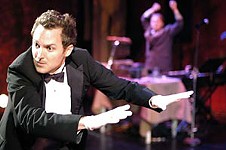 Payback as Comeback
The Rude Mechs boost a resurgence with 'REVENGE!' 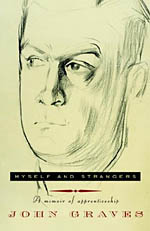 The Long View
John Graves' 'Myself and Strangers': wisdom as a work in progress