Speaking Out From the Border 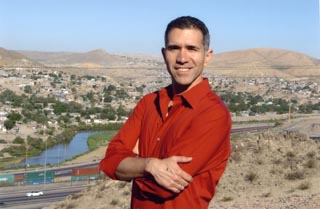 Chicano scholars and artists have often used the U.S.-Mexico border to explain the Mexican-American experience in a well-established body of scholarship now known as border studies. A new play by Gregory Ramos, Border Voices: An Intimate Theatrical Montage About Sex, Fear, and Love on the US-México Border revisits the complex symbolism of the border, not in academic language, but in the personal stories of gay, lesbian, bisexual, and transgendered individuals living in El Paso, Texas; Juarez, Mexico; and Las Cruces, N.M.

"The popular media has put forth specific ideas of gay culture, but how people live their daily lives is a different question," Ramos says. With some exceptions, gay life in popular culture is expressed as an urban, Holly Golightly experience or steeped in the beautiful pain of lives lost to illness, identity crisis, or worse. Culture, class, ethnicity, religion, and family are afterthoughts -- if considered at all -- although they are very real filters to the gay experience, even in a place as far removed as the U.S.-Mexico border.

Ramos comes to Austin as an artist-in-residence at ALLGO (Austin Latino/Latina Lesbian, Gay, Bisexual & Transgender Organization). A Los Angeles native with a 20-year theatre career split between L.A. and New York, Ramos now teaches Chicano theatre and playwriting at UT-El Paso. Moving from Los Angeles to El Paso four years ago was a shock, Ramos admits. But it was that culture shock that prompted him to research and write Border Voices.

"I literally went into bars with fliers asking people to talk to me," Ramos said of his work collecting 50 first-person interviews, later trimmed down to the 20 monologues of Border Voices. "At first there was some fear to come forward, but once word spread that I wanted to give voice to those who felt their voices had never been heard, the process got easier." Most of the transcribed interviews are now at the Oral History Institute at UTEP.

Border Voices represents the demographics of El Paso and includes: Coca, a transgendered 31 year old; Eddie, a teenage ex-hustler new to El Paso; Darryl, a 75-year-old gay man who was married to a woman for 25 years; Yolanda, a Chicana lesbian history professor; and 52-year-old José, a peer advocate at an El Paso AIDS clinic who is HIV positive. The 10-person cast includes faces new to the stage as well as experienced performers such as Julie Fontenot, Irene Gonzales, A. Daniel Ramos, and Timothy Verret.

"Being in El Paso has reformed my ideas of theatre and how it can work," Ramos says. "In this country, theatre is seen as something for affluent people who can afford a $100 Broadway ticket. I've found that when I present theatre that reflects the community's experience, the community comes to the theatre. Though not financially rewarding, the spiritual rewards are so much more."