If It's Summer, It Must Be Shakespeare

In this season of the bard, the men are men and the women are, too 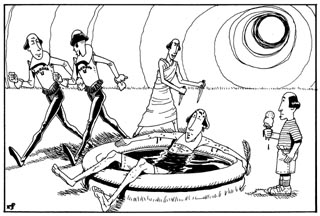 Summer is the time for Shakespeare. Dozens upon dozens of companies throughout the country spend the vacation season producing little but the Bard's plays, and the Austin area is no exception. Kicking off our local Shakespeare season are a tragedy and a comedy from two of Austin's oldest theatre companies. What's strange is that, despite the prevalence of summer Shakespeare and the fact that one of the companies is our own Austin Shakespeare Festival, neither company initially chose a Shakespeare play to fill this particular slot in its season.

Paul Norton recently won a special citation from the Austin Critics Table for his body of acting work this past season, and he is a former artistic director of ASF. While, with his sharp features, almost hairless dome, and large-framed body, he's an imposing figure, in actuality he's as personable a Brit as you'd ever want to meet.

Austin Chronicle: How did you end up choosing Julius Caesar to kick off the summer?

Paul Norton: Guy Roberts [ASF's current artistic director] decided to form an acting company for the festival, and in April last year, he had open auditions and chose 40 people. The idea was that you would cast all your shows using this company of actors. Of course, 80% of the people who auditioned were women, and if you cast traditionally with Shakespeare it's a no-hoper for all of them. Shakespeare just didn't write very many female roles. We wanted to redress the balance. Guy mentioned to me that he wanted me to direct something in this season, and I asked to do something predominantly female -- so, of course, it couldn't be Shakespeare. I didn't want to do Lysistrata [Aristophanes' Greek comedy about women ending the Peloponnesian War by withholding sex from the men] because that's the first thing everybody thinks of if they want to do something classical with a lot of women in it. I wanted to do Electra because it was a small cast and it was the Frank McGuinness translation, which is very new. Also, it's a cast of six and only one man in the whole play. But the rights were too expensive, and I was running out of ideas. I had once heard about someone doing an all-female Julius Caesar, and they said it was a pretty interesting production but wasn't very successful because all the women were pretending to be men, talking in deep, gruffy voices and painting little mustaches on. I've always kept that story in mind, and I've always loved Julius Caesar. So I went to Guy and said, "How about just using the actresses in the company, but let's just for the heck of it cast a man as Caesar and see how that alters the dynamics." And he thought that was a pretty good idea, so that's what we did. Tom Green is playing Julius Caesar, and he's absolutely gung-ho about the idea of being stabbed by six women several times.

AC: So what's it like having women playing all these roles so heavily identified with men?

PN: The first question that came out of everybody's mouth was, "Well, what do we do? Do we tie our hair back?" And I said, "Well, maybe. I don't know. But I do know I don't want you to pretend to be men. I want you to discover what you can do with those characters as actresses." I didn't really have any preconceptions going in about what I wanted to do. I certainly didn't want it to be some sort of feminist statement. I just wanted to see what would happen if I cast a bunch of actresses. And it's already very interesting. I'm trying to approach every scene without any kind of preconceptions about what this huge chunk of nontraditional casting is going to do to each scene. So far, it doesn't even seem to be an issue, and I think that's because the material's so good. There are so many references to masculinity, but no one has said that it's too weird or doesn't work. It does work.

AC: While you may not have started out to make a political statement, don't you think you are making one?

PN: Well, sure, in hindsight. Caesar was riding above the pack and attempting to change the sociopolitical makeup of Rome. And everybody else, for whatever particular reasons they had, wanted it not to happen that way. And the only way they could fix it was to get rid of the person who represents the change. So, it could well be that I'm making a political statement by the way I'm doing the play. One thing I discovered early on in rehearsals is that it's a very different atmosphere when it's almost all actresses. It's a lot more cooperative. There's not as much competition, a lot more support, a lot more democracy, less vying for attention. And I'm absolutely sure that's because it's all women. Any decent male will concede that women are much more adept at sociability then men. Men work out their democracy by throwing stuff. Women talk things through. The more I see how the actresses work together, the more they convince me that somehow making a political statement may have subconsciously been in my mind.

Norman Blumensaadt has been producing plays in Austin for 23 years and is, at present, Austin's longest-active artistic director of a theatre company. A couple of years ago, he won a well-deserved lifetime-achievement award from the Austin Circle of Theatres. He is an inveterate theatregoer, and his knowledge of theatre, especially of productions of Shakespeare in America, is astounding.

AC: So how did Two Gents end up in your season?

Norman Blumensaadt: Two Gents wasn't the original play. The whole idea was to do Lorca's The House of Bernarda Alba, which is a play by a repressed Spanish homosexual with an all-female cast, and balance that out with Love! Valour! Compassion!, a play by an American yuppie homosexual (from Texas, no less) with an all-male cast. I had looked at Bernarda for a long time, and I always said to myself, "Oh, I hate the character of Bernarda; I can't be in a room with her for six weeks," and Love! Valour! Compassion! won the Tony, but in my humble opinion it's not his best play, and I think it's just a tad long by a half hour. I have a tremendously long list of plays that I'd like to see done, and there are always problems that you have to address, but this year these two seemed to fit. Then I found out that Zachary Scott [Theatre Center] was planning to produce Love! Valour! Compassion! So then there are all these conversations with Ann Ciccolella [the managing director at Zach]. They're not going to do it; they're going to do a one-man show with Jaston Williams. Then no, Jaston Williams is going to do Love! Valour! Compassion! Of course, neither of those scenarios came to pass, but Zach did decide to do Love! Valour! Compassion!, so we felt like we had to replace the play.

AC: And you chose Two Gents.

NB: Actually, I came up with two comedies, either Reverse Psychology by Charles Ludlam or Two Gents, which I had thought about for a very long time. The technical difficulty of a Ludlam play is fairly hefty because you always get into it and you go, "Oh! There's another little device that has to work every night on cue or it's not going to be funny." On the other hand, we hadn't done a Shakespeare for almost eight years, and the reason I wanted to do Two Gents was that every time you got into the room with actors with Shakespeare, everyone would freeze up because either they were confronted with doing the famous speech [e.g., "To be or not to be"] or the language is too difficult. So I advocated Two Gents because it has neither of those things. Fun and light and silly and dumb and not much to say above and beyond men think with their dicks. And, of course, you have the dog, and we're doing it with a real dog. I've seen it done before with a hand puppet. I also saw a production in which they cast an actor and made him up to look like a poodle.

AC: But Shakespeare wrote it for a dog.

NB: Of course. So we've got the actor, we've got the dog, and they're learning to work together, and the brilliant thing about Shakespeare is that he's written the lines so that, no matter what happens with the actor and the dog, everything is fine. We've cast this wonderful young bulldog named Briggs, and you know bulldogs have these wonderful crushed faces and these tongues that go for days, that are like 2 or 3 inches wide. But they're still short and funny because the body is all muscular and the legs are teeny-tiny, so he looks really funny going up the steps on the set.

AC: Don't you usually do a murder mystery this time of year?

NB: Some people don't like murder mysteries, and some people don't want to see murder mysteries produced, regardless of the fact that the murder mysteries were in our season primarily because they make money. The last murder mystery we did made lots of money, and when you're running a theatre, every once in a while you've got to pick something that's a crowd-pleaser and is going to pay for the other things that you want to do. Hopefully this will happen this year with Shakespeare. Of the seven Shakespeares we've done, only one lost money. Shakespeare has a big audience, period. Shakespeare festivals are all over the country, all over the globe, done everywhere. I'm sure if you were to tally up in a year the number of Shakespeare productions, the number of performances -- you know, big box office. I guarantee you, Agatha Christie and her fellow playwrights will return.