The 2003 class of the Austin Arts Hall of Fame

They are Austin's cultural heroes. They are individuals who have founded local arts institutions and nurtured their development, pioneered forms of creative expression on the stage and on canvas, and shared their knowledge and experience with new generations of artists. They are the artists, the educators, the patrons, and the advocates whose talent and achievements and steadfast commitment to the arts has been instrumental in the development of the lively cultural scene flourishing in Austin today. Last year, the Austin Critics Table, that loose affiliation of local arts writers that recognizes outstanding creative work in the city every year, established the Austin Arts Hall of Fame as a way to recognize the contributions of these cultural heroes. The first individuals to be inducted were John Aielli, Paul Beutel, Ruth Denney, Acia Gray, Deborah Hay, Kent Kennan, Joe Sears, Jaston Williams, Michael Shelton, Shannon Sedwick, Judith Sims, and Jess Walters. On Monday, June 2, they will be joined by another dozen of our finest artists and friends of the arts when the Critics Table presents the Hall of Fame induction as part of its annual awards ceremony at the Capitol City Comedy Club, 8120 Research. Herewith is an introduction to this year's class of inductees and some of their contributions to the local community.

Nearly 40 years ago, James Ayres began teaching Shakespeare at UT-Austin with what was then a revolutionary method: Have the students perform the plays. Speaking the lines and inhabiting the characters themselves helped them develop a personal understanding of the great playwright's works as living texts. Then, in 1970, when legendary philanthropist Ima Hogg challenged Ayres to stage something by the Bard in a barn on UT's Winedale property 90 miles from Austin, Ayres founded the Shakespeare at Winedale program. Now in its 33rd year and known the world over, the program has given hundreds of students a deeper appreciation of the Bard and greatly affected Austin theatre, inspiring alums to theatrical endeavors in Esther's Follies, Boxtree Players, Rude Mechanicals, Austin Shakespeare Festival, Bedlam Faction, and many other companies. Ayres has received the Ima Hogg Cultural Achievement Award, several awards for teaching excellence, and the Civitatis Award for "dedicated and meritorious service" to UT.

Growing up in the smallest county in Tennessee, Oscar Brockett had next to no exposure to theatre. But that didn't stop him from writing the book on the subject -- literally. After turning to the dramatic arts in graduate school, he penned The History of the Theatre, as comprehensive a text on the subject as has ever been written, and one used the world over, from the U.S. to China to Israel to Iran. His 10 other books, including The Essential Theatre, are just as widely appreciated. He came to Austin 25 years ago as dean of the College of Fine Arts (just in time to oversee construction of UT's Performing Arts Center) but has spent most of his time teaching history and criticism in the Department of Theatre & Dance, which named a theatre in his honor in 2001. He has received lifetime achievement awards from the Association for Theatre in Higher Education and the American Society for Theatre Research.

You'd be hard-pressed to find one person who has brought more voices together in Austin than Morris Beachy. In the 45 years he has lived here, he has founded nine choral groups -- for both trained and untrained singers, on the UT campus and off -- conducted countless concerts, and served as Austin Lyric Opera's chorus master its first six seasons. Thanks to him, UT has been blessed with the Longhorn Singers, UT Chamber Singers, and University Chorus, among others, and the city has enjoyed the Austin Choral Union and Austin Choral Artists. Beachy spent 36 years on the faculty of the UT School of Music, where he headed the choral program. Now the Morton Meyerson professor emeritus, Beachy continues to lead his current ensemble, the Morris Beachy Singers, which has toured extensively across the U.S. and through Europe. In addition, Beachy is an accomplished singer, his baritone having enriched numerous concerts through the years.

Preserving the architecture of the past has been the mission of Wayne Bell, and Austin is the better for it. As a partner of Bell, Klein & Hoffman, he helped oversee the restoration of the Paramount Theatre, Littlefield and Hirschfeld houses, and Austin History Center. As a UT professor, he established the master's program in historical preservation at the School of Architecture and for three decades taught aspiring architects the value and methods of historical preservation. Like James Ayres, he was intimately involved with Winedale, taking students there to study restoration techniques and serving as the center's director. He founded the Historic Sites and Restoration branch of the Texas Department of Parks and Wildlife, was the first state restoration architect with the Texas Historical Commission, and chaired the Historic Landmarks Commission. He received the Sue and Frank McBee Visionary Award from the Heritage Society of Austin and the first Texas Medal of the Arts in Architecture.

As an artist, Kelly Fearing has been an explorer restlessly searching for landscapes beyond the longhorns and bluebonnets that have preoccupied so many Texas artists. As a young émigré from Arkansas in the 1940s, he was among the first in the state to explore modernism as a member of the Fort Worth Circle, a group of artists that included Bill Bomar, Blanche McVeigh, Veronica Helfensteller, and Dickson Reeder. He moved to Austin to teach art at UT in 1947 and stayed there 48 years, during which time he co-wrote textbooks on art education and helped develop many successful artists. But all the while, Fearing was experimenting with figuration, abstraction, color, and various media, from graphite, charcoal, silver point, and paint to montage, collage, and found objects. His continuing exploration of form and subject opened up a world sometimes described as "mystical," as in the title for his 2002 retrospective at Flatbed World Headquarters. 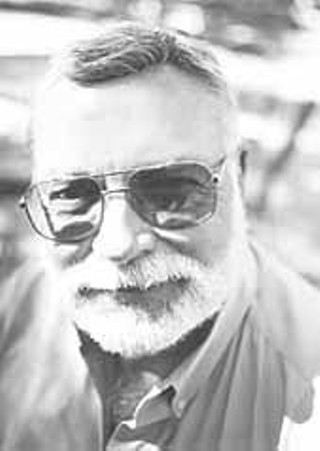 To say that Alfred and Ellen King support the arts in Austin doesn't do this couple justice. They are devoted to the arts here. Since 1960, they have supported a wide range of cultural organizations, giving generously of their pocketbooks -- as with the Alfred and Ellen King Endowment in Printmaking which supports the Guest Artist in Printmaking Program at UT -- and of themselves, through their service on the boards of many arts groups. Ellen has served on the UT School of Architecture Advisory Council and the board of the National Museum of Women in the Arts, among others. Alfred has been working with the Austin Museum of Art since its days as Laguna Gloria Art Museum and chaired both Austin Lyric Opera's board and UT's Fine Arts Advisory Council. Nicknamed "Mr. Arts," Alfred was acclaimed as Austin's "Most Worthy Citizen of 2000" by the Austin Board of Realtors and received the William E. Doty Award for service to the arts and education of UT students.

In the days when Austin saw little dance, period, much less dance of cultures outside the U.S., Gina Lalli brought to town Indian classical dance and pioneered its performance here. Trained in New York and India, Lalli has been a cultural presence in Austin since 1971, performing, as she did for years at Capitol City Playhouse; passing her knowledge to other dancers, such as Z-Helene; and serving the arts community as a peer review panelist for the Austin Arts Commission, which earned her a "Volunteer of the Year" commendation from the Austin City Council. Though more apt to be recognized for her film work as the Sidewalk Psychic in Slacker, Lalli prefers the stage and is still active on it. This year she performed the duet Garden of Dreams with José Bustamante for Sharir + Bustamante Danceworks and was in the cast of the Bastrop Opera House's award-winning production of Playhouse Creatures.

Seventeen years ago, Austin didn't have a professional opera company, and two men wondered why not. When they couldn't find a reason, Walter Ducloux and Joseph McClain mounted a production of The Magic Flute, and Austin Lyric Opera was born. At the time, Ducloux had recently retired from the UT School of Music, where he had taught since 1968. Before that, the Swiss native's distinguished career had included working with Arturo Toscanini, who encouraged Ducloux to move to the U.S. in 1939; serving as interpreter for Gen. George Patton during World War II; conducting the Czech Philharmonic, Czech National Opera, and Ballet Russe; heading the opera program at the University of Southern California for 15 years; and appearing on the Metropolitan Opera Quiz for 25 years. Oklahoma-born McClain, meanwhile, had spent the previous decade in Germany, where he made the transition from professional singer to professional director. Launching ALO with McClain as general director and Ducloux as music and artistic director, the two built the company into a regional powerhouse in less than 10 years. Ducloux, whose honors included medals from the U.S. Army and the governments of Italy and West Germany, retired from ALO in 1996 and passed away in 1997. McClain, named Best Stage Director and Best Missionary for the Arts in the Chronicle's "Best of Austin" polls, was fired by ALO's board in 2002.

Classical music may seem stuffy to most folks, but it's the stuff of comedy to Lyova Rosanoff. The native New Yorker and Austinite since 1968 has been making light with great works of the concert hall since the early days of Esther's Follies. She is responsible for many of the troupe's most popular musical numbers, most notably the "Jalapeño Chorus," which shifts Handel to a Tex-Mex joint and has become an Austin classic. Rosanoff is also the Follies' longtime accompanist and, 25 years into its history, can still be found tickling the ivories on the white baby grand and providing the soundtrack behind the comedians on stage. Periodically, she has broken free for independent events such as the Austin Flops Orchestra or Forbidden Classics, in which she and comedic cohort Steve Saugey have been able to devote an entire program to their ingenious (and hilarious) pastiches of classical compositions.

For 60 years, Ralph White has been a Texas artist, but he is no more a representative of the landscape-with-bluebonnets school than Kelly Fearing. This painter, who hails from Minnesota, favors intricate abstract works. An Air Force gig during World War II brought him down to the Lone Star State, where he met artists who helped him get work after the war teaching at what was then still a fairly new art department at the University of Texas in Austin. Over the next 36 years, he taught an array of classes, from drawing to commercial art, and developed many now-active artists, among them Charles Shorre, Kuo Yen Ng, and Jo Alys Downs, and headed the department. Since 1982, he has been a professor emeritus, and he continues to develop his work. A retrospective exhibition was mounted at Gallery 1313 last year, and White was recently named Texas State Two-Dimensional Artist for 2003.