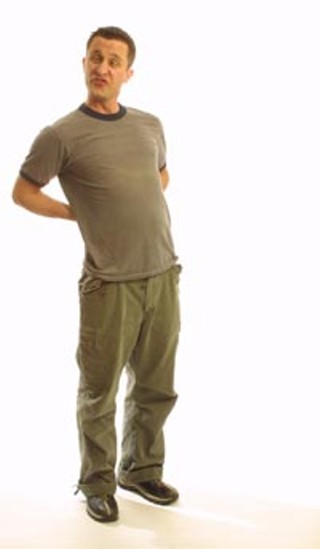 Holy Cross Sucks!: One for All

The Vortex, through May 31

The multi-multitalented Rob Nash plays 29 parts and strings together four of his old plays in the hilarious Holy Cross Sucks! The play opens with a 1980s Houston high school -- nothing but a chair, a bench, and his own facial and body expressions decorate the stage. Nash becomes the central characters so fully, it's easy to mistake him for three old school friends. Fat, nervous George; gay, romantic Ben; and angry, creative Johnny Downs come to life more than most real teenagers.

The story's thrust is the musketeerish friendship that propels the boys through four tough years from timidity to freedom via New York. Unteacherlike English teacher Fred Smith inspires the boys to maintain a kind of stoned poets society despite falling-outs, coming-outs, parents, pregnancies, and deaths.

Nash has reshaped the "Holy Cross Quadrilogy" material that he developed over the last six years. The performer's familiarity with his creations makes them play with the endearing fluency of a seasoned team. But the collage approach feels like an abridged version of a Dumas novel -- too much happens too quickly -- cutting and pasting storylines means that some tether off and others don't look right.

The bit parts are crueler and often funnier impersonations than the central characters. It is difficult to look at the caricatured face of Norman Normal -- pressed against some invisible window -- or listen to his guttural sniffling without laughing. Does every Catholic boys school include a fan of sci-fi and 64-sided-dice games like Normal who "could kill you right now if [he] wanted"?

Nash heats up an old chestnut in the conflict between the adolescents and their parents. One of Nash's inch-perfect moments comes when Mrs. Downs turns from the passenger seat to face her punk rebel son Johnny as her husband steers them steadily to the first day of freshman year. Mother suggests trying out for baseball; father mutters that he played baseball in high school; mother points out that father played baseball at son's age; son shouts he doesn't like baseball.

Another joke that could run all night is George's overbearing father and his increasingly insulting epithets for the teachers: "Pope-worshipping," "transubstantiated-wafer-eating," "ring-kissing" Jesuits.

Overardent revolutionaries also make for good comedy. Ben tells his friends he is going into the priesthood. "Religion is the opium of the people, and you just told me you're going to be a dope pusher," says Johnny.

Director Jeff Calhoun recognizes Nash's ability to communicate traits with the slightest movement. The way George habitually holds his belt tells more than all the verbal back story about losing his mother. The only points where Nash breaks the comedy or his credibility as a teen is when he allows the boys to talk about themselves and what their friendship means.

James Reiley and 101X's Brad "Whipping Boy" Hastings segue scenes with the tactical and humorous use of Eighties tunes.

New York's presence as a symbol of freedom and breakthrough hints at one of the reasons for Nash's reworking: his designs off-Broadway. In the play's most lyrically attractive speech, Nash compares life in the Big Apple to loving a drunken poet: "She'll fray your nerves and drain your pocket. The bitch."

Nash's return to Austin is as funny and memorable as the best and worst of schooldays.