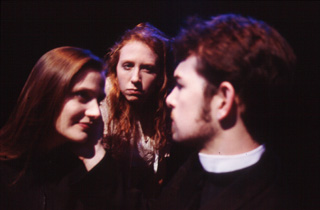 The Scarlet Letter: A Recurring Nightmare

The Vortex, through March 29

There she stands, that damning A emblazoned on her breast: Hester Prynne, just as we remember her from the Nathaniel Hawthorne novel that bedeviled us so in high school. Yes, she's still on the scaffold in the town marketplace -- punishment for the sin of adultery that left her with an illegitimate child -- and still defiantly refusing to name the child's father to the unforgiving puritans of colonial Boston. This is the Hester we know, and yet ...

Her black dress and white bonnet, which at first glance suggest the fashions of 18th-century New England, reveal on closer inspection a modern, streamlined cut. The lines she speaks are not the florid, formal speech penned by Hawthorne but the clipped and casual chat of contemporary conversation -- and they drip with an irony that reeks of the end of the 20th century. This is a Hester of a different time, our time, as seen through the eyes of playwright Phyllis Nagy and shown to us by Nagy through the eyes of Hester's daughter Pearl, the love child of her affair with the Rev. Arthur Dimmesdale. Nagy makes Pearl -- a 7-year-old during most of the novel -- an adult here, introducing the story, recalling her birth in prison, commenting on the characters and events after, as well as reliving her own role in the story that literally haunts her.

"My nightmares begin and end with the letter A," Pearl tells us, and as the phrase reverberates in electronically distorted echoes, this Vortex Repertory Company retelling of Hawthorne's more-than-twice-told tale feels like it's coming from a fitful, troubled sleep. The scaffold and the doorway to Hester's home are worn with time and surrounded by overgrowth in which lie tombstones. Barren limbs claw the air, with long and bony branches pointing accusingly at Hester and any transgressors who must be punished. Fog permeates the air, lending a feverish glow to the faces caught in the crimson-and-amber shafts of light, a deathly pallor to those pinned by beams of blue. Scenic designer Ann Marie Gordon, lighting designer Jason Amato, and sound designer Chad Salvata have crafted a heightened version of the haunted wilderness of Hawthorne's America, and like the hazy dreamscapes of Vortex's previous literary adaptations -- notably last year's Lovecraftian opera The Music of Erica Zann and the Melville sea-tale Moby Dick -- we are immersed in it, the atmosphere filling all our senses.

Within this atmosphere of dread, director Michelle Fowler and her cast create a society of suffocating morality and the cruel reprisals that await any who violate its rigid rules of conduct. Fowler employs a stately, deliberate pace, which, while sometimes giving the play a lulling quality, creates the rhythm of a slow, steady march to punishment. Amie Elyn's sinister Mistress Hibbins and Zachary Crofford's haughty Gov. Bellingham, who project a piety puffed up into superiority, look to take keen delight in such retribution, as does Steven Fay's Roger Chillingworth. Radiating a cool, calculating intelligence, he's a figure in whom malevolence has swollen like the hump on his back. Wendy Goodwin's Hester has a spine of iron, and her erect bearing in the face of these taunting tormentors is almost heroic -- which makes a scene in which Chillingworth coerces her into bowing to him especially gripping. She does it for Dimmesdale, and Goodwin makes her love for him credible, despite the fact that Ryan Sullivan's Dimmesdale is debilitated, a man in the throes of a fatal illness: The secret of his affair with Hester is a cancer eating away at him.

Dimmesdale seeks to keep his dark secret hidden, and the deep black of his clothes comes to seem like a means of hiding the secret he doesn't wish the rest of this harshly judgmental community to see, and the same goes for Kari Perkins' stylish antique/modern outfits for Hester, Hibbins, Bellingham, Chillingworth, and even Henry Fitzgerald's affable Master Brackett. Only Pearl, dressed by Perkins in the pink of a newborn's innocent flesh, who hides nothing and speaks unvarnished truth -- a trick at which Courtney Hopkin is eerily effective -- escapes the blackness in which the rest wrap and lose themselves.

They lose themselves in darkness -- and for what? In an epilogue explaining the final fates of these characters, Nagy reinforces Hawthorne's notion that the terrible importance of these awful secrets fades with the passing of years. In time, what sins were committed, what punishments bestowed, the reasons someone wore an A, are lost. We may have forgotten that about Hester and her crime in the years since high school; here we are reminded of it in a manner that will make it much harder to forget.