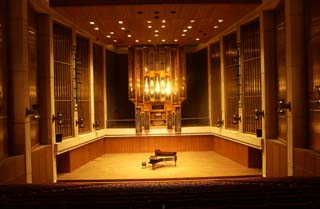 A picture might be worth a thousand words, but for certain things only the thing itself will suffice. Imagine a machine that transcends its machinery, all vertical and horizontal lines, polished and reflective oak and copper and brass, that seems to float in the middle of space and draws the gaze of the observer upward, ever upward, but serves no practical purpose except to make music. Not just any music though -- beautiful, sublime music, rich and varied music, music both subtle and grand. Majestic, unimaginable music. The music of the spheres.

Such a thing exists here in Austin, and it goes by the moniker Visser-Rowland Tracker Organ -- a rather plain name for such an awesome instrument. A tracker organ is based on an ancient idea: a system of keys attached to strips of wood that, when moved, allow air to flow into pipes, which in turn make sounds -- 5,315 sounds, to be exact. Some of the pipes are as small as pencils, some as large around as a person's thigh and towering high above the stage, with not a hint of the electric to be found in the organ itself.

I was fortunate enough to be invited to tour the organ with its keeper, Frank Speller, associate professor of organ and harpsichord at UT-Austin. I sat on the bench, quite literally inside the organ, surrounded by the four keyboards, more pedals than I could count, and pipes galore, and watched and listened as the charming Dr. Speller made music that awed me and made me laugh. But don't think I'm special, because you can do the same thing: listen to glorious music made by a machine that seems alive, step inside the machine and spend some time with it, meet Dr. Speller and the organ's designer, Piet Visser, and benefit the Bates Recital Hall Great Organ Series, as well. This Sunday, March 16, at 2pm, the UT School of Music is hosting a special recital for the 20th anniversary of the Visser-Rowland Organ at Bates Recital Hall. Dr. Speller will perform works by Buxtehude, Couperin, Bach, Franck, and Widor, then Visser will talk about the great instrument and lead a tour of the organ loft. Tickets are $10 or just $5 if you have a UT ID, and help ensure that future audiences will be able to enjoy the mighty Visser-Rowland's majestic music.

Such a deal. What are you waiting for?