Kentucky by Way of Austin

Robert Schenkkan's nine-play Pulitzer Prize winner, 'The Kentucky Cycle,' is staged at last in his hometown 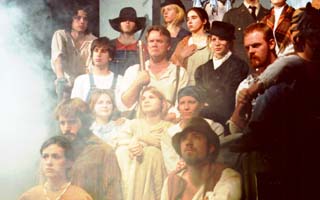 In six hours of theatre, you traverse two centuries of American history, from the settling of the frontier through the sundering of the Union through the raping of the land for coal and the beating-down of the people who mine it. It's an epic journey through the evolution of the territory called Kentucky -- revealing in nine episodes the changes that have come with the conquest of the wilderness and war and industrialization and the timeless ties that bind generation to generation: bloodlines and dreams and betrayals born of corrupted hearts.

With its breadth of scope and blood conflicts that echo Greek tragedy, The Kentucky Cycle is one of the most ambitious theatrical works of the past generation. It was awarded a Pulitzer Prize for Drama in 1992, and that year I was privileged to witness one of the Cycle's first productions at the Los Angeles Theatre Center. It remains a highlight of my theatregoing life. The play provided a compelling view of the making of this country from the inside, through the lives of men and women whose actions were grounded in passions and jealousies as primal as the coal stripped from the rock beneath their feet. An ensemble of valiant performers, each playing multiple roles, threw themselves into these tales, venturing deep into the souls of its characters to the dark and dangerous places from which they pulled forth raw emotion and striking drama.

Now, a decade later, Austinites have the opportunity to experience The Kentucky Cycle's power in their hometown with a homegrown production at Mary Moody Northen Theatre. As it's only the second of the epic stage dramas of the Eighties and Nineties -- Nicholas Nickleby, The Mahabarata, Angels in America, The Kentucky Cycle, marathon presentations of Shakespeare's histories -- to be mounted in Austin (Angels was first), that alone makes the arrival of The Kentucky Cycle noteworthy. But the production has a deeper connection locally: playwright Robert Schenkkan, who grew up in Austin and is a graduate of Austin High and UT-Austin. Given that, the city is long overdue for a production of his remarkable work, but of course a nine-play cycle isn't something that can be mounted casually. It requires a massive commitment of resources and talent.

Melba Martinez, who is directing the production at St. Ed's, understands that. She has taken care to fill her cast with actors of experience -- Ev Lunning Jr., Annie Suite, Bhagirit Crow, Stephen Balgooyen -- as well as gifted university students. Martinez held auditions last summer and started rehearsals seven months ago. Performers have been taking specialized classes in acting, singing, and even clog dancing for the past two months, and last month they spent 12-hour days in training. This week begins the payoff to their months of labor and the true test of their stamina: They will perform the first and second halves of the cycle on alternating nights -- Part One on Wednesdays and Fridays; Part Two on Thursdays and Saturdays -- then offer the entire cycle on Sunday. Trust me, it's worth seeing the whole work in one day; it's all too rare that we have the opportunity to get caught up in the sweep of time and humanity this way.