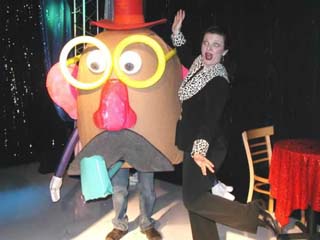 Portrait of Conspirare: Brilliant, as in Diamonds

What to take on a trip to New York City? Local chorus Conspirare, on its way to the American Choral Directors Association convention with performances in hallowed venues Carnegie Hall and Lincoln Center, has packed for all temperatures and moods. Having looked through its song wardrobe, Conspirare picked out and tried on what amounted to two programs Friday night: a book-in-hand collection spanning Renaissance to modern works and a post-intermission presentation of the New York set, which included a mostly modern collection of songs ranging from the flowing to the formal, the basic to the brash.

For New York, the chorus has something cool and moving, in two of Brahms' Drei Gesange; it has the jaunty, full-voiced Dance, Clarion Air by Michael Tippett; it has a few darkly melodic pieces of Herbert Howells' Requiem, which show off Conspirare's exceptional ability to evoke rich moods; then there is Ruth, by young composer Paul Ayres, evocative and mesmerizing; finally, there is the up-tempo, poplike collage of dance-themed songs -- as Artistic Director Craig Hella Johnson explained, no matter how it tries, the group just can't seem to stop dancing when it gets the opportunity. All the selections for New York are highly accessible pieces, strong and affirming, if tending just a little toward safe. They certainly show off the company's range. And the company appears quite comfortable with them and clearly loves to perform with Johnson in the lead.

Of the material not making the trip, a few pieces rendered the New York wardrobe a bit plain in comparison. The evening opened with Anton Bruckner's Os Justi meditabitur sapientiam. It and the following O vos omnes by Renaissance composer Ludico Tommaso da Vittoria were simply remarkable. If Craig Hella Johnson and the members of Conspirare have a certain stamp of uniqueness, it is their ability to turn their sheer vocal power to a brilliant, distilled quietness that still resonates as if the roof were shaking. Brilliant, as in a diamond's brilliance -- the sections of these two songs where the chorus got quiet were breathtaking: clear and sharp, still retaining all that power. Likewise, in Kevin Oldham's "Small Flowers," one of three selections from The Boulding Chorales, the alto sections' hum -- a sine wavelike subsong, weaving through the piece -- offered another aspect of the chorus: its daring. Johnson and company are unafraid to explore all aspects of choral singing. "Are There no Armies?" followed, bursting forth with a huge sound, radiating energy.

In the dramatic conclusion to the dancing collage, pop music enthusiasm turned into a philosophical entreaty for "One earth, one people, one love," a moving, timely idea to take to New York. In this 10th anniversary season, Conspirare should feel confident that, given its many strengths -- from its mood-bending vocal abilities to its buoyant charisma -- New York should take to it, too.