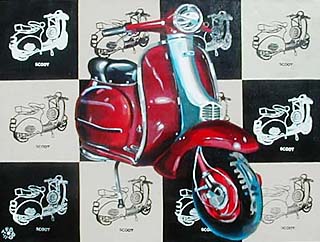 Who is Tim Doyle, and why should you care?

Doyle himself might not be able to answer that question in person. He's one of those self-deprecating artists, more willing to trumpet and gush over the achievements of others than to speak of his own work. Oh, sure, he'll mention that his big painting of G.I. Joe's Cobra Commander was recently sold for $1,000.

When pressed, he'll almost blushingly relate how his colorful acrylics of Austin street scenes and Vespa scooters and vintage telephones pull in hundreds of dollars from "people who, I guess, like that kind of stuff, you know?" He'll even speak of creating, in his efficiency apartment, the wall-sized backdrop for Salvage Vanguard Theater's The Intergalactic Nemesis Redux -- although he'll mostly dwell on how he accidentally spilled black lacquer on the carpet. "The stain just wouldn't come out, no matter what I did. I mean, it's pretty big and -- Jesus -- it's still there. Accusing me." But Doyle really gets going about what other people are doing.

"Do you know Ethan Azarian?" he asks. "You should see those in-house gallery shows of his. He clears out his entire house and fills it with his paintings, and it's ... it's incredible. Art everywhere! He asked me to do an exhibit with him, and it was, wow, what an experience. But just watching the man work is a little staggering -- he's like a machine. And Rachel Koper, who runs Gallery Lombardi, she does such a great job over there. She's got a really good eye for art, always pulls in a bunch of great artists. Of course," he adds, frowning, tugging at his black fringe of beard, "she likes my stuff, so maybe I shouldn't, well ... she's great, she's terrific."

Doyle's admiration extends beyond Austin, naturally -- especially in the realm of comic books. "Chris Ware does all that lettering by hand, can you believe it? All those covers for Acme Novelty Library? And that's amazing enough, all that beautiful design, but -- you know the introduction to the Acme Novelty hardcover? It's two pages of nothing but text, just regular text, and he letters that by hand! What is that, obsessive-compulsive disorder? God, he's a genius. ..."

Doyle, too, dabbles in the art of the comic book. In fact, it's his main nonpaying gig: producing monthly issues of Amazing Adult Fantasy, a day-by-day journal of his life, from the details of his day job -- he works at Funny Papers, the comics shop in Dobie Mall -- to the movies he sees and the parties he attends, to the highs and lows of his love life, to everything he reads. "You have to mention Snakepit," he insists. "You can't talk about my comic without mentioning Ben White's Snakepit."

Doyle is also the man responsible for Sally Suckerpunch, a comic featuring the exploits of the titular teenager and her pal as they fight anti-fun robots and carouse through a world like our own but weirder. "It's a lot of fun," he says, "and totally inspired by Paul Pope's THB. It's something for the kids, something all-ages friendly and a bit more accessible than just my own stupid life panel after panel."

That life (but not the journal) has been going for 25 years, since Doyle was born in Delaware. He moved to Texas at age 5, his mom giving him an Uncle Scrooge comic to keep him occupied during the plane trip. "But that's not what got me started on drawing comics or on art in general," he says. "I wasn't thinking it was something I'd do when I grew up. When I was 5, I didn't realize that growing up was something I'd be doing."

Years later, an issue of DC Comics' Justice League of America sparked his interest in the medium. "It was the final chapter of an ongoing story, and you could tell there was all this history behind it, like a big freaky soap opera. I wanted to know who the characters in the background were, what their stories were about. But it wasn't until later, when I started reading independent comics, that I thought, 'Hey, these guys are doing this on their own. It's no giant company. Jeez, they're publishing out of their bedrooms! This could be me!' Oh boy," he says, deadpan, "my comics epiphany."

These days, Tim Doyle is most often found behind the counter at Funny Papers, devouring the oeuvre of Brian Michael Bendis and trying not to roll his eyes at the hardcore fantasy gamers that visit the shop. Or he's quaffing brews at a Beaver Nelson show. Or he's in his spacious, state-of-the-art studio (read: that cramped efficiency with its damning carpet stain), covering canvas with acrylic-based images of Japanese toys and Italian scooters and good old American action-figures. Or maybe he's just filling pages with inked panels that distill his existence into three black-and-white segments each day.

Why should you care? Read a couple issues of Amazing Adult Fantasy, and see if you can't.

Tim Doyle's work can be seen through Feb. 1 in the exhibit "The Language of the Railroad" at Gallery Lombardi, 910 W. Third, or in issues of Amazing Adult Fantasy, available at Austin Books, 5002 N. Lamar.