Austin Chronicle Arts Editor Robert Faires delivers his list of the Top 10 most memorable productions in the performing arts for 2002. 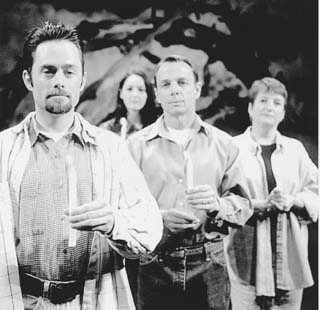 1. The Laramie Project (Zachary Scott Theatre Center): This theatrical mosaic, crafted by New York's Tectonic Theater Company following the savage murder of Matthew Shepard, evokes Our Town, but Zach's production made it truly our town. Director Dave Steakley and a company of exceptional artists delivered this one from the heart, creating a memorable ensemble, not just of the actors, but of the audience. We became the community of Laramie, pondering the prejudice and violence in our midst and the responsibility we bear for it. Involving and triumphant on every level.

2. A Streetcar Named Desire (Austin Lyric Opera): A glimpse inside a not-so-beautiful mind, with the unsettled mental state of Blanche DuBois hauntingly realized in Michael Yeargen's distorted sets, David Nancarrow's sumptuous colored lights, and composer Andre Previn's stark, spiky score. Bold choices by director Brad Dalton made this a gamble for ALO, but their commitment to a new work, daringly staged, paid off with a grand achievement and unforgettable drama.

3. The Well Inside (Sally Jacques Productions): Sally Jacques ended her trilogy of dances on scaffolds with more breathtaking acrobatics and some unexpected intimacy. Here, when her courageous performers dangled high above concrete floors and walked up walls, they described lives of isolation, engulfed by space, yearning for connection. A work rich in beauty, made more lovely by the finale, when all this longing was resolved with two dancers taking hands.

4. My Fair Lady (Austin Musical Theatre): Dressed up by directors Scott Thompson and Richard Byron, this grande dame of musical theatre was more than fair, it was exquisite: extravagantly lavish in look and exuberantly playful in spirit. Youthful vigor and glee drove George McDaniels' Higgins, but he met his match in LuAnn Aronson's Eliza, a spirited child of the gutters whose transformation into a woman of resplendent beauty and charm was wondrous.

5. El Paraiso (Rude Mechanicals): Those wandering Rudes came off the road long enough to compose a rip-roarin', fancy-shootin', hard-kissin' salute to the Lone Star State, Western myth, and the eternal face-off between intellect and desire. With its whiskey showdowns, country karaoke, horse trough bath/battle, and Wittgenstein trailing James Dean, this ode to Texas -- penned by Kirk Lynn, staged by Shawn Sides -- was as imaginative as any Rudes show and more tender than most.

6. The Pavilion (Zachary Scott Theatre Center): Forgive the lapse of critical integrity -- my wife was in the show -- but this meditation on Time's arrow found its target in my heart, piercing it with uncommon sorrow and humor. Credit Craig Wright's script, which spun a small-town high school reunion into a lyrical cosmic event; performances by Robert Newell, Meredith McCall, and Barbara Chisholm that balanced comic precision and wrenching pain; and more deft direction by Dave Steakley.

7. The Medea Stories (Mary Moody Northen Theatre @ St. Edward's University): An ancient drama of a woman who murdered her young took on the immediacy and urgency of a Court TV trial, thanks to the reinvention of Euripedes' tragedy by guest director J. Ed Araiza and a St. Edward's student cast that hurled itself into the telling of this story.

8. The Dinosaur Within (State Theater Company): With epic imagination, compassion, and wisdom, John Walch's script wove together Hollywood and Australian outback, Dreamtime and Dream Factory, to chart how the ache of loss fossilizes inside us, buried under strata of pain and denial. A captivating cast, sensitively directed by Michael Breault, unearthed the playwright's meaning with deep feeling, wit, and grace.

9. Charlie Victor Romeo (Collective Unconscious/UT Performing Arts Center): This superbly detailed re-creation of events leading up to six plane crashes generated almost unbearable tension, but more significantly, it also inspired admiration bordering on awe for the pilots and air crew who never surrendered to despair, even in the face of certain disaster, but always fought to save lives.

10a. Dirty Work (33 Fainting Spells/Dance Umbrella): The return of this Seattle-based dance troupe proved worth the five-year wait, with the company's three women dancing amid -- and sometimes with -- card tables, cans of Tab, projection screens, and school-issue record players in a choreographic investigation of time, its detritus, and the work of performance. Sometimes comic, sometimes melancholy, but always strikingly original.

10b. Celebrity Crush (Refraction Arts Project): "How do I love thee? Let me count the ways." When local artists were allowed to confess their passions for the famous, from Courtney Love to Bobby Sherman, they enumerated them in some of the funniest, most inventive writing on an Austin stage this year, especially Cyndi Williams, Lana Dieterich, Robert Fisher, and Lowell Bartholomee.

Peter Pan (Ballet Austin), for its buoyant choreography, alive with energy and humor, and Christopher Hannon's soaring performance as Pan

Bash (dirigo group), for the intimate insights into dark hearts provided by actors Lee Eddy, Kelsey Kling, B. Michael Rains, and Lowell Bartholomee, and the keen direction by Jud Jones

The Incubus Archives (Rude Mechanicals/Hyde Park Theatre), for the imagination, commitment, and ferocity of the artists who brought it to life

Fugitive Pieces (Salvage Vanguard Theater), for its bold landscape (a theatre filled with gravel) and soundscape (live percussion from hubcaps, glasses, buckets), and its fierce acting

Dinner With Friends and Proof (State Theater Company), for their smartly designed and richly detailed sets, the intelligence and clarity of their direction, and their winning casts

Rigoletto (Austin Lyric Opera), for Michael Raiford's thrilling environmental design in a farewell to the City Coliseum and Joseph McClain's vigorous staging in what ended up being his farewell as director