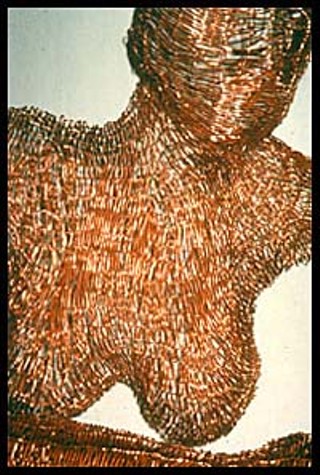 At the Window, woven copper wire, by Patricia Greene

Here's a penny for your thoughts: copper. But in order to get that copper, first it has to be smelted from the ore that contains it, most commonly through a hydrometallurgical exercise in which the ore is leached with sulfuric acid, and the copper is then recovered from the resultant solution by a process -- electrowinning -- similar to electrolytic refining.

Maybe you knew that already. Still, it's quite the complex process, and it's only the beginning. After further manufacturing, the mineral winds up in myriad utilitarian forms, one of which is copper wire. From there it's most often used as a pathway for electrical current. Unless, that is, artist Patricia Greene gets hold of it. What happens next is almost as complicated as the initial refining process, as Greene bends, winds, and weaves the wire into sculptural forms -- often the shape of life-size human figures -- that intrigue and hold the eye the way their symbolic positioning or context holds the mind: tenaciously. Her At the Window is only one of several such works of carefully crafted Greene art at the Butridge Gallery's "Unconfined Weaving" show.

The other half of this two-person exhibit is provided by Oscar Silva, whose abstract and microarchitectural sculpture defines the term "labor intensive." Twigs, handmade paper, and almost infinitely knotted strands of horsehair figure prominently in the man's creations, and the pure visual power of those creations may well figure prominently in your dreams of beauty for years to come.

The pairing of Silva and Greene in a single show is an inspirational triumph by gallery coordinator Megan Weiler, not quite on par with the harnessing of electricity nor the smelting of copper, but certainly elemental and galvanizing in an aesthetic sense.

"Unconfined Weaving" is on view through Dec. 30 at the Dougherty Arts Center, 1110 Barton Springs Rd. For more information, call 397-1468 or visit www.cityofaustin.org/dougherty/butridge.htm.