An Angel for AMT 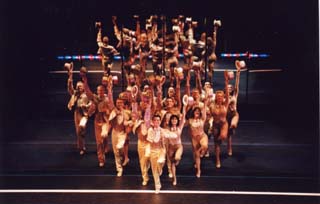 They don't call 'em angels for nothing. When theatre backers provide an infusion of cash for a show at a crucial moment, they can truly save the life of a show or a company. Moments don't get much more crucial than those faced by Austin Musical Theatre in recent weeks when it needed to raise $500,000 or would have to shut its doors. A two-week fundraising campaign generated $100,000, which was enough to inspire the company's board of directors to keep AMT on life support but not sufficient to fund its next show, a January production of Rodgers and Hammerstein's Cinderella.

Enter Charles Duggan, the Austin-based theatrical entrepreneur who has produced the Greater Tuna tours for years, as well as shows for his Marines Memorial Theatre in San Francisco and a handful of plays on Broadway. He is swooping in to AMT to produce a show for them in January -- not Cinderella, alas, but a retrospective of hit musical numbers from Austin Musical Theatre's first 15 productions. The concert-style program, which will run from Jan. 28 to Feb. 2 at the Paramount Theatre, is to feature blasts from AMT's past fully restaged by AMT artistic directors Scott Thompson and Richard Byron, with full orchestra (conducted by AMT perennial Fred Barton, natch), area actors and AMT Academy students, and as many of the original lead performers as can be enticed back for this special event. Thompson says he has preliminary commitments from LuAnn Aronson (My Fair Lady's Eliza and The Music Man's Marian), Armen Dirtadian (Fiddler on the Roof's Tevye), Kevin Earley and Anneliese van der Pol (Oklahoma!'s Curly and Laurie), Lauren Hathaway (The Sound of Music's Maria and Gypsy's Gypsy), Paty Lombard (The Best Little Whorehouse in Texas' Miss Mona and The Sound of Music's Baroness), and Leslie Stevens (Sweet Charity's Charity). Country star Larry Gatlin will reprise a piece of his performance as Professor Harold Hill from The Music Man at a special gala performance which will serve as a fundraiser for Austin Musical Theatre.

According to Thompson, special arrangements with Equity will help AMT minimize the show's expense and maximize its income, so as to help the company get back in step, fiscally speaking. Of course, the retrospective's run is considerably shorter than the three weeks AMT had booked for Cinderella, so producer Duggan has also arranged for A Tuna Christmas, which had been slated to return to the Paramount for one week starting on New Year's Eve, to extend its stay another week, through Jan. 12. Paul Beutel, who directs programming for the theatre, says he believes "this is the best possible solution for all parties involved," providing Tuna with "a much-deserved longer run" while still giving AMT audiences a great musical fix to kick off 2003.

That Duggan will play a key role in giving Austin Musical Theatre a second life is fitting, given his instrumental part in helping the company roar to life six years ago. When AMT opened its first show, Peter Pan, the production was scheduled to run just one week, but strong sales and audience response led the company to consider a holdover. Duggan's financial participation helped make that possible. "I was present and assisted at the birth of AMT," says Duggan. "I am here to help the organization through these growing pains and to guide it to its successful and deserved future."

Plans for the subsequent AMT slot in May, originally scheduled for Guys and Dolls, are still up in the air pending the ongoing fundraising efforts and response to the January production. However, talks have begun regarding a possible substitute, as well as the resuscitation of AMT's performing arts academy. Expect to hear more.

Single tickets for the AMT celebration will go on sale Monday, Dec. 16, at the Paramount Box Office, 713 Congress, and Star Ticket Outlets, and may also be purchased by calling 469-SHOW. Tickets for the gala performance may be reserved by calling 428-9696 x303.