Run by Families, Run for Families

For the artists and audiences of Aztlan, dance is in their blood 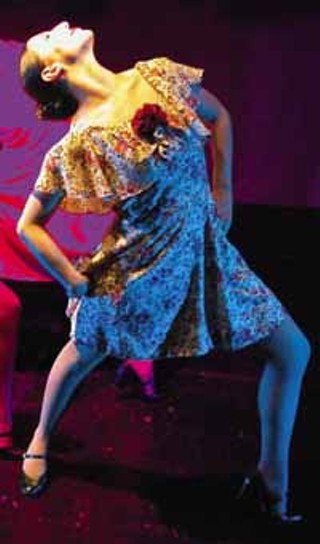 "Eso, eso!" Driana Gonzalez yells from offstage. Sweat flings from the dancers' faces, their chests heave, feet moving so swiftly that they never seem to touch the ground. The scene is raucous, barely contained.

It's a Friday evening, and at the Santa Cruz Center for Culture, rehearsal is just getting started for the Aztlan Dance Company's Reflexiones '02. In the opening number, women in bright orange skirts join men for a leisurely two-step. They pass by each other, slow and pleasant as a Sunday, their shadows building and receding on the white backdrop. But soon the romance is replaced by a different kind of passion. Stomping and clomping and clapping of hands. A fight of some kind, a face-off of footwork, dancers barreling across the stage, their feet tapping out the drama. Bap-bap-bap. Brrrat-tat-tat.

The exhilarating dance "Las Antiguas de Tejas" dramatizes the story of early Mexican immigrants, caught between countries, nearly beaten by the land, forging one unique culture -- Tejano -- from the fragments of others. Like its musical counterpart, Tejano dance fuses native Mexican traditions with conventions of Western European immigrants (especially Germans and Czechs) to make folklorico informed by polka, by Schottis, by redovas.

Each of the four dances that make up the two-hour medley Reflexiones, running through Nov. 10 at the Santa Cruz Center, tells a similar story of historical and artistic assimilation. The World War II-era "Xicano Blues" is the story of Hispanic military men who fought prejudice by fighting for America. "La Pachucada" ("Zoot Suiters") is the story of the flashily attired young Latinos who fought prejudice by fighting against America. But these complex histories are told with broad strokes and conservative values: no cleavage, mostly slapstick violence, soldiers who find more action mopping the floor than on the frontline.

The dance styles mesh "a dash of Mexicana and a splash of Americana," as the program notes say. It's Cha-Cha meets Jitterbug, swing meets mambo, the dance-and-jive of each culture interpreted through Latin hips. This is what Aztlan's artistic director Roën Salinas calls storytelling "the Aztlan way -- a lot of love, a lot of fun." He's not here to shove social justice issues down people's throats. "For some folks," he says, "it's just a reminder that [Latinos] have been participating since then and even before."

The dozen dancers who are sweating their way through Reflexiones are nonprofessionals who come to the studio after work and on weekends over a two-month rehearsal process, trying to perfect an intimidating average of 21 dances apiece. They range in age and size and experience. Fabian Martinez had never even performed in public when he joined Aztlan, although that was 20 shows ago. These days, Martinez takes the stage with a natural ease and flair, a comic readiness. Stephanie Mayorga had been a dancer for 19 years before landing at Aztlan -- it shows in her confident movement, the sass in her step -- but she plans to stay because, as she explains, "We get to explore every realm of dance. A little bit of ballet, jazz, modern, flamenco, and folklorico but, of course, with our 'Aztlan Twist' mixed in."

At one evening rehearsal, Salinas lines the dancers up across the stage and asks them to introduce themselves. "But here's the grooviest part," he whispers to me. "Now I want you to say how long you've been with the company." The answers vary -- one year, five years, seven years -- but every time a dancer has a few years under his belt, Salinas turns to me and smiles. "See?" he is almost saying. "A family."

So it has always been with Aztlan, the city's oldest Latino dance company. Nearly 30 years ago, Roën Salinas' mother, Maria, helped organize the group, taking its name from the mythic Native American homeland stretching across the West Coast. Back then, it was a backyard affair, where neighborhood kids dropped by after school to learn some Mexican folk dancing and stay out of trouble. In the subsequent three decades, Aztlan has grown into one of Austin's most established dance companies, with son Roën choreographing and often performing in the shows, lobbying and lecturing for the organization, sweating and bleeding for the place, while his wife Driana Gonzalez designs the costumes and make-up. Run by families, run for families.

For now, Aztlan has its own humble performance space in the Santa Cruz Center for Culture. But the company's successes -- the shows consistently sell out -- and a recently scored partnership with Footworks Dance mean Aztlan will be able to build a 14,000-square-foot space that will enable them to hold in-demand Latin dance classes and develop new talent for the company. "We're enjoying our zenith right now," Salinas says proudly.

The moment captures Aztlan's juncture between past and future: constructing a new facility in which to continue exploring Latinos' cultural heritage. But Aztlan's work is more than preservation, more than nostalgia; it is a reflection of an ongoing cultural blending in Texas and around the country. Making new words, new music, and yes, new dance. And unlike some boundary-pushing art companies, which might require a Ph.D. or at least a few PBS documentaries to appreciate, Aztlan makes dance that is accessible. "You look at it, and it looks like you can do it," says Salinas. "I think that's one of the reasons why we have such a loyal fan base, because they feel it's well within their grasp to appreciate it, to understand it, to value it, and to an extent, to let their spirit dance with it."

It's a Friday evening at the Santa Cruz Center for Culture, and rehearsal is just about to begin. Two little girls sit on a blanket in the middle of the floor. They might be someone's daughter or someone's sister, but right now, they are just spectators waiting for the dancing to start. They lie on their stomachs, holding pink hairbrushes up to their ears and talking into them as if they were cell phones.

"Hey," the first girl whispers into her hairbrush. "The show's about to begin."

"Yeah, I know," says the other, clicking the heels of her stockinged feet together.

"Listo?" comes the call from backstage, and the lights dim.

The girls click their hairbrushes closed and lean forward for the show.