John Posey's 'Father, Son & Holy Coach': Football on the field and on the stage 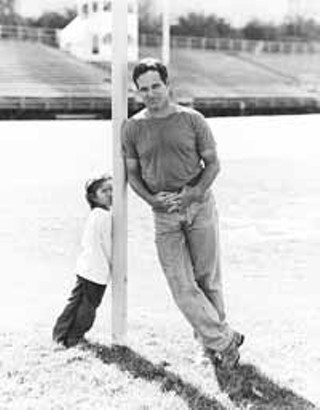 The first time I spoke with writer/actor John Posey, he told me about a Web site called FireRonZook.com. He and I had arranged through e-mail to speak on Saturday, Oct. 12, but I asked him to reschedule because I am a loyal Longhorn, and it was Texas-OU day. He replied that rescheduling was no problem, as traditional football powerhouse Florida was playing that day, too -- and, like UT, lost. Thus his initial comment about FireRonZook.com, Zook being the gentleman who replaced the legendary Steve Spurrier as head coach of the Florida Gators, who aren't doing very well this year.

What, you might legitimately ask, has all of this to do with Posey's upcoming visit to Austin to present Father, Son & Holy Coach, his one-man tour de force? Everything. Back in the early 1980s Posey played football for the Gators. In fact, his brother was an All-American kicker there and later played professionally. Posey earned an advertising degree but always wanted to act, so after graduation he moved to Atlanta and started an improv comedy troupe called Comedia. Some L.A. types spotted him and invited him to audition for sitcoms. Posey did the TV and movie thing for a while, but he had a hankering to be a well-rounded performer, so he went to New York to train. During one of his NYC acting classes, he began to develop Holy Coach.

The story centers around Johnny Sanford, the local Tupelo County, Ga., high school football phenom, and his father, Ed. Ed is totally obsessed with football. For instance, he has an oversized football helmet/chair that reclines in three positions: halfback, quarterback, and fullback. From the time Johnny is very small, Ed has everything revolving around football, including fairy tales: Humpty Dumpty falls off the wall because he's fat and weak and doesn't have any offensive strategy.

"I play 20 different people, women included, the whole town, really, and never leave the stage," says Posey. "Knute Rockne is the holy coach, and I quote him constantly. It's the whole 'football is a metaphor for life' thing. It raises the question of what exactly is failure, and what is success, how we all see these two things differently and how we handle either one."

Posey has toured the play off and on for 10 years, and while it does really well in football towns like Austin, he's found that people relate to it whether football abounds or not. "Many audience members feel I am describing their life story -- fathers, coaches, sons. People have written telling me that they called their fathers after watching the show. It's powerful in that regard."