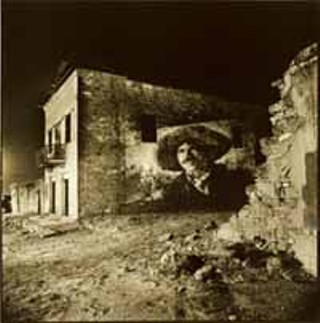 Most afternoons at 411 Brazos, the construction drones on, traffic whirs past, and the Joseph Raj Gallery stays empty. The gallery's Web site, a virtual warehouse of past exhibitions at www.rajgallery.com, gets thousands of hits a day. But the actual space? "About 10 visitors a week," owner Joe Arredondo says. "This show has been very popular."

The show is "Roma, Texas," Joel Salcido's stirring photographs of a once-thriving border town, now quietly crumbling. Commissioned by Texas Highways magazine, the 18-part series of sepia-toned black-and-whites finds dignity in the town's modest ranching community and suggests the shadow still cast by the city's brief brush with Hollywood in 1952, when Elia Kazan used it to shoot Viva Zapata!, which Roma celebrates with an annual film fest. Solemn images of a reverend, of a man visiting his ancestor's cemetery, of a Stations of the Cross re-enactment, all suggest the strong spiritual current of the community. Even everyday images -- a wandering horse, a tattered shoe -- are cast in a mysterious light.

"Joel Salcido is someone who will be known regionally if not nationally," says Arredondo, a loquacious and articulate appreciator of fine art photography. "He's a fabulous shooter and a fabulous printer." Salcido is the kind of up-and-coming talent Arredondo likes to showcase, an artist who says something even if he doesn't necessarily sell something. But the gallery is struggling and might fold soon, a decision Arredondo will make after the "Roma" show closes. "This is my very expensive hobby," Arredondo keeps saying, although his passion and breadth of knowledge belie that characterization. It is, however, a very tough time to sell art. And, as Arredondo points out, "It's not like people are going browsing on Brazos." Well, not yet.

The Joseph Raj Gallery isn't the only gallery hidden inside that nondescript 411 Brazos complex. On Nov. 2, Kathy Womack will open the Kathy Womack Gallery, displaying her tasteful "Women and Wine" series of canvases (www.womenandwine.org). And next door to that, at Studio 107, Liz Joblin has turned her downtown loft into a contemporary art funhouse. Through Oct. 31 you can see "The Game Show Exhibit," a funny and fantastical collection that is part envelope-pushing visuals and part Milton Bradley homage. Remember "You sank my battleship"? Gallery Lombardi owner Rachel Koper riffs on that fateful game-over catchphrase with Battleship With Ground Effects, a four-piece series culminating in the vessel's mushroom-cloud explosion, ringed by Lite Brights. Faith Gay's Bonus Points is a kaleidoscopic splat of color, 200 pieces of fused plastic dribbling across an entire wall. Joblin, who opened Studio 107 after moving from Houston three years ago, has assembled an exhibit nicely varied in its interpretations and its contributors, from Austin veteran Heyd Fontenot with his lovable Eileen as a Puppet ink drawings to New York artist Andrea Legge's cheeky digital print titled Squares Veterans Paul Lynde & Vincent Price Graciously Endure Hollywood Squares' '80s Heavy-Metal Superstar' Episode. Like most contemporary art dealers, Joblin feels the crunch of the economy, but her openings keep growing, along with her hopes for the space. Like Arredondo, Joblin showcases compelling work by provocative artists, all inside that corner complex at 411 Brazos. You'd never know it. Unless you stopped by and looked.