The humor of Lowell Bartholomee gets an airing in 'Blah, Blah, Blah' 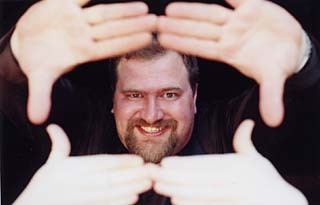 Lowell Bartholomee ... yeah, the name's a bit of a mouthful -- and the man himself has more than a mouthful to say. He has to be prodded, though, because the big guy's kind of reserved and self-effacing in person, not the sort who seems comfortable taking over a conversation with The World According to Me.

Even after prodding, his opinions aren't always expressed as strongly -- or as eloquently -- as they are in his scripts for the stage. It's in his writing that Bartholomee's takes on pop culture -- on the Hollywood machine, visits from beyond the dead, the fault lines underlying so many human relationships -- it's there that the man's judgment blazes like a klieg instrument throwing some gritty metrosphere of modern life into stark relief.

"I want to make the audience laugh," says Bartholomee, who often does. "Contrary to what Woody Allen says, I think that one of the greatest things you can do is to make a big roomful of people laugh in some way. Because there's so much to be depressed about in life, you know? And I'm not saying that you don't need to do that, because some day I'd like to depress a bunch of people, too, I'd like to examine things a little more deeply. But I don't think something's really successful unless it has some humor in it -- even Pinter's deepest, darkest plays are funny. And most of the stuff in Blah, Blah, Blah [an anthology of Bartholomee's short plays that opens this week at the Blue Theater] is twisted in a comedic way, because my goal with this show is to make 'em laugh or, maybe, piss them off in some way."

Nothing like an opinion to accomplish the latter; and little like an opinion, as wielded by this funny-bone savant, to accomplish the laugh-making. "My characters in general are extremely opinionated," says Bartholomee. "Because I'm extremely opinionated. My sister used to hate me for that, because I have an opinion about everything. My little brother and I, when we were in highchairs, before we could talk, we'd have these arguments with our dad. My dad's a lawyer -- but he's an ethical lawyer, so we never had a lot of money -- but he'd start these nonsense arguments with us at the table, just making argumentative noise -- 'Arrr rawr rawr!' - and we'd answer back with the same kind of thing. And my mom would watch this, and she'd be like, 'You know, that's gonna come back to bite you in the ass.' And she was right: It kind of has."

Bartholomee, all grown up and making the more complex argumentative noises of creative adults, isn't pulling off this latest production by his own opinionated self; but then, neither is he only the writer on the project. For the Blah, Blah, Blah anthology, co-produced by Refraction Arts and Bayou Radio, Bartholomee will also be directing an eclectic mix of actors at the Blue Theater (next to the bustling Blue Genie Art Industries complex behind the Salvation Army on Springdale). He's used to such things -- he's a producer/director at Austin's ADV, purveyors of popular anime translations -- which is why it's no big surprise that much of Blah, Blah, Blah concerns the entertainment industry.

"A Hill of Beans," about what Casablanca and especially Bogart's Rick Blaine mean, as seen from male and female perspectives; "One Small Step," which suggests what might've really happened inside the first lunar module (Neil Armstrong: "Holy shit, we're on the fucking moon!"); even "The Courtney Love Letter," in which a fan unleashes his conflicted love/hate response to the life and work of the Widow Cobain; all these hilarious, insightful pieces and their companion shorts point toward a life of media immersion.

"It's such a large part of my daily life," says Bartholomee, stroking his goateed chin. "It's my job, yeah, and then I come home and I'm either on the Internet, watching a movie, seeing what's on HBO, reading reviews, seeing what's coming out ... all that stuff. Especially movies. There's almost nothing I'd rather do than watch movies. I've always loved them, and as I got older and read about the industry, after I went to film school and learned more of what was out there, I realized that there was a basic feeling that didn't change. Like on some level I'm still very gooey and kidlike about movies. Because you can be all educated and discuss movies intellectually, you can break them down and talk about the technical aspects and what they really mean, but at the end of the day, it's still, 'Whooo-hoo-hoo! It's movies!'" He blushes suddenly, aware of heads turning our way in the restaurant downtown, but plows on. "I can still watch something that's just things exploding and a bunch of car chases, and I love it.

"But," he adds, frowning, "at the same time, you realize that this thing you're nuts about is backed by an industry that's one of the most hideously run, most monstrous businesses in the world when it comes to people screwing each other over. The nuclear warhead manufacturing industry is more ethical than the film industry. So when you learn about how things get done in Hollywood, anytime you see a halfway good movie, it's like a little miracle. And anytime you see a really good movie, it's so against the odds that they should canonize the director because, hey, how did this happen?"

Just one man's opinion, perhaps, but one funny, media-savvy man's opinion, for sure. And disseminated, in Blah, Blah, Blah, through the voices of many different characters in several different situations, with only one thing in common: the ability to crack an audience up.

You think comedy has to be stupid to be funny? You think live performance has to be dull to be theatre? Be careful about mouthing off and voicing those opinions; after this show, they may just come back to bite you in the ass.