Invasion of the Kiddie-Lit Plays 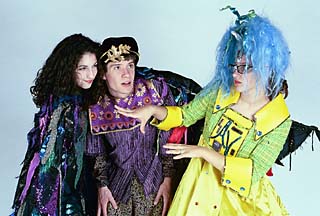 Lions and tigers and bears.

And giants and pirates and wolves.

And witches and jabberwocks and calico cats and white rabbits and red queens and a great white whale.

Heading into the forest of Oz, Dorothy Gale and her companions on the yellow brick road had only the first three to look out for, but anyone venturing into Central Texas' thicket of theatre this month will want to keep their eyes peeled for those formidable creatures and many more -- a whole host of beasts and brutes and enchanted figures that have leaped to our stages straight from the pages of children's literature. July features a full-scale invasion of kiddie-lit adaptations, from The Wizard of Oz and Cinderella to Alice in Wonderland and The Owl and the Pussycat to Treasure Island and -- while it might be a bit of a stretch to call it a children's book, it is a tale most of us are first exposed to in our youth -- Moby Dick.

Not all the stories are as you may remember them: KidsActing has rebooted Cinderella into the computer age as Cyberella, and Teatro Humanidad is sending a latina over the rainbow to meet the wizard of Aztlan, not Oz. And at least one aims to tell us what happened after the stories we know ended (Stephen Sondheim and James Lapine's fairy tale musical Into the Woods). But all the productions seek to draw on the wonder that made those stories so fascinating to us as children and to utilize the unique tools of the theatre to provide wonder anew, no matter what our age.

In addition, many of the shows draw not only on the stories from our youths but on the youths themselves to act out the stories. Moby Dick, Cyberella, The Wizard of Aztlan, and the Camp Paramount version of Treasure Island will all be performed with actors in their teens or younger. And nothing infuses a story with more wonder than to see kids discovering the ability to create a story on a stage. It's a good month to venture "into the woods."

Cyberella KidsActing revives its musical spin on Cinderella, in which the downtrodden heroine meets her Prince in an Internet chat room and seeks true love despite interference from her stepmother and stepsisters, a sleazy Hollywood producer, and evil Elle Virus. With songs by Tish Hinojosa, the Austin Lounge Lizards, Robert "Beto" Skiles, and others. Dede Clark directs. July 5-14, Thursday through Saturday, 7pm, Sunday, 2pm, at Reagan High School Performing Arts Center. Call 458-KIDS for information.

The Wizard of Aztlan Teatro Humanidad takes L. Frank Baum's The Wizard of Oz down the red road in this version by ChUSMA, a Chicano comedy group from L.A., which has Concencia and her friends Tin Tin, Animo, and Lencho seeking Quetzalcoatl in Aztlan, the lands of the north. July 5 & 6, Friday and Saturday, 7pm, July 7, Sunday, 2pm, at the McCallum Fine Arts Theatre, 5600 Sunshine. Call 389-0892.

Edward, the Owl, and the Calico Cat The Pollyanna Theatre Company makes its debut with playwright Emily Cicchini's adaptation of nonsense stories and poems by Edward Lear. The play follows Edward, a boy who loves to make up new words and new worlds, on a search for his pet cat, who has run away with an owl. Judy Matetzschk (Project InterAct) directs. Through July 14, Dougherty Arts Center, 1100 Barton Springs Rd. Call 743-7966.

Treasure Island Austin Theatre Alliance hosts Camp Paramount 2002, a tuition-free day camp in which young people spend a week creating a full theatrical production. Artists with the Missoula Children's Theatre lead the daytime rehearsals. Fifty to 60 participants will be selected by auditions, which are open to the first 500 children who pre-register. Camp begins July 29 and concludes with performances on Saturday, August 3, 3pm and 7pm, at the Paramount Theatre, 713 Congress. Call 472-5470.