Chicken and Beans: It's What's for Dance

The early cultural studies scholar Raymond Williams once wrote, "Culture is ordinary: that is the first fact." Our own daily sensual, intellectual, and spiritual environment is so fully wrapped around us that it's usually invisible to our own eyes. The problem is, this normalization makes the other cultures with which we come into contact seem all the more foreign by comparison. Chicken and Beans, a dance/variety show created and performed by Heloise Gold and Leticia Rodriguez, seeks to bridge this gap by giving the viewer vibrant multi-sensory glimpses into the performers' Jewish and Hispanic heritages, respectively. Although some of the evening's pieces fall short, moments in Chicken and Beans feel like authentic invitations into the cultural environments which have helped mold these two women into the talented performers they are.

The evening consists of dance pieces which run the gamut from the quiet and meditative to the humorous and celebratory, interspersed with skits, music, and recorded voices of the performers' older Hispanic and Jewish relatives. The relatives talk about everything from pinochle games in the "old neighborhood" to the nonexistence of "pure" races: as one Hispanic relative says, "Nobody really knows what runs through people's blood." In tandem with the recorded interviews, the dance pieces seem to do the best job of transmitting the performers' cultural experiences. Several begin with exaggerated, vaguely familiar, culturally associated gestures (the stereotypical Jewish chopping-the-air-while-bending-at-the-hip-for-emphasis gesture, for example) which then expand into broad spectra of complex movement. I found this visually fascinating, and reminiscent of the phenomenon of meeting someone, assigning him/her immediately to a personally held stereotype based on appearance, manner, etc., and then watching the person unfold over time into a multifaceted, surprising tapestry of a human being as you get to know him/her well.

There were weaker moments, mostly occurring in the non-dance skits sprinkled throughout the evening, such as the confusing, saccharine scene early on having to do with a Lamb Chop-esque hand puppet comes to mind. But there were also wonderful surprises, as when Leticia Rodriguez descended the stage after one dance piece, donned an embroidered Mexican shawl, and broke into the ballad "Aquellos Ojos Verdes" in a gorgeous, husky alto. Wow. Or when both performers simply sat next to each other onstage, and we all listened together to the recorded laughter of their combined relatives. This, mis amigos, buhbies, my friends, is the stuff that builds bridges. 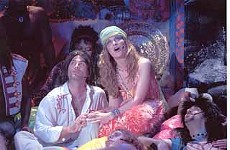 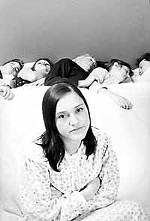