You're a Good Man, Charlie Brown 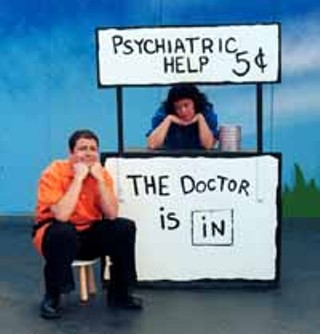 As drawings go, it could hardly be simpler: a plain-vanilla circle for a head, two dots for eyes, a "u" resting on its side for a nose, a dash for a mouth, a curved line bending into a couple of loop-de-loops for hair. And yet, as anyone who's tried it can tell you, drawing Charlie Brown so that he looks just like he does in the Peanuts comic strip is harder than it looks. Something in Charles Schulz's pen imbued those lines and squiggles with a personality, a character, a soul, that isn't easily duplicated.

The same principle applies to portraying Charlie Brown and the Peanuts gang onstage. As characters, they seem so simple: just kids spouting adult words and attitudes, broad comic types. And yet, getting them to feel just like the characters in the funny papers is trickier than you might think. Schulz's pen also imbued those two-dimensional children with complicated psyches, delicately balancing the sensibilities of child and adult, filtering sophisticated philosophical questions, moral quandaries, and emotional conditions through the context of school yards, Little League games, and pets, grownup life viewed through a lens of innocence. It tempered the predictability of their comic-strip world and left room for vulnerability and dimension, creating cartoon kids both wise and neurotic beyond their years. Playing that is tough for any actor, although the younger one is, the more one matches the Peanuts kids in stature and comes by their naïveté naturally. Adults are forced to affect the youth and guilelessness they've outgrown, as well as compensate for being three-dimensional.

So when Ronnie W. Karam shlumps onto the Zilker Hillside stage in that familiar yellow shirt with the black zigzags and gazes out at us with eyes that have seen scores of kites devoured by trees, hundreds of scoreless innings at the sandlot diamond, and thousands of lonely lunchtimes, it feels like a real achievement. There's the affable fatalism we know so well from the comics, the kid knowing he doesn't fit in yet still trying so hard to, resigned to failure yet making an effort anyway. Karam has this hangdog look, shaded with a sort of perpetual perplexity, so deeply etched on his face that he appears as if he has one of Schulz's thick worry lines creasing his brow. He infuses the Silver Star Theater Group production of You're a Good Man, Charlie Brown with the graphic simplicity and boldness of personality -- the cartoon essence -- of the source material.

Likewise with Larissa Wolcott and Chuck's little sister, Sally. The actor's helium voice and crinkled-up face, channeling the unyielding obstinacy of a kindergartner, boast the thick outline and broad humor of the comic strip. When Wolcott plants her feet and turns her cocksure eyes our way, we see the comic-strip Sally's certainty that the world owes her all the praise, wealth, and other niceties she desires. She's enormously fun to watch.

All the performers in the five-person cast are appealing, and in serving up Clark M. Gesner's music and words -- many of them drawn from Schulz's original comic strips -- they radiate the joy of kids at play. Moreover, they are a sweet-voiced crew, spinning Gesner's light and amiable odes to suppertime and security blankets and Beethoven into musical cotton candy. If they don't all manage the considerable trick of embodying the Peanuts characters completely, they're still engaging.

Of course, on opening night, the company seemed to have absorbed some of the haplessness of Charlie Brown's baseball team. Doors stuck, a mic shorted out, set pieces had to be wrestled on and off, and more than one dance number found a cast member or two glancing nervously at their feet. No doubt some of this will smooth out during the course of the run, though Scott Schroeder's set design relies so heavily on the actors to move cumbersome set pieces that some scene changes may continue to rob the show of its momentum.

But we like Charlie Brown's team in spite of their failings and foibles, and so it is here. We can see that these Silver Star performers, like the cartoon kids they play, are a good-hearted bunch, energetic and likable, and that, at the end of the day, they know real happiness. And in their tribute to Charles Schulz's enduring characters, they share a little of it with us under the stars in Zilker Park.