Blur: We All Have Something

When I was 16, a friend was diagnosed with a chronic and incurable (though treatable) illness. Understandably, she was angry and sad, but also, being 16, she milked it for all it was worth. Finally, exasperated, I tried to jolt her out of her self-pity, saying, "Look. We all have something." Every one of us has some sort of damage, visible or not -- it's what we do with it that matters.

This idea is echoed in playwright Melanie Marnich's Blur, as produced by Hyde Park Theatre. The play begins with an ominous diagnosis delivered to Dot DePrima, 17: She has a degenerative eye disease that may make her go swiftly, irreparably, and completely blind. The rest of the play deals with the fallout of this pronouncement: its effect on Dot's relationships, her sense of self-identity, and especially her journey into young womanhood. There are some thoughtful questions posed here about the nature of disability: At what point does a limitation become a handicap? How does a disability mold one's identity? And, perhaps most importantly, how does one transform what may seem like a handicap into something resembling strength? There are, of course, no clear-cut answers; strengths, limitations, and disabilities, when placed next to each other, do tend to "blur" into an imprecise continuum. Marnich draws such a continuum by using the flaws and fissures of her characters to illustrate that human damage can be beautiful -- or at least useful.

Director Ken Webster has assembled a near-perfect cast for this production, and seems to have had in mind the importance of balancing each actor's energy and talent to create a well-rounded whole. The performers melt seamlessly into the endearing and painfully human roles that Marnich has crafted. Lee Eddy is heartbreakingly vulnerable as the true-blue punk orphan Francis Butane; Katherine Catmull, Dot's clingy, over-devoted mother, melts down beautifully as she tries -- and fails -- to insulate Dot (at one point, literally) from what seems to her to be an untrustworthy world. David Jones is particularly likable as Father O. O'Hara, a troubled priest with a knack for inverting confessions in order to become the recipient of absolution. Joey Hood and Corey Gagne are warm and engaging as Dot's devoted boyfriend and sympathetic eye doctor, respectively. But the play belongs to Dot, played with subtlety and sweet charm by an utterly unpretentious Monika Bustamante. There are moments when she simply stares in front of her through her failing eyes, and we are pulled into her tragedy and tumult without a word.

Structurally, this piece could have proven challenging. Blur is made up of short, choppy scenes, most of which contain bright nuggets of insight that come and go quickly. Conflicts in the play arrive much as they do in life: seemingly out of nowhere, and with great rapidity. Webster, however, navigates this rocky terrain confidently, shifting easily from quick scene to quick scene, allowing the pace to speed and slow like river rapids. As with the characters' disabilities, these technical challenges end up adding to the strength of the piece. From the initial scenes of Dot's innocent child-life, through her jarring tragedy, through her awkward search for maturity, to the eventual resolution of her loss, the audience is drawn along in a briskly paced, dynamic ride. This ease of action is augmented by a versatile, well-integrated set designed by Leilah Stewart, who has enabled Hyde Park's small stage to depict multiple distinct settings without confusion and fuss. I left Blur impressed with how both the characters of this play and the artists of this production were able to mine the challenges that faced them and, like theatrical alchemists, come up with some serious gold. 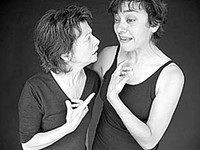