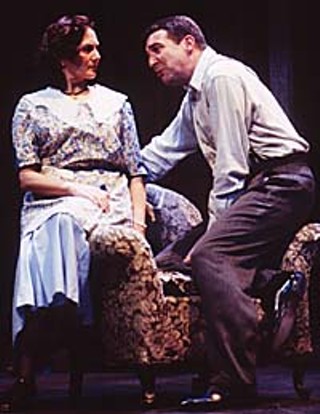 The Glass Menagerie: Ignoring the Obvious

The word "classic" has, in recent years, become overused, and not many 20th-century American plays deserve the title, but if any does, it is this Tennessee Williams play. In its time, The Glass Menagerie was groundbreaking for its narrative style, but even more for establishing a character that has become classic as well: the Fading Southern Belle. Amanda Wingfield is such a woman, raised in security and comfort, now trapped in a world not made for the unmarried female, getting by on charm that is fading like the ancient photograph that dominates her tiny apartment, of her long-gone, boozing husband.

Ostensibly, the play is the memory of Tom, Amanda's son, the poet-dreamer, who works in a shoe warehouse by day so that he can support his mother and his shut-in sister, Laura, who walks with a limp as the result of a childhood disease. At night, Tom dreams of revolution and adventure, particularly of the seafaring kind, and his smothering mother is willing to let him shed his responsibilities if, before he leaves, he finds a husband for Laura -- which leads to the famous scene with the "gentleman caller" and a most enduring final image.

I love this play. If a more moving, touching play exists in the American canon, I am unfamiliar with it. The characters are so beautifully and succinctly drawn, so true to life, so recognizable, and not just through long familiarity, but also in an ultimately human way, it would be supremely difficult not to relate to them on an elemental level.

Given the above, this State Theater Company Equity production is puzzling. It's almost as if most of the people involved ignored what is most obvious in the play. Most of the characters appear to be caricatures. David Stahl is as fine as any actor in the area, but from the first his Tom is a rebellious, unreasonable punk, initially speaking in a nasal, pinched voice that obscures the poetry of the language. Lara Toner plays Laura with strange twitches, dragging her leg, seemingly mentally defective, a whipped dog who never bites back. Guy Roberts' Gentleman Caller is an eager pup, every inch the gentleman, bouncing off the walls with unfettered, boy-like enthusiasm. In opposition to these is Karen Jones' Amanda. But rather than the whacko Southern Belle whose stories of the past sound like one-quarter truth, three-quarters delusion, she appears as a sensible, down-to-earth mother who only wants what's best for her children. It simply didn't make sense. If there is a broadly drawn character in the play, Amanda is it, but Jones seems purposely to avoid Amanda's more extreme aspects until, in the second act, she dons a huge yellow dress that makes her look like a sunshiny flower, quite effectively playing the Southern lady thing to the hilt.

Only rarely, however, did the actors seem to connect, with the story or with each other. I don't know what director Michelle Polgar was thinking, but for me, Tom is not a punk, Laura is not mentally -- or physically, for that matter -- handicapped, Amanda is not a fine and good mother, and the Gentleman Caller definitely is not the nicest guy on the block. And while Christopher McCollum's set design is a thing of scarred industrial beauty, floating gracefully on the stage like a huge, disembodied ship, he has allowed what is probably the most well-known prop in American theatre, the menagerie, to be pushed far over to the right side of the stage, practically behind a chair. Of all the strange choices made, this seems to me the strangest, and the most sad.