A Land Shaded in Melancholy Hues 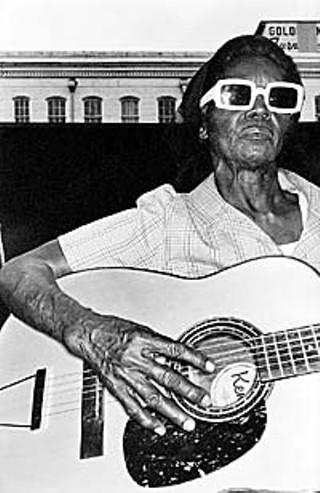 AMOA's exhibition reveals how the South, like the blues, is full of contradictions: dark and woeful yet beauteous and jubilant.

Etta James is wailing. From a scratchy vinyl 45 comes her voice, anguished and rough, describing how it felt to watch her one and only walk down the aisle with another woman. "I was losing the man that I loved," she sings mournfully, "and all I could do is cry."

Near the jukebox playing James' lament hangs a photograph of a young woman lying on the hood of a car in a parking lot somewhere in the American South. All her weight is sunk against the windshield, her hands rest listlessly on her stomach. Her head is turned in the camera's direction, but her gaze is elsewhere, on something else in the parking lot, or perhaps something more distant, in space or time. Her face, half of it in shadow, has a faraway look to it, a numbness of expression that suggests great loss. The image seems of a piece with Etta James' mournful song, the one informing the other, kindred in spirit if not in fact. Whether or not the girl in Mark Steinmetz's 1996 photograph Athens, Georgia actually lost a lover, too, she embodies "the blues" in a way that meshes sweetly with the vocal manifestation by James.

The opportunity it offers to connect the blues aurally and visually goes a long way to recommend the Austin Museum of Art's "Visualizing the Blues: Images of the American South, 1862-1999" to fans of music or anyone disinclined to venture inside a museum. It transforms that traditionally hushed, contemplative, visually focused experience into something less formal and more engaging, in terms of the human senses it involves and the associations it leads us to make with the show's subject through folk and pop culture, and the expression of emotion as well as its depiction. We don't just draw on what we think when we see a delta shack but what we feel when we hear B.B. King sing. It brings us to the crossroads where our lives meet song, singer, and the feelings they describe.

Making the experience even more appealing is the fact that visitors can program the music themselves. Inside the galleries sits a gleaming 1954 Seeburg jukebox, stocked with singles by an assortment of blues and R&B legends: B.B. King, Howlin' Wolf, Memphis Slim, Otis Rush, Aretha Franklin, Bobby "Blue" Bland. Visitors are free to punch up any selection, at no charge, and their choice is piped throughout the space. As you punch those stiff buttons, watch the machine smoothly pull out a record (the one you chose!) and flip it onto the turntable, and listen to that uniquely sweet sound of needle hitting vinyl, you're setting your own soundtrack for the visit. In fact, since the music you choose is heard by everyone present, you're becoming a co-curator of the exhibit -- if only for 2 minutes and 45 seconds.

But "Visualizing the Blues" is more than a chance to spin some choice platters. It has something to say about a region of this country with a rich culture and a scarred past, a region built on the backs of slaves, whose masters chose to break from the Union rather than forfeit their right to own other human beings. More than a century after slavery's abolishment, the repercussions of that history -- and of the Confederacy's defeat -- still resound through the region, coloring life there, shading the South in blues, melancholy hues that describe the racial divide between blacks and whites, the bitterness over what one lost and what the other never had, the widespread poverty, economic and spiritual. And yet, the South is also home to great beauty and jubilation. It, like the blues, is full of contradictions: darkness and woe that gives birth to something sweet and uplifting. The photos here speak to the region's opposing natures.

In the South, as in the blues, people strive to make something out of nothing. In Jack Delano's photo Convicts in the County Jail, Greene County, Georgia, 1941, two black inmates who probably have precious little to their names and even less to live for are nonetheless managing to scrape together a little pleasure, one by playing guitar, one by dancing. Turk's Place, Leflore County, 1985, shows a roadhouse at twilight, a modest building of whitewashed wood shot from a distance in a way that highlights the bar's isolation, allowing the rural landscape to surround and dwarf it. The absence of cars makes the place seem still more remote, even lonesome. And yet, a string of colored lights adds a note of insistent cheer, a signal that even on this nowhere road life will go on with as much joy as it can muster.

Some images resonate from a particular time, such as Earnest J. Bellocq's portrait of the New Orleans woman contemplating a shot glass of rye in her hand; her hairstyle and striped stockings ground her in the first decades of the 20th century. But more photos -- a startling number -- seem to belong to no fixed era; they look as if they could have been taken any year in the past 80. We see the same dirt roads, the same endless cotton fields, the same luminous sky and torn screen doors and barefoot children and stained undershirts and peeling paint, the same careworn faces. Without the cards dating them, could we tell that the black woman tending a field in Danny Lyon's Tallahatchie County, Mississippi, 1964 came more than 20 years after the one in Marion Post Wolcott's Resting From Hoeing Cotton on the Allen Plantation, an FSA Cooperative, Nachitoches, Louisiana, 1940? The tools, the clothes, the landscape, are so similar. It might be heartening to see such continuity between generations were it not for the poverty depicted and what we know of the painful history of black Americans in this region.

Not surprisingly, many of the photographs in "Visualizing the Blues" lay open that history with striking simplicity. In Arthur Rothstein's Unemployed Youth, Birmingham, Alabama, 1940, a young African-American stands outside a movie house, a poster to his right advertising that week's feature, Ninotchka. The contrast of that frothy comedy about Greta Garbo's stiff-necked Communist finding love in the arms of a tuxedoed American playboy and this figure without a job and possibly a future might read as a statement on Depression culture were it not for the sign to the man's left, "Colored Balcony Open Saturday, Sunday," rendered in cheery script. Shadows from the theatre's fire escape add to the message: It's a white man's world; the black man is just his prisoner in it.

Margaret Bourke-White's Hood's Chapel, Georgia delivers that message even more literally. Depicting a black man on a chain gang, the details bring home the weight of the prisoner's limited world: the uniform covered with dirt, the worn boots, the oppressive iron cuff around his boot, and, sticking out of it, the fork he eats with. Making the image more disturbing is the resemblance in the stripes on his uniform to the bars on the American flag. The suggestion of Old Glory, linked to a picture of a black man in chains, reminds us how hollow that hallowed phrase "liberty and justice for all" rings where the lives of black Americans are concerned.

The image that communicates this most succinctly is Henri Cartier-Bresson's Mississippi, 1961. Taken outside a scruffy roadside store, maybe a gas station or grocery, it shows on one side of the frame a small bench, no more than three feet long, on which two black men sit hip to hip. On the other side is a church pew, long enough to accommodate three or more people, occupied by a single person, a white man. That simple shot gets to the heart of so much of Southern life: two races, separate and unequal, one with the lion's share of the resources -- more than he can ever use himself -- and the other left to make do with whatever he can.

For the most part, the show allows the photographs to tell the South's story sans comment, and rightly so. To see Post Wolcott's Negroes Jitterbugging in a Juke Joint, Clarksdale, Mississippi, 1939, and Jonathan Postal's Wedding Day, New Orleans, hanging side by side is to see a classic contrast of Southern life that speaks for itself: blacks against whites, the underclass against the privileged.

But when the curators feel the need to elaborate on the exhibition, as with Eudora Welty's portraits of two men with watermelons, a black farmer and a white grocer, they load their commentary with critical jargon and the rarefied language of the academic. It is text completely at odds with the straightforward character and simplicity of the images and gives the impression of the curators as specialists seeking to claim the photographs for themselves, for the realm of art over which they hold dominion.

Certainly, artistic craftsmanship is evident in most of these photos, and many of them draw power from aesthetic qualities: composition, the play of shapes within the frame, of shadow and light. Still, you can't ignore the history involved in these photographs. You can't filter out the past they document, the history of profound injustice perpetuated by one race on another. Danny Lyons' The Movement, 1964, depicting a white cop who has a black protester in a chokehold, is a case in point. Well-crafted the image may be, but its significance lies in what it shows us: This is where we come from -- whites controlling blacks, subduing them with violence. Saying that we've had civil rights legislation in place for 35 years doesn't clean the slate of centuries of slavery, discrimination, intimidation, dehumanization, and bodily harm.

It's a lesson that the Austin Arts Commission faced recently, over the selection of white artists to create public artwork for the Carver Museum and Library. Blacks in the community protested the decision, and the commission started the process for commissioning the Carver art over. It may seem unfair to the white artists who applied for the commission in good faith and sought to honor the African-American community with their work, but the degree of unfairness they see here is completely out of scale to that experienced by the African-American community over the last 500 years. History trumps art.

And so it does in "Visualizing the Blues." The aesthetic values in the images on view here are considerable, but finally they give way to the world chronicled in them, to the lives marked by deprivation, alienation, pain, and in the face of all that, celebration. More than the blues, it's about the world that gave us the blues.

In conjunction with the exhibition, Larry Monroe, the award-winning host of Blue Monday on KUT 90.5 FM, will speak on "The Blues Today and Tomorrow" Thursday, March 14, 7pm, at AMOA.