How Playfest's Bernadette Nason Got Hooked on Theatre

As Playfest begins its 10th season this week, the Chronicle turned to actor-storyteller Bernadette Nason, one of the longtime regular contributors to the festival, to see what part theatre played in her childhood and how it influenced her current work. 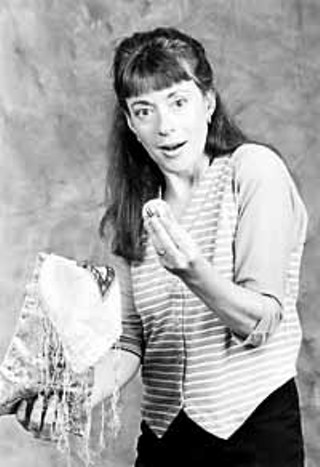 For a decade now, Playfest has been offering young people tales of magic in exotic lands and domestic dramas on the streets where they live, fairy tales and vaudeville and puppetry, in short, the wonder that is theatre. One of the longtime regular contributors to the festival is Bernadette Nason, a talented Brit with a voice of warmth and charm (heard frequently on KUT's Soundsight before its recent passing), storyteller's eyes, and a knack for creating compelling characters (in theatre for adults as well -- her troubled wife in Faith Healer at this year's FronteraFest was gripping). As Playfest begins its 10th season this week, the Chronicle turned to Nason to see what part theatre played in her childhood and how it influenced her work.

"My mother wasn't an avid theatregoer, preferring the movies, but she did take me to several children's productions at King Alfred's College, our local university. My clearest memory is of being sent forward to the front where I could participate. And boy, did I participate! I remember kneeling with the other kids and becoming a snake, writhing my 8-year-old body and weaving my prayer-pose hands in the air above my head. I was in heaven, and continued to be the snake for some time after the story had moved on.

"We used to go to the pantomime at the Winchester Theatre Royal every Christmas -- fun, very camp shows made of classics like Aladdin and Cinderella. The male lead (the principal boy) is always a girl dressed up and a mother or mother-in-law character (the dame) who is always a man in drag. They were hilarious and usually starred one or two quite famous people. I wanted to be in the show so much, it was all I could do not to fall from the mezzanine directly on to the stage!

"My mother loved to read us bedtime stories. When we were little, my brother (Dominic), my sister (Verity), and I all shared one room with beds about a foot apart. Mum would sit on my bed (in the middle) and read C.S. Lewis' The Lion, the Witch and the Wardrobe (which we loved) and Thackeray's The Rose and the Ring (which we hated) or a fairy tale of our choice, till we fell asleep. The next day, Verity and I would 'perform' the stories, often with elaborate costumes made from jumble sale clothes or things from Mum's wardrobe. There were blue velvet curtains in the front room with enough space behind them in the bay window for us to perform. My mother and various neighbors would watch patiently as we relived as much as we could remember (and made up everything that we couldn't).

"My main interest in children's theatre as a performance medium for myself began when I saw (as an adult) Erik the Viking at the Theatre Royal in Winchester. I was captivated and got myself invited onstage to participate (better than falling from the mezzanine -- same theatre!). I was so excited, I practically had to be dragged off the stage and led back to my seat when the participation was over. Every time I see children's theatrical productions, I measure them against that particular show."

Bernadette Nason presents Tales From the Orient at Playfest, February 12-16. Playfest 2002 starts this week with The Case of Goldilocks and the Three Bears and continues with a different show each week through March 23. Performances are Tuesday-Friday, 10am, Saturday, 2 & 4pm, at the Dougherty Arts Center, 1110 Barton Springs Rd. For details, call 454-TIXS.