Music to Chortle By 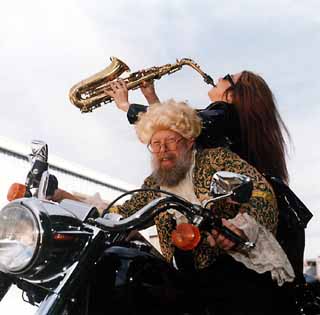 The two pianists are soberly making their way through Brahms' "Variations on a Theme by Paganini," and as they pound their way up and down the keyboard, creating the kind of somber, thundering sounds that lead people to call works by classical composers "serious music," a new tune wriggles its way out of their instruments, a tune that is awfully familiar ... could it be? Yes, by gum it is, that's "Autumn Leaves" cascading in and out of that rumbling Brahms. The unexpectedness of this modern pop tune surfacing in the midst of a classical piano piece and the incongruity of the two cheek by jowl, not to mention the way they inexplicably fit perfectly together, tickle the ear. And as the pianists soldier on, there are more interruptions and more fun. Pop tunes keep, well, popping up until it seems every Top 40 hit ever composed in a minor key has made an appearance. Just when you think poor Paganini may be safe, he gets assaulted by Cher's "The Way of Love"!

Well, whenever Steve Saugey and Lyova Rosanoff are at the keyboards, such musical shenanigans are the natural order. They are two of Austin's leading parodists, and its royal couple in the realm of spoofing classical music. For decades now, they have been roasting the Old Masters with compositions that mingle their solemn themes with sitcom tunes and commercial jingles or use them to score comical situations. Rosanoff's "Jalapeño Chorus," a local classic, shifts Handel to a Tex-Mex joint, while her "Canon in D" sends Pachelbel down to the "Octopus' Garden" of the Beatles by way of their "Yellow Submarine." Saugey's "Brackenridge Concerto" crams every pop song ripped off from a Bach melody into one dense, 10-minute package, while his "Prelude to the Clair de Lune of a faun with a little flaxen-haired girl thrown in for good measure" just throws Debussy in a blender.

Most of these send-ups have been performed at Esther's Follies, where Rosanoff and Saugey have long histories, but occasionally they've been showcased in independent events such as the Austin Flops Orchestra or Forbidden Classics. A new edition of the latter, headlined by Saugey and Rosanoff, opens this week, which is cause for rejoicing. When the duo presented such a program in 1996 (with Saugey and Rosanoff dressing up as Beethoven and his "Immortal Beloved"; Mozart and his kid sister; Brahms and Clara Schumann; and Chopin and George Sand), to play pastiches of classical compositions, the results were hilarious, a rare tonic for the gravity of the concert hall, an event where the artful music of old was accompanied by the sweet sounds of laughter.

Joining Rosanoff and Saugey for this round of musical mischief are a handful of their friends who are well-versed in the pair's particular brand of nonsense: flutist David Perkoff from the Uranium Savages, conductor William Dick from Austin Youth Orchestras, and vocalist and violist Linda Wetherby, former member of Esther's Follies and Rotel and the Hot Tomatoes. The show is said to give Rosanoff more room to shine, which is a good thing, as she is one of the city's most underappreciated comic talents. If you go -- and you should -- leave your concert-hall manners at home. Polite silence will not be appreciated. This is music for cackling, chuckling, chortling, tittering, sniggering, giggling, and guffawing.