Painter Heyd Fontenot exposes more than himself in his latest exhibition

There are a lot of naked people on the wall at Studio 107 downtown. They're up there, holding books, holding cats, holding -- and wearing -- nothing at all. They're friends of artist Heyd Fontenot, these people, and even though, okay, they're paintings, such is the talent and consideration brought to bear in these renderings that none of the individuals would be mistaken for anyone else. They stand there, looking at us unabashedly from within their frames against the bricks of Studio 107's west wall. So immediate and vivid and many, are the captured nudes, it almost makes you wonder why you're still wearing clothes yourself.

But, okay, not all of the dozen or so full-body portraits are completely undressed. So a man or two might yet be restrained by a pair of tighty-whiteys, so a woman may not have shucked off her lacey bra or panties; still, most of these folks have on nothing but their birthday suits.

"I was thinking about what's more vulgar," says Heyd Fontenot in his small studio in the arty/warehousey district on the east side of I-35, just beyond downtown's more frenetic core. "To see somebody classically nude? Or to see them in their intimate, vulnerable apparel -- no one's ever supposed to see that. So, which is more naked?" 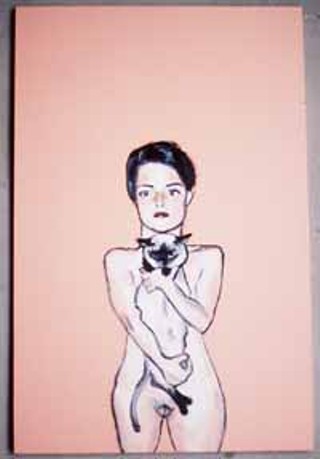 Which is a fine question to pose, but not the only reason to get your friends to pose unquestioningly.

"And, too, I think body politics are interesting in general. Because it's like things get whittled down and whittled down until there's just this narrow way of thinking about something, a tiny window of acceptance of our bodies and what we look like. And I think that's too bad, because people get really unhappy with themselves if they don't meet these crazy standards. It leads to a poor self-image, and to self-destruction like anorexia. And I, I don't know, I kind of want to bring power back to the people. Like, 'Celebrate yourself, be yourself. Your flaws make you interesting, no matter what they are.' Even if, like, you've got a big, fat ass. Because, guess what? Somebody somewhere is really into big, fat asses, and that might be their favorite thing about you. You know? Because everybody is ugly and nobody's ugly."

And even if everybody were nothing but ugly (which the subjects of Fontenot's displayed paintings certainly aren't), and even if the mere idea of naked people causes you instant revulsion, half of Fontenot's show at Studio 107 might still be to your liking. Because he's filled an almost equal amount of wall space there with painted abstractions -- but not the sort of abstractions that your cousin's colicky two-year-old might assay with two tubes of acrylic and a broken trowel; the elements of design are more controlled in the compositions here. Heyd Fontenot doesn't go in much for Abstract Expressionism is why. Heyd Fontenot, when he's not a portrait painter, is more of an Ornamental Pattern man. The abstracts he layers (often with gold leaf) on canvas and wood look like huge swatches of wallpaper from a slightly altered 1950s, the sort of designs you'd see backing the booths of a 24-hour diner in the swankier sections of William Burroughs' Interzone. Or, when the spirit moves him, modern takes on nothing more alien than Pennsylvania Dutch decoration.

"I'm fascinated by patterns," says Fontenot, "and how they reveal themselves. I think there are patterns in everything, but they're often too subtle or obscured by our own filters of perception to be recognized. But I've seen stuff in solid white ceilings: paisleys or Deco patterns or these intricate Moorish designs ... and it's not like I'm recognizing something I've already seen, it's more like I'm finally becoming aware of what's inherent in whatever I'm looking at. Patterns are such an underlying part of the world, of biology, that if we just pay attention, the right kind of attention ..." His words trail off as he scans the ceiling of his studio, looking into the space between the rafters, above the rows of finished and not-quite-finished paintings, the myriad pencil studies, the bits of inspirational other-people's art.

The patterns of this artist's work, too, often extend beyond the borders of an adorned canvas -- and attract all kinds of attention.

"Painting, film, video, photography, writing -- it's all stuff I'm able to do," says Fontenot, shrugging modestly. He strokes the ends of his ruddy handlebar mustache, maybe even blushes a bit. He's not beyond blushing, this Fontenot, and he's a lot more affable and forthcoming, he's just one hell of a lot nicer, than you might suspect such an obviously talented guy might be. "I've always wanted to draw and do creative things," he says, "even though in the environment I grew up in art wasn't seen as anything of value. I was raised in an agricultural family out in Louisiana -- my dad's a farmer, my grandfather was a farmer, both of my brothers are farmers now. And here I was, wanting to paint and draw -- my mother tells me that the first toy I ever had a response to was crayons -- and so I really had to fight fight fight."

Maybe it was this early struggle that shaped Fontenot's adult amiability, that taught him how to deal with the vicissitudes that are part of all complex art projects -- even when the rest of the team is more certainly on your side. Maybe that (and his multifaceted skills, of course) is why he was able to direct the music videos for Ed Hall's "White House Girls" and "Weirdo," for Sincola's "Bitch," why he's credited as editor or art director on films that have made the festival circuit for years, even traveling as far as Brazil's Festival de Manifestacoes das Sexulidades in '94 and '96. And after considering just a few more of his accomplishments -- creating murals for Richard Linklater's Dazed and Confused, costumes for Salvage Vanguard Theater's The Bad Cowboy, set designs for Zachary Scott Theatre Center's The Santaland Diaries -- and after recalling that this is also the man who helped start Austin's Cinemaker Co-op and the In Situ Film Collective -- we might wonder which trades remain that he isn't at least the jack, if not the master, of.

"Where I'm totally lame and weak is with any electronic medium, with any computer-based art," demurs Fontenot. "I mean, I don't know PhotoShop or Illustrator or anything like that. I -- I know how to set type, and that's about it. I'm freaked out by technology, I'm really uncomfortable about it. And I was telling this to my friend Amanda, and she said 'Man, computers are bullshit.' And I was like, 'Amanda, I love you!'"

Fontenot laughs loudly and easily in the image-filled studio, his tall, lanky frame in silhouette against the main window's wash of sunlight. On a far table, brushed by shadows of the artist's fingers, sits a copy of Carson McCullers' Reflections in a Golden Eye. Is the book there because the cover's so evocative, because the title's letters suggest a compelling pattern if you glance at them all squinty-eyed? Fontenot shakes his head.

"That's what I'm reading right now," he says. "I love her work for all of the tragic, complex, fucked-up characters. Because I kind of feel like anybody worth their salt -- or anybody I'd want to know -- is totally fucked up like that. You know? They have these crazy obsessions, the way they organize their lives. And I feel there's such a societal drive for people to be normal and sane and not have any hang-ups. But, I mean, that's what makes you, that's the interesting stuff, why waste time trying to hide it all away? It's like scars, when you have a physical scar. It's part of your history, part of what defines you. It's a testament to your survival."