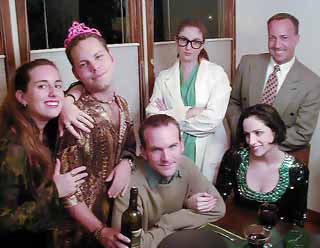 Single White Comedy seeks bright, fun-loving adult audience for good time. No long-term commitment, strictly a one-night stand. Sense of humor a must, old-fashioned sense of romance a plus.

James Sherman's comedy of romance among roomies in a New York apartment is as deliberately constructed as a personals ad and about as eager to look appealing. The story hews to formula as closely as a freshman in a high school chem class, hitting each marker along the classic "boy meets girl, boy loses girl, boy wins girl back" road at a steady pace you can set your watch by; its characters are familiar types with whom you're immediately comfortable; and it's dressed up with enough laugh lines to shame Neil Simon. It's like the play itself really, really wants you to like it and is doing everything it can to make that happen.

In the theatre, as on the dating scene, such an apparent eagerness to please can sometimes signal desperation, a definite turn-off. But in the case of Mr. 80 Percent, at least as produced by Naughty Austin, there's not that off-putting sense of the last-gasp grab for affection. Director Blake Yelavich and crew are just doing their damnedest to entertain their audience. And so they do, serving up Sherman's loopy love story (jaded career gal burned out on hetero men falls for straight-as-they-come Kansas farm boy passing himself off as a Big Apple queen) with a lively energy that's winning even when the show works it a tad too hard in the "love me" department.

Though set in "a Manhattan apartment, today" -- and, man, I've lived in flats that weren't as stylish and nicely appointed as the one realized by Yelavich and Kirk Addison on the Hyde Park Theatre stage -- Mr. 80 Percent feels like it might be taking place a couple of decades in the past. The central plot device comes, er, straight from Seventies TV: Gal-lovin' guys play gay to score roommate situation with attractive women. (And if that doesn't put you in mind of Three's Company, maybe Marisa Pisano's Chrissy-esque bimbo will.) Then there's the play's take on dating, which has a strong Eighties vibe to it: personals ads and singles-scene fatigue and casual sex. There's something almost nostalgic about it, which may be what led Yelavich to load the scene changes with golden oldies from 20 years ago: "Karma Chameleon," "Would I Lie to You," "It's Raining Men," et al.

Whatever is behind this "Flashdance" flashback thing, the practical result is that it makes the evening even lighter, more of a party, than an up-to-the-minute dispatch from today's dating front would be. And this show is nothing if not about having fun. The cast looks to be having a blast, slinging one-liners at each other and playing campy physical shtick. As the two lovebirds, Sam and Sharon, Brionne Davis and Jessica Barst seem to relish playing the awkwardness of their blossoming affair and frustration with their situation. There are also flashes of honesty in Barst's performance that give her Sharon more dimension than you might expect. When she says she's "so tired of being alone," Barst's eyes go a little dead and there's an edge of bitterness in her voice that ring true for the battle-scarred veteran of the singles wars. Playing Sharon's roommate Patricia, Veronica Carey channels all her energy into slinging deadpan barbs at Ben Grimes' Jan. He is the play's designated joker, an archetypal clown whose calling in life is to mock anyone and anything that crosses his path. He's essentially Bugs Bunny, right down to the gender-bending flirtation, and Grimes imbues him with a cartoon character's manic energy. Occasionally he seems to be pushing for results, but he consistently redeems himself with some offhanded shtick or line. The aforementioned Pisano is a hoot as the sex kitten/cat therapist; her explanation of Jungian theory, delivered in a giddy squeak, is a highlight. Paul Parkinson has nothing so flashy to play with in the role of Leslie, Sharon's genuinely gay friend, but his demeanor, relaxed, elegant, and wry, provides an appealing contrast. All these folks mesh nicely together as a team, supporting each other and sustaining the festive atmosphere for the duration of the show.

In the end, that atmosphere is what holds the show together. Though the play is at times hoary, at times fluffy, at times glossy, the company's clear desire to make your time with them a good time and the consistent efforts in that direction, generates a goodwill that keeps the piece engaging. You might not want to spend your life with Mr. 80 Percent, but he makes for a pretty neat date.