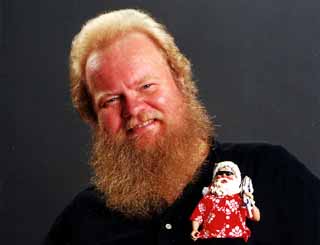 We humans spend a lot of time searching, for reassurance, for comfort, for love. This holiday season, we'll be doing a lot of that, perhaps more than usual, and no doubt many will be doing it at the mall, seeking our solace from a man with a flowing white beard and a cherry red suit.

Santa. From our early years, we see him as an embodiment of, as Carl Anderson says, "compassion, generosity, and love." Who better to turn to in this hour of uncertainty?

Anderson knows as much about Kris Kringle as just about any human living. He has made the study of Santa his life's work, having written a doctoral dissertation on children's belief in Santa, published a book of children's letters to Santa, and played the jolly elf himself for nearly two decades (this month starts his 13th consecutive season at Dallas' NorthPark Center). Now, he's created a new solo show, Searching for Santa and Finding Hope, in which he shares with adult audiences his Claus encounters and the meaning he finds in this loving figure. On the eve of the show's November 1 opening, the Chronicle asked him for his thoughts about portraying Santa this year.

Austin Chronicle:Have you given any thought to what being Santa will be like this season, in the wake of September 11? To what children might be asking?

Carl Anderson: My guess is I'm gonna hear some things from kids who have family members who are somehow involved, who are in the military or the reserves or who have been working for the Red Cross, for them to come home safely.

Some of that is prompted by the parents; you can tell sometimes by the way a child says it that there has been a pre-Santa discussion about it. But sometimes the kids are spontaneously generous and compassionate. I had a 5-year-old totally out of the blue say, "I'm gonna leave some of my old toys out and you can take them to kids that don't have any. I have enough." His mother burst into tears. She had no idea he was going to say that. I'm hoping some of that identification and empathy will be there this year.

AC: Have you experienced a time when world events strongly colored the way children talk to Santa, say, the Persian Gulf War? After Oklahoma City?

CA: Nothing big. If a kid has any kind of personal attachment or connection, they might bring it up. I did have a soldier, 19 years old, come up to me as Santa, and he said, "Santa, I just got my orders for Desert Storm, and I don't want to go." And that took my breath away. So we talked about how that was a natural thing, not to want to go.

AC: Have you given any thought to where Santa was on September 11 or what his feelings are today?

CA: I don't know where he was. My sense is, where he ended up was on a snow-capped mountain somewhere sitting in quiet reflection. You know, one of Santa's gifts is being able to see the world as it could be, as a place of compassion, generosity, and love, and it causes him pain when there are things in the world that happen to the contrary. One of the things I focus on in the show is the example he sets. One of the reasons he's held onto in our culture is that he's one of us. He isn't a magical creature. Oh, he does some magical things, but he's basically a human being who's living as all of us might hope to. And Santa does it year-round. It's one of the things I've been more conscious of through the years, as I've been thinking of the role and the ways of how I want to come across. Santa recognizes that there's no such thing as bad kids or bad people. There are people who do really bad things, but there's no such thing as bad people. He's a figure of compassion, generosity, and love, and one of the things I ask for when I'm in the role is to be able to manifest those qualities.

This year, I think that people will be looking at Christmas as a way to reaffirm the positive, to reaffirm the light. In a time of darkness, grief, and fear, that needs to be balanced by laughter, light, and love, and that's what Santa is all about. You know, since September 11, there's been a lot of talk about the need for diversions. I hope that people don't come to this show I'm doing as a diversion. I hope they'll come to it as a balance. It's what Santa has to offer for adults, and I think a lot of people will look to the holidays for that kind of balance this year.