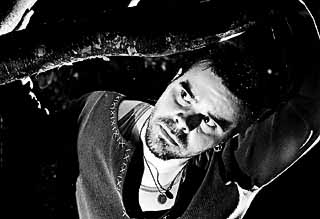 Matthew Patterson in The Deluge

Like most actors who do the bulk of their work for Vortex, the word "daring" goes far in describing what Patterson does. While some may consider it a dubious distinction, Patterson believes that he has appeared totally or partially nude onstage more than any other performer in Austin theatre. That may not seem like much, but start asking actors how many of them would appear nude even once, and you'll understand how rare Patterson is. His talent, however, is more than just skin deep. Despite his boyish good looks, he can play a range of roles in every type of story, from comedy (his Payne and Critics Table wins for The Baltimore Waltz came for a role that is as broadly comic as they come) to drama (a stirring Sidney Carton in A Tale of Two Cities) to cyber-opera (ethos' Triskelion).