You may think you know Don Quixote, but did you know that Man of La Mancha made him a hero to the counterculture? 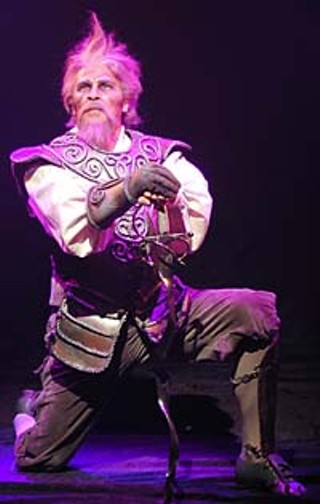 He is he, Don Quixote, the Man of La Mancha, and though you may not realize it, he's a hero of the counterculture, a brother-in-arms to the hippies and flower children of a generation gone.

In the 36 years since Man of La Mancha premiered, time has covered it with a dust of conservatism, even stodginess. Its signature tune, "The Impossible Dream," was one of the last of the musical standards to break out of Broadway and onto the pop charts, where it hit No. 1 in 1966. But the very popularity of that recording, with its creamed-corn crooning by Jack Jones, and the subsequent embrace of the song by Muzak programmers and high school choral directors across the nation led to it being regarded as just another anthem for old fogeys, like Carousel's "You'll Never Walk Alone" -- shrugged off by anyone under 50 with little feeling for its source material. After a couple of decades, if folks thought about Man of La Mancha at all, it was in the shadow of "The Impossible Dream" and assumed to be a safe, staid, easy-listening rendering of a literary classic.

The show is much closer in spirit, however, to the rebelliousness of the youth of the Sixties than their tradition-bound elders. When playwright Dale Wasserman, composer Mitch Leigh, and lyricist Joe Darion resurrected Cervantes' 17th-century knight for the musical theatre, a generation of youth was rejecting the values of what it saw as a corrupt and hypocritical Establishment in favor of a purer, more compassionate way to live, protesting injustices, even when its causes might appear hopeless. Their hero, while considerably older, was doing essentially the same thing: bucking the system, dropping out, going his own way. He left his home, where they didn't understand him or his need to fight for what was right. He championed the downtrodden in the face of much ridicule; heck, he was the original when it came to "tilting at windmills."

Wasserman's adaptation reflects the tone of its times in more than Don Quixote's story, though. It tells the knight's tale through Cervantes himself, who is shown being imprisoned during the Spanish Inquisition and sharing the story with his fellow inmates, using himself, them, and the meager furnishings of their cell to stage a primitive theatrical version of Don Quixote's adventures. That simplicity of approach in the service of greater theatricality was a far cry from the style of conventional musicals, which were plenty theatrical but typically achieved the effect through glamour and glitz. In La Mancha, it had more to do with the "poor theatre" promoted by Jerzy Grotowski in the Sixties, one more movement of the times that sought to discard the excesses of tradition for a return to basics.

So in deciding whether or not to go see Austin Musical Theatre's new staging of the "Impossible Dream" musical, consider not only AMT's impressive history of exceptional productions, not only the near-blinding star wattage of this show's leading performers -- accomplished Broadway artists Kevin Gray and Pamela Isaacs as Don Quixote and Dulcinea, plus Great White Way legend Ken Page of Ain't Misbehavin' and Cats fame as the Innkeeper -- but consider the story of underdogs struggling against authority figures, of the fight against corruption, of breaking with the old to seek something new, a better way, a dream. It might just enable you to see a counterculture hero in an old knight and really hear "The Impossible Dream" for the first time.