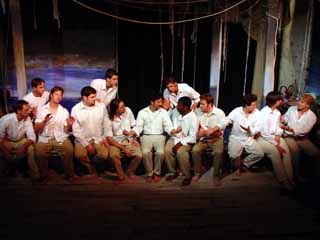 Corpus Christi: By a New Path

The man in the white shirt and khaki pants admits that the story we are about to see is one we've seen before. There will be no suspense; we know how it ends. Still, he assures us, "it's a story worth repeating." And he's right. It's a story of a great spiritual journey, of fulfilling destiny, of love and forgiveness, betrayal, of sacrifice on a grand scale -- perhaps, as many believe, the greatest sacrifice in human history. It is the story of the son of a carpenter and the Son of God who are one and the same, the story of Jesus. Whether or not you believe in the divinity of Jesus, his story delivers a powerful message of compassion, faith, commitment. It is a challenge to each and every one of us to accept our fellow human beings, to love them as ourselves, and to give up all that we have for them.

All of that remains at the heart of Corpus Christi, Terrence McNally's retelling of the Nazarene's ministry and passion. Yes, the playwright puts his own spin on the tale -- a spin that prompted threats to blow up the Manhattan Theatre Club when it premiered the play in 1998 and just this summer prompted 21 members of the Indiana General Assembly to file a federal lawsuit to stop a production at Indiana University-Purdue University Fort Wayne -- but while McNally's changes in setting and context are integral to his singular exploration of the Gospel story, he preserves the tale's essence: the mission of the ministry, the mystery and miracle of Christ's divinity and humanity, the fulfillment of his destiny, his profound sacrifice. These elements aren't just presented by McNally, but related sincerely, with the respect of a believer.

This is a play about love, about compassion and generosity and tolerance. Setting the Gospel story in 20th-century Texas and making its protagonist a gay man is, without question, a provocative move, and no one is suggesting that McNally did not realize that a gay Jesus would offend many Christians. But it is not, as some unfairly assume, a move made for the purpose of mocking Christ and his followers. Rather, it is a means to find Jesus' story in our world, in a place and time that has immediacy for us, that helps see the man of Galilee as more like we are and yet also as the outsider he was considered in his world: the one who broke with tradition, who preached a revolutionary message, who, in the eyes of many, blasphemed. McNally makes it work much of the time, as when McNally's Jesus, called Joshua, is brought before Pontius Pilate and mocked as "king of the queers" and "faggot." The jeers are familiar, recalling the casual viciousness against homosexuals so common in our society today, but they also open the door for us to wonder if this is how brutally -- and casually -- the term "Jew" was spat out when Christ was crucified. We cross the gulf of time in such moments, gleaning a greater understanding of both our own world and one 20 centuries ago.

Our guides on this journey are 13 men, all dressed in white shirts and khaki pants. One represents Jesus, and each of the rest one of his disciple, although they also play other characters in Jesus' life: Mary, Joseph, Lazarus, Pilate, even the Lord God Himself. Their means of telling the story are humble -- four benches that sit on a floor of weathered wooden planks, ropes and netting that suggest the tools of fisherman, a few simple props -- but they bring to the story an enthusiasm that does more to make the tale come alive than the most elaborate costume or prop could. The actors in this version by Real Rain Productions also bring to the story their own distinct personalities, which they invest these characters with help us see these men in Jesus' life -- so easily blurred together in the Biblical text -- as individuals of diverse backgrounds and callings whose lives were profoundly altered by their contact with this fisher of men. Perhaps most significantly, they bring to it a sense of fellowship that convinces us of the unity in this brotherhood of believers. These are men united in their commitment to this story and what it has to say, and the warmth that radiates from the bond they share goes a long way toward drawing us into their circle. It works somewhat the way -- and I hesitate even to mention this for fear it will be taken the wrong way -- but it works somewhat the way Godspell does, at its best, or maybe as it did when you discovered Godspell: bringing us to this old, familiar story by a new path, opening it to us through theatricality, through modern idioms, through irreverence, through ensemble.

Director Rick Fonté gives us a tender, funny, dramatic, touching, very human exploration of the Gospel story. That a play which so clearly speaks out against inhumanity and calls for us all to embrace humanity should be on the receiving end of so much vitriol is ironic. Then again, in the venom directed at Corpus Christi, we see another bridge across the gulf of time, pious critics assailing a messenger of peace, which is nothing if not the experience of Jesus. In the prologue to the play, one of the actors explicitly assures us there is "no malice in our hearts." We're told, "We're glad you're here." The sincerity of the performance bears out that sentiment and leads us to return it.