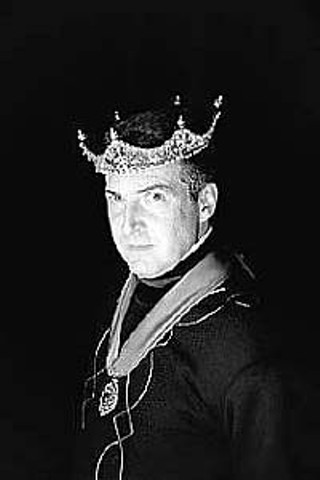 The man's head is inclined ever so gently downward, his face marked by the most pious expression; it gives him the reverent aspect of a plaster saint. He appears absorbed in the small book in his hands, which given his outsized rosary, is surely a prayer book. Is it any wonder then that the delegation of politicos that has descended on him thinks this man a devout believer and their best hope to serve as England's next king? And when he rejects their entreaties to assume the crown, arguing that he is unworthy, is it any wonder that they are even more convinced of the godliness and goodness of Richard, Duke of Gloucester?

So why are we the audience laughing throughout this scene in the new production of Shakespeare's Richard III staged by the Disciples of Melpomene? Well, because we know we're witnessing a performance by this Richard, that he is in fact hungry for the throne -- he's told us as much directly in one of his many soliloquies -- and he's already practiced all manner of duplicity and depravity, including murder, in his quest for the monarchy. Yeah, he has about as much gentility as Torquemada and half the Christian charity. That he should pose as some humble man of God is a travesty, and the rank audacity of it makes us roar.

Of course, behind Richard's performance is another performance, that of the estimable Austin actor David Stahl (see the Arts feature "Playing the Bad Guy," p. 36, for more on him), and it is his crafty and well-crafted portrayal which drives this show. Director Marco Noyola's approach to the staging is spare, with few interpretive or visual flourishes. With a set consisting of a step unit leading to a small above in the black-curtained wall at the back of the Vortex playing space and costumes blending built outfits and street clothes, the show has, to crib a line from another Shakespearean drama, "that lean and hungry look."

To be fair, Noyola acknowledges the show's limited production values in the program, noting that the "Disciples are striving to improve the quality" of their shows but that realizing their dream "is still a ways off." And occasionally he is able to transcend his company's current limitations, as in the depiction of the death of Richard's wife Anne, which begins with king and queen framed in the above at the top of the stairs, she straddling her husband's lap, seemingly in a contented embrace, then has her suddenly pitch backward, completely limp; the effect is unexpected and chilling. Still, the overall look and the feel of the show is slight, a hazy suggestion of a world for the play rather than a full-blown vision.

That leaves it pretty much to the actors to create a setting for the drama and propel it forward. Noyola has assembled a largely capable cast, with actors who can make the Bard's text both audible and clear -- and do, although, much as with the production values, they have their limitations. While their talents are sufficient for communicating the story, they rarely display the kind of spark that makes the characters and their individual tales vivid and compelling. We may see an action yet not feel where it springs from in the character, may understand what someone is doing yet not grasp why. The shifting attitudes of the characters as their situations change, as they go from Richard's inner circle to the Tower of London, from his embrace to the point of his sword, is sometimes indistinct, pale.

The chief exception to this, as you can imagine, is Stahl's unholy Richard. He embodies the villain with an always fascinating brazenness, getting right in the faces of his victims and proclaiming his innocence, or pledging his undying fealty (or worse, love) with a voice as sticky-sweet as syrup and eyes as guileless and sincere as a week-old puppy's. (Stahl masterfully makes use of -- and perhaps a little fun of -- his own sweet nature and straight-arrow looks in Richard's manipulations.) It's so true-blue as to skirt being over-the-top, which is why it tickles our funny bones so, but Stahl keeps it carefully in check, never losing Richard's "performance" to camp. Quite the opposite, actually; he is quick to distinguish between the "play" Richard and the real one, giving us a steely-eyed, sneering snob whenever he's relating his plans for conquest to the audience. And once Richard has snared the crown, Stahl turns on the paranoia, turning up the fire in his eyes and voice, pacing anxiously and spouting invectives so hot as to blister. It's a performance that swells and contracts like a bellows, and like a bellows, feeds a bright, ceaselessly engrossing blaze.

A few of Stahl's colleagues rise to the bar set by the leading man -- most notably Bernadette Nason, whose Queen Elizabeth, enraged by Richard's murder of the two young princes, comes at him like a Fury, matching Stahl in intensity and full-bloodedness of character -- but this is really Stahl's show, a performance built around performances by a master actor on the stage of life.