The World Goes 'Round 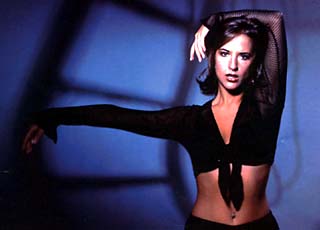 The World Goes 'Round: Come to the Cabaret

Remember those old-fashioned musicals, the ones with the sweet-faced ingenues falling desperately in love and singing their undying devotion to each other in entrancingly melodic ballads?

Well, this ain't one of 'em, not by a long shot. In fact, in the 30-plus songs that comprise the revue The World Goes 'Round, every one by the prolific and accomplished musical team of John Kander and Fred Ebb, there's nary a moonstruck innocent nor sunny tune pledging eternal troth to be found. Instead, there's a parade of worldly figures, all of whom seem to have been there and done that, singing wistful refrains about lost love and faded dreams or belting out lusty resolutions to wring whatever pleasures can be had out of this messy, mucked-up world.

No, the "world" according to Kander & Ebb is a far cry from that of, say, Rodgers & Hammerstein. Still, when you see the Zachary Scott Theatre Center staging of this show -- and you will see it if you have any affection for musical theatre -- it's instructive to recall those upbeat and effervescent musicals of yore, for Kander & Ebb draw so heavily on them: for melodies, for moods, for a sense of days gone by. They'll use musical styles from the era of vaudeville to evoke the feel of the Twenties, of cabaret to conjure the Thirties, to put us in those times. But they'll also use those styles to play off our distance from those times, to tickle our memory of yesterday. Kander & Ebb characters often find themselves recalling what was, measuring the space between the tarnished present they inhabit and a golden past, when there was romance, magic, class -- something that made it "the happy time" in their lives and that's missing from their existence today. The songs they sing blend a realist's acknowledgment of the way the world works, the cruelties and disappointments that are the natural order of things, with an aching whiff of long-ago sweetness: beauty, melody, joy. Though Kander & Ebb are by no means the only songwriters who can bring together salt tears and sugar sentiment so masterfully in their work, it may be their signature -- and their great gift to popular song. They are poets of regret and longing and forging on despite the pain, our bards of the bittersweet.

And in the production at Zach, they have the good fortune to have their poignant work (which, it must be said, can be as raucously funny as tenderly sad) celebrated with the panache and rich feeling of … well, one of those old-fashioned musicals, those beautifully crafted, sublimely entertaining musicals of the past. Director Dave Steakley immerses us in the ambience of old-school theatre from the moment we enter the cozy Arena Stage space. We're greeted by a ghost light, one of those bare bulbs on a stand that keeps a lonely watch over the stage when the theatre is dark. Above it hangs the detached corners of a marquee, festooned with bulbs and dripping red drapery, and around the walls designer Cliff Simon has set sandbags, a rack of costumes, a spotlight perch. It's almost as if we've wandered into the tomb of some grand old thespian.

But then the players enter, and the five fine talents that Steakley has assembled here prove that the kind of performance once practiced in the theatre this space suggests is very much alive. Ian Scott plays host, welcoming us in the guise of the Emcee from Cabaret, and his easy manner and crisp gestures, devilish smile and robust delivery, are vivid reminders of his memorable take on this part several seasons back at the State. He is the production's clown, donning a periwinkle bonnet for the Chicago number "Me and My Baby," carting around a 10-gallon caffeine fix in "Coffee in a Cardboard Cup," rhapsodizing madly about baked goods in "Sara Lee," each time delivering the shtick with the brio of one born to the greasepaint.

Gerard Lebeda takes the role of lover, serving up ballads of disillusionment and heartache -- Funny Lady's "Isn't This Better," the title song from The Happy Time, as well as its "I Don't Remember You" -- with a sorrow finely etched in his expressive tenor. And when he cuts loose, as in the title song from Kiss of the Spider Woman, his vocal power and command call to mind that good old theatrical type, the showstopper.

Jill Leberknight is his female counterpart, yearning for the past and hoping for the future in the love songs "We Can Make It" and "Colored Lights" from The Rink and "A Quiet Thing" from Flora the Red Menace. She finds the ache in these songs and pulls them forth with a tender delicacy beyond her years. But she too has a bolder side, which she shows in numbers such as "All That Jazz." Despite it being one of the most well-worn songs in the Kander & Ebb catalog, Leberknight makes it her own, sidling into it and slinking around in it with a vamp's delight.

Rebecca Schoolar, whose sunny face and bright soprano might make her seem an unlikely candidate for the midnight blue world of Kander & Ebb, shows that her range is not to be underestimated, tackling two of the duo's big diva numbers -- Liza with a Z's "Maybe This Time" anthem from the film Cabaret and Barbara with a B's double-edged "How Lucky Can You Get" from Funny Lady -- with a stirring emotional depth and force. (Though it's useless to deny the pleasures in her joyous, rousing rendition of the comic saga of romance through world travel "Ring Them Bells.")

Last but never least is the ever-elegant Karen Kuykendall, whose credentials in cabaret are formidable and who's in her element here, her dry demeanor and husky voice perfectly suited to the seen-it-all air of Kander & Ebb's world. She pitches the so-it-goes philosophy of the revue's title song with a knowing flair that says she has the scars to show for her point of view. She effortlessly dishes up drollery in the testimony to post-meridian peccadilloes "Arthur in the Afternoon" and in two hilarious duets, the low-rent lamentation "Class" with Ian Scott and the envy-fueled "The Grass Is Always Greener" with Rebecca Schoolar. And she looks quite the dish in her black fishnets that smoothly sheathe her legs all the way up to the hem of her black double-breasted jacket. Kuykendall epitomizes the virtues of the old-school performer -- smart, talented, disciplined, always there -- and it's a treat not only to see her in a vehicle so neatly matched to her but which partners her with a quartet of performers who share those virtues.

Steakley gives this ensemble abundant opportunities to display their skills: in richly textured solos, in vaudevillian shtick, in Andrea Ariel's razzle-dazzle jazz hands and dance steps (oh, does she know how to channel Fosse!), in tightly clustered harmonies that recall the Manhattan Transfer and Lambert, Hendricks, & Ross (more vocal magic from musical director Allen Robertson). The show is stuffed with show-biz delights. It's not often that we get to see the pop-musically inclined Steakley work in such a traditionally theatrical idiom, but he proves himself as deft with old Broadway and the music hall as with the rock concert stage.

With another crack Zach team, including costume designer Leslie Bonnell and lighting designer Jason Amato (both unfairly neglected here), Steakley has crafted a gem of a show, one that could be easily lost in the dog days of August, as audiences and artists are already looking ahead to the next season. But it doesn't deserve that fate. The World Goes 'Round deserves to seen and savored. As much as Kander & Ebb detail the pain of this world, the injustices, the loss, they also emphasize again and again that we should fight the tide of disappointment and sorrow. "Say yes!" "You got to ring them bells!" "Come to the cabaret!" They want us to take pleasure in the world, as much as we can. Well, here's a World to take pleasure in. Indeed, come to the cabaret.