With the Debut of the Soul to Sole Festival, Acia Gray Gives Women Who Tap Their Due Acia Gray has been dancing in this community for so long, it might not occur to most people that there's something radical about her. But there is, and it's this: She's a woman who taps.

That may not sound like much of an extreme, but in the world of rhythm tap, female dancers are a minority, and women who are masters of the form, as Gray assuredly is, are merely a fraction of the whole. No doubt you fans of movie musicals are already raising your voices in protest; after all, the glory days of the Thirties and Forties boasted a bevy of starlets tapping their way through Tinseltown: Shirley Temple, Ann Miller, Ginger Rogers, Ruby Keeler, Eleanor Powell, Vera-Ellen. Yes, but when you work your way through that chorus line, you've covered a goodly portion of the leading women tap dancers from the whole first half of the century, screen and stage.

The fact is, like so many things, the form of tap has always been dominated by men, from its embryonic days in early 20th-century vaudeville though its popularization in jazz clubs and the theatre of the Twenties and on into its entrenchment in the mass-culture via the feel-good fantasies of Depression-era Hollywood. Even with the dramatic increase in the number of women who tap since the form's resurgence in the early Seventies, the leading figures in tap are still mostly men. And of course, the only figure even approaching true media stardom as a tap dancer today -- Savion Glover -- is a man.

Gray isn't bitter about the historical injustice where women and tap are concerned -- "I just think it's the nature of when the art form got started," she shrugs. "Most of the women were in the chorus, and the chorus women were just never given the opportunity to headline" -- but she's doing her bit to make sure that in the 21st century, women who tap get their due. Besides continuing to run a dance company that prominently features rhythm tap in its concert and academy courses (Tapestry, the multiform dance company that she and Deirdre Strand founded in 1989), Gray is founding a new dance festival which not only celebrates the undervalued form of rhythm tap but puts the spotlight on women in the profession. 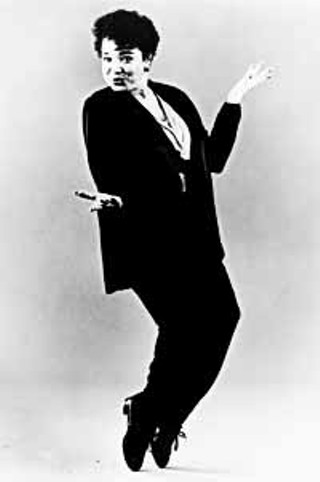 The Soul to Sole Tap Festival, running May 18-20 here in Austin, is a weekend of master classes, jam sessions, and a special concert performance led by Gray and two other female stars of tap, Dianne Walker and Sarah Petronio. Walker is the artistic director of Tappin' Boston and can lay claim to being one of the pioneers in the tap renaissance of the Seventies, training with many of the old school masters of the form: Mildred Kennedy, the Nicholas Brothers, Henry LeTang, Cholly Atkins, Honi Coles, and Leon Collins, who served as her mentor. She can lay claim to having been not only assistant choreographer/dance captain for the Broadway production of Black and Blue, and a featured dancer in the original Paris incarnation, but also the only female dancer in the show's prestigious "Hoofers Line" that included tap legends Lon Chaney, Jimmy Slyde, Chuck Green, and Bunny Briggs. Petronio is a resident of Paris where she moved as a young woman and became the dance partner of the great Jimmy Slyde. Through their teamwork, French audiences came to know the joys of rhythm tap, and she helped bring the dance to the world of jazz, dancing in clubs and jazz festivals across Europe. She founded the Tap Dance Department of the American Center in Paris and the Gît-le-Coeur Cultural Center, and during a stint in the States in the mid-Nineties, when she worked on the faculty of the Dance Center of Columbia College, she founded the "Chicago on Tap" dance festival.

As is clear, these are women with some serious tap credentials. And they're not alone. Gray can reel off the names of a half-dozen other pioneering women in the field without even having to think: Jeni Le Gon, one of the few well-known women of the era of the greats -- "and she could dance with the best of them," Gray notes; Brenda Bufalino, who studied and performed with Honi Coles and who founded the American Tap Dance Orchestra, an ensemble of dancers who use their feet to create musical tones and rhythms; Lynn Dally, director and co-founder of the acclaimed Jazz Tap Ensemble, a model for tap companies across the globe; Linda Sohl-Donnell, artistic director and choreographer for Rhapsody in Taps, a Los Angeles-based touring company now in its 20th year; Anita Feldman, founder of the Modern Dance Tap Company in New York and author of Inside Tap: Technique and Improvisation for Today's Tap Dancer. All have made major contributions in keeping tap alive for the past quarter-century and have advanced the form. And then there's Gray, no slouch herself: founding member of Austin on Tap, in its day the busiest touring tap company in history; co-founder and artistic director of Tapestry, now in its 12th season; student of Honi Coles and Jimmy Slyde; performer with Chuck Green, Lon Chaney, Savion Glover, and Gregory Hines, as well as Bufalino, Walker, and Petronio; author of The Souls of Your Feet: A Tap Dance Guide for Rhythm Explorers. Still, for all their contributions, Gray says of herself and her peers, "We're a minority in this world of hoofers; we all have to follow Savion. We have to play within that macho game. Dianne will watch them from the wings and say, 'It's the boys club.'"

So it means a lot when women in tap connect. When Gray was just starting out in the field, the pervasive influence of male dancers made itself felt in her own work. "I had my first professional gig having to dance in drag," she recalls. "Brenda said when she first met me, I was this short-haired, prizefighting tap dancer." It took Gray time and exposure to other women to see another side to the form. "What Dianne and Brenda and Lynn and those women who are 10, 15, 20 years older than me had was a subtle elegance. It doesn't mean they can't be fast as men or that the tricks aren't there, but there's an emotional nuance in any situation as a female. We tend to dance from our emotional side. That's not to say that men don't, but most of the time the men are dealing in their speed, the skill, the competition." Through her female colleagues, she's discovered the pleasures of a less aggressive style. "As Brenda has said, 'The magic is finding your relaxation,' and the older we get as women, the more we find maternal relaxation is an elegant place to tap dance from," Gray says. Then she adds with a bit of a laugh, "And you know, you can flirt when you dance."

When Gray conceived of a tap festival that would recognize women in the field, she didn't have to think hard about who she wanted to be the event's first featured artists. Both Dianne Walker and Sarah Petronio have a prized place in her heart. Walker was present for a very special moment Gray enjoyed during a concert at last year's St. Louis Tap Festival. Gray was on the faculty for the festival, along with Walker and such tap masters as Donald O'Connor, Cholly Atkins, Jeni Le Gon, and Henry LeTang, and she danced at the event's big performance. "I did a solo to Caravan, and for some reason that year, they set the stage up so that the masters were sitting on the stage and as I'd dance I'd look over at them and play with them. I finished, and I turned to pay tribute to that group of people, and the first image I recall was that they were all standing up. That was one of the biggest deep breaths I've ever had to take. I've danced around these people for years and for them to give me a standing ovation ... The second image was through Dianne's eyes and her smiling back at me."

Gray and Petronio developed an instant bond. They met when Gray was chosen for a residency with Jimmy Slyde. At the time, Petronio was Slyde's partner. "When we first met, it was as if we had known each other forever," Gray remembers. "She's been just like a sister and has been a big influence on me. Sarah brings to me and to the tap community an elegance and a mastery of jazz improv from the perspective of the Paris jazz clubs. One of the first times I danced with Sarah was in a jazz club, and you can't get any more real than that. You're so in touch with each other. It feels like one voice. And that's what makes this evening at One World so perfect."

The finale of the festival is a performance at One World Theatre, the intimate music and dance venue in the hills west of the city. There, Gray, Walker, and Petronio will share the stage with guests Nicholas Young of Tapestry and Mark Yonally and Brenna Kuhn of the troupe Especially Tap Chicago in a program of solos and duets. "The atmosphere of the evening will be not unlike an elegant jazz club where we're talking with each other," Gray says. "The show will be all improvisation. Any choreography will be tribute choreography. You don't want it to be too structured. We'll discover when we get there Sunday morning what we're in the mood for. Are we in the mood for Monk or Sonny Rollins? It'll be a mix of some blues, some Latin, some swing, some funk." And jazz, definitely jazz. After all, says Gray of her tap-dancing friends and colleagues, "We're just like jazz singers. We're just singing with our feet."

On Saturday, May 19, at 4pm, the focus of the festival switches to performance with the 11th Annual Tapestry Tap Jam in conjunction with National Tap Dance Day. Members of the Tapestry Dance Company, Tapestry's training company Visions in Rhythm, Austin tap dance king "Smokey" Rhodes, and jazz combo the Rich Harney Trio will jam together at Central Market, 4000 N. Lamar. Admission is free.

On Sunday, May 20, at 7:30pm, the festival will close with a concert featuring Gray, Walker, and Petronio, with guests Nicholas Young of Tapestry and Mark Yonally and Brenna Kuhn of the troupe Especially Tap Chicago. The program of jazz and tap improvisation solos and duets will take place at One World Theatre, 7701 Bee Caves Rd. Call 469-SHOW for ticket information.