A Boone to Austin Theatre

In 10 Years of Leading Frontera Productions, Vicky Boone Has Touched Many Lives and Changed the Community 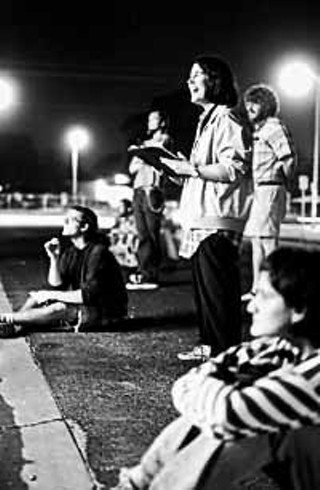 Okay, time to play the It's a Wonderful Life game: What would the last decade of Austin theatre look like if Frontera Productions had never existed?

To begin with, the stage scene would be missing several of the most acclaimed productions of the Nineties. Five times in the past 10 years, Frontera was honored with the Austin Theatre Critics Table's award for Outstanding Production of a Drama. Four times it was voted the Austin Circle of Theatres' B. Iden Payne Award for Outstanding Production of a Comedy. No production of The House of Yes or The Water Principle or The Race of the Ark Tattoo. No Weldon Rising. No And Baby Makes Seven. No Silence, Cunning, Exile.

The scene would also be missing numerous artists from across the country who found a creative home in Austin with Frontera. No Daniel Alexander Jones. No David Hancock. No Laurie Carlos. No Kristen Kosmas. No Grisha Coleman. No Hopeful Monsters. And missing with them would be the shows that they helped bring into being or shared with audiences through their presence here: Black Power Barbie in Hotel de Dream, Blood:Shock:Boogie, Deviant Craft, The Race of the Ark Tattoo, Alaskan Heat Blue Dot, slip, Enfants Perdus, Cab and Lena, The Bacchae: Torn to Pieces.

The scene would never know the contributions of those folks who moved to Austin and made it their home because of Frontera. No Annie Suite. No Jason Phelps. And without them, not only no memorable work from them for Frontera -- no Weldon Rising, The Water Principle, And Baby Makes Seven -- but no work from them anywhere else in Austin. No teaching or acting or managerial guidance from Suite at St. Edward's University. No Prior Walter from Phelps in the Zachary Scott Theatre Center's Angels in America.

Some of the most noteworthy and important work from the scene's leading lights would likely be lost. Possibly no Managed Care, Millennium Bug, or Curb Appeal from playwright-performer Steven Tomlinson. Possibly no blood pudding or con flama from playwright Sharon Bridgforth. Definitely no Enfants Perdus or Heavenly Shades of Night Are Falling from playwright Erik Ehn. No The House of Yes or The Swan with actor Katherine Catmull. No House or The Water Principle with actor Ken Webster. No Silence, Cunning, Exile or Deviant Craft with actor Aimee McCormick. No Weldon Rising or And Baby Makes Seven designed by Christopher McCollum. No MADIzms, Alaskan Heat Blue Dot, or Polaroid Stories with writer-performer Zell Miller.

And of course, with no Frontera there is no FronteraFest. Lost are all the performances and productions -- all 650 of them -- that have been affiliated with the festival since its inception in 1993. No Short Fringe. No Long Fringe. No Mi Casa Es Su Teatro. And no FronteraFest shows graduating to a life beyond the Fest, as with Tomlinson's Free Trade, Managed Care, and Curb Appeal; Jones' Blood:Shock:Boogie; Miller's MADIzms; Kosmas' slip; Mary Lou Pilkinton's Wandering Through the Night and Mizz Romaine; Jennifer Haley's Domain; Stephanie Swenson's Gap Pants; Ron Berry and William Walden's Water; Joy Cunningham's Goin' to Georgia; Tiana Hux's Yes/No; Cyndi Williams' Woman at the Window; Brian Shapiro's And You Come From Where?; and Guy Roberts' A Macbeth, among others.

The scene might even be missing a venue. When Hyde Park Theatre manager Eva Paloheimo left Austin in 1997, Frontera was there to take over the space. If the company had not existed, would the theatre have closed its doors? The possibility exists, and with it the possibility that numerous projects that have been mounted in that space over the past four years might never have come into being.

All right, game over. That should be enough of a round to demonstrate that Frontera, like George Bailey, has touched many, many lives in its time and had a profound effect on its hometown. It's surprisingly easy to lose track of that fact through the years, to let slip one's sense of all the contributions, large and small, that a company or an individual has made to a community, and it seems only fair to review the record and seek to restore that sense of the larger picture when the person or group reaches a crucial moment of passage. And Frontera has certainly reached such a moment with Vicky Boone's resignation as artistic director for the company.

You can't say much about Frontera without talking about Boone. The company would not exist without her. She hatched the idea. She moved to Austin to make it happen. She made the calls to friends around the country and persuaded them to join her here and make the company a reality. She took on the mantle of artistic director and became Frontera's guiding spirit, in terms of both her aesthetic sensibility and her remarkable generosity. And she sustained her creative vision for the company, sometimes through periods of extreme personal and professional challenge, for 10 years.

The company and Boone are so entwined that you could have played the game above using Boone's name in place of Frontera's and gotten much the same results -- only you can be sure that Boone would have responded by pointing out that she wasn't solely responsible for any of the accomplishments of Frontera, that its achievements came through the work of many hands: all the artists and technicians and patrons and support people that contributed their time and interest and resources to the company.

And in a sense, she's right -- many, many folks have helped to make Frontera what it is today -- but Boone has always been at the center of it all. She is "the heart and soul of the company," as board member Paul Alvarado-Dykstra put it. Frontera, according to company member Daniel Alexander Jones, is "a direct extension of her vibrant consciousness," and every success that Frontera has enjoyed, every sold-out house, every standing ovation, every grant, every praise-filled review, every award, owes something to her leadership, her artistry, her big-heartedness, her inspiration.

Of course, having one person so deeply invested in and identified with a company has its risks. If that person ever leaves, it can throw the entire future of the company into question. It's happened here before: In so many ways, Michel Jaroschy was Capitol City Playhouse, and it turned out that theatre could not survive without him. When Boone announced her resignation, it prompted people to wonder whether Frontera would suffer a similar fate -- and whether perhaps that would be for the best. What would a post-Boone Frontera look like? Would it be possible to find someone whose vision of the company was similar enough to Boone's to sustain the character of the company as it has existed for 10 years? And if it wasn't and the character of Frontera changed, would it still be Frontera?

These questions have been under serious discussion by the Frontera board ever since Boone notified them of her plans. The members of that body know what is at stake and are trying to negotiate this transition as sensitively as possible. At this crucial juncture in its history, Frontera is fortunate on two counts: one, that it has a board that is deeply passionate about the company and willing to roll up its sleeves and work out the best possible direction for its future; and two, that its guiding spirit remains a member of that governing body and is willing to stay on and determine what that direction should be. That there is activity and that Boone is involved in it should be encouraging to fans of the company.

While no one is able to say definitively at this moment where Frontera is headed, the early word is reassuring. Alvarado-Dykstra reports that the board has "been having extremely positive, constructive meetings" and has dispensed with the idea of dissolving the company. Moreover, it has identified two priorities of equal importance: keeping Hyde Park Theatre alive as a performance venue and keeping FronteraFest alive as a program. "Above all else," he says, "we are absolutely committed to achieving these goals."

Barring unforeseen complications, then, Frontera should have a future not unlike George Bailey's: continuing to touch lives and affect its hometown for some time to come. And as long as we're back in Bedford Falls territory, it's worth recalling how the finale of It's a Wonderful Life plays out: with all those people whose lives had been touched by George Bailey crowding into his home to thank him for all he'd done and showing their support for him. If Frontera has affected you in some way, if you think Austin is better for it being here and for the presence of Vicky Boone, this is your cue.