Theatre -- ALL CAPS, All the Time 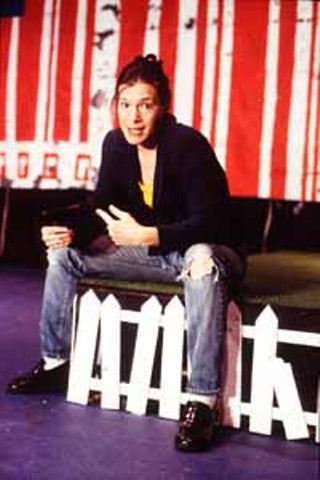 Sharon Sparlin, ready to shoot up the set of Troilus and Cressida. (Photo By Bret Brookshire)

Sharon Sparlin panics when she's not working. "Saturday mornings, I make myself sit, get some tea, don't do anything until noon," the Austin actor and director says. She has to practice at this. It's a lot like trying to practice strapping down a short-fused Roman candle.

Overcommitted? Yes, sure. "That's normal operating procedure," she says, but it also means "I'm not sitting here, the end of a run, thinking, 'What am I going to do next?' There's none of that panic." She knows that there's work because she is constantly creating it. 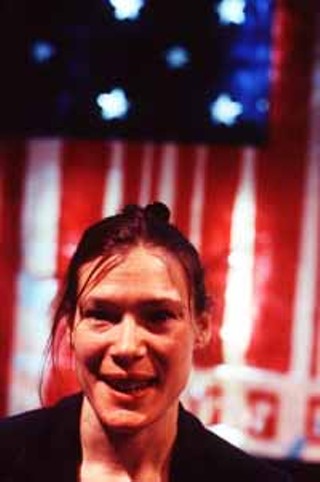 Sparlin moved to Austin from Ohio in December, 1998. "I wanted to be warm," she says. Salvage Vanguard Theater's Christmas show at Little City coffeehouse was the first thing she saw, and it compelled her to dive into the scene herself. She saw that the Public Domain theatre company was doing her favorite play, Bertolt Brecht's The Life of Galileo, so she walked across Congress Avenue to what was then the PD space. The company had already had auditions, but if there's one word to describe Sharon Sparlin, it is undeterred. She told director Robi Polgar that she would do anything. "He said he needed a props person. I said, 'Great, I'll do that.' Then, when it came to the first rehearsal, he said, 'Well I really need more people, if you know of anybody.' And I said, 'Me.'" She raises her hand high.

Her piece for the 2001 FronteraFest, "Cement, Metal, Wood, Brick!" was super-powered choreography. Her dancers flung themselves head-first over the bicycle racks in front of the theatre. They pirouetted off the cement curbs, into oncoming traffic on 43rd Street, and around, over, and on top of a waiting vehicle. It seemed that the streetlights soaked up some of that energy and shone a little bit brighter the rest of the night.

The piece's success surprised Sparlin because she was, uncharacteristically, just playing around. Alley, bike racks, curb -- it had all just looked cool. No meaning, no deep purpose to work through. Generally, she says, "I have very specific ideas. They're very clear in my head." She's very open about her control issues.

Although she choreographed in college, she didn't study dance growing up. She just "picked it up." She earned an undergraduate degree in psychology, rather than theatre, at Ohio Wesleyan University -- "The neurotransmitter-esque," she's quick to point out, "not the social worker-esque" -- because she likes to study. "I love science. And I read physics all the time. I want to do a science show. Like Bill Nye."

Really, Sparlin hasn't stopped drumming up work since arriving in town: She counts nine productions in just over two years. Actress Rebecca Robertson remembers first meeting Sparlin in a 1999 Public Domain production of Torch Song Trilogy. "She was not only acting in the piece, but there obscenely late every night helping with whatever needed to be done." Along with Public Domain, Sparlin has worked with a host of small, very physical troupes from Bent Spectacles to Disciples of Melpomene. She performed the title role in the Disciples' production of Macbeth last year and just finished directing Troilus and Cressida for her new theatre company, co-founded with Robertson, called iron belly muses. "Lowercase," she specifies, "ibm." It's really the only lowercase thing about Sparlin. Everything else is bold, animated, electric even -- but at the very least, all caps.

Although iron belly muses is a women's theatre company, supporting female theatre artists with visions, as Robertson puts it, "outside of the frilly pink box," Sparlin is vehement about not characterizing the group as "feminist." She doesn't like that word. "It's so vague by now, it means so many different things," she says. "And I didn't want the image of a radical group. We're a theatre company of women. There's no better way to say it."

While the company's focus is on women's issues or plays by women, "That doesn't mean we're doing just women's stuff," she insists. "There are 14 boys in Troilus." One woman -- Robertson -- will play all three female roles in the production. "I got to Troilus and Cressida because I was doing a piece on Helen of Troy," Sparlin explains. "And I wanted to see how Shakespeare treated Helen. And I read this play, and I thought, This is a great play. Helen's not in it. But it's a great play."

Helen does have one scene, and in the iron belly muses production she'll appear in a shopping cart. The Trojan War will be turned into a war on capitalism, a war of brand names, and Helen is "the goods." Sparlin is quite proud of the details. "Cressida appears behind a life-size cutout doll. And Cassandra is a rock star. She's in a cage. She can't get out because she tells the truth." Even with a surplus of male roles, she focuses on what's happening with women. "We're seeing a lot of women's issues in this play." Sparlin says that iron belly muses has a three-pronged attack. "Plays by and about women. And I really want to get women involved in tech." 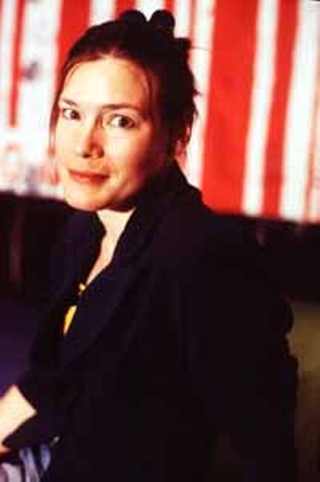 Members need to be not only interested in theatre, but also willing to take on a variety of jobs. This has an empowerment as well as a deeply practical purpose. "As I said to our members, if a techie says, 'Don't stand under that fresnel, it's not locked down,' you don't have to say, 'What's a fresnel?' And of course, the actors were like, 'What's a fresnel?'" A fresnel is a particular kind of lighting instrument. If you didn't know that, call Sparlin, she's got a wrench with your name on it.

The third arm of the company is community relations. They will not only offer dance and performance classes -- Sparlin taught a five-week course last fall -- but also other unique outreach projects. "We have a conversation group, so they're not lectures, they're conversations. So they're things like, 'My grandmother's voice.' You come and talk about your grandmother, stories about your grandmother. Last time it was just a company thing, but it's going to be a public thing." Sparlin says that the response was incredible: "Yes," they said. "Yes. Sign me up."

Sparlin's Troilus is, by the nature of its generating spark, a very produced and very directed show. "There were some people who didn't try out," she acknowledges, because they wanted a different kind of experience, a less controlled one. "It's not a character-development Shakespeare at all. We also have guns, everyone has a gun, and that was something I had to tell people, you have to be comfortable handling a gun, and firing it, and pointing it at an audience member at point blank range." Carie Esquenazi, a new iron belly muses member and a regular performer with the improv troupe We Could Be Heroes, can only say good things about Sparlin.

"What a great experience to be able to work with a director who has such a clear direction; a company who has such a positive and progressive ambition. I think that Rebecca and Sharon are two of the coolest, strongest women I know." Esquenazi will be house managing Troilus. Her background in comedy comes out when she says, "I'm so excited to work on this first production for the muses that I could just pee." Well. There are control issues, and then there are control issues.

What can't Sharon Sparlin do? "I can't direct a character-driven serious piece. I have no clue how to do that. Or at least I haven't tried to do it yet. A three-person intense drama would be much more frightening to me. I'd have to take a Sarah Richardson 101," she says, referring to the esteemed member of the Rude Mechanicals troupe who directed acclaimed productions of Shakespeare's R&J and Pride's Crossing for the Zachary Scott Theatre Center. She has her own heroes, like the Rude Mechs, and she thinks that Dan Dietz, of Salvage Vanguard, "is a god." Why hasn't she worked with SVT, or done the Rude Mechs training? "I have a 10 o'clock meeting every Saturday morning for iron belly muses." Wait. What happened to doing nothing until noon? "Well," she says matter-of-factly. "That went out the window."

Troilus and Cressida runs through April 14 at The Blue Theater. Call 454-TIXS for info.