Playwright Kirk Lynn confirms it: "He got his Fosse reputation from WAR," Lynn's self-directed play, produced for the Rude Mechs last year. Responding to a note to make the scene "fancy," Fisher danced his way through it ô la not only Fosse, but also Fred Astaire. "He's one of those wonderfully professional people wrapped in a hip indie package: always on time, first with his lines, and willing to try any idea, no matter how shabby the director," Lynn says with a barb at his own directorial work. WAR was a dense, multimedia fantasy about personal and professional battlegrounds, but, Lynn says, "it could have been a whole 'nother thang if we had let Fisher loose to make it fancy."

Lynn has no shortage of praise for Fisher. "He's also a tough son of a bitch when it comes to aiding and abetting: He always comes to volunteer days, once placing himself in the center of a fiberglass plenum as he helped us install the Off Center's duct work."

Robert "Fosse" Fisher responds with characteristic modesty. "It's always play," he says. "If I sit still for too long, I go crazy."

Fisher was raised on perpetual motion. His family moved around a lot. He graduated from high school in Houston, then got his BFA from the University of Southern Mississippi.

"I could never really describe for you an acting process or something like that," he says. "Things like Stanislavski method acting, things like that. That was a class I never went to." He sighs. College, you know. "There's just this point that you get to in every program," he says. He broke out of the college conservatory machine. He joined a band. He joined several. He played with the Bigamy Sisters in Austin (alongside Rude Mech Robert Pierson) until the lead singer moved to Paris.

"Rock & roll is it. I like rock & roll. I'm a rock & roller, I guess." And in fact, he plays virtually any musical instrument he can get his hands on: guitar, piano, drums, ... you name it. There's a definite overlap for him between music and theatre: Acting, for him, is about crafting the song.

After arriving in Austin in 1997, he got a call from Joey Hood, a college buddy who had remained behind. "He called me up," Fisher says, "he was like, 'Get me out of here.'" Fisher fetched him. They looked around, young, curious, energetic, and saw that a company was holding auditions for a production of Tom Stoppard's play Arcadia. "Each of us saw the notice in the Chronicle," Hood recalls. "I called him up, I was like, 'Guess what,' and he said, 'Yeah, I know. I saw it.'" They auditioned and got cast.

Now neither of them has to look in the paper. "I've gotten in the really bad habit," Fisher notes wryly, "of calling directors up and going, 'Hey can I come to your callbacks?'" Chorus: You cannot be in line and be in rock & roll.

"Robert is one of the most fearless actors I've ever worked with," says Subterranean Theatre Company Artistic Director Ken Webster. "He doesn't have a big ego, either. He's interested in participating in challenging projects, no matter what the size of the role might be. I really love working with him."

Don't even get Fisher started on Webster.

"When I met Ken, he always struck me as a very odd person" Fisher says. "He always spoke to me like thissssss ..." Fisher mimics Webster's deep voice. "How're you doin', Ken Webstah ..." But, Fisher says, "Like any theatre community, Austin has its giants, people you look up to, make you want to stick around. Okay, I want to be in the Ken Webster show. I want to work with Ken Webster. He's the man."

Fisher has worked with a variety of directors now: Norman Blumensaadt on Arcadia, David Jones on Travels With My Aunt, Lowell Bartholomee on the FronteraFest Best of the Fest piece Hill of Beans. He likes having fun. He likes that variety. He's like the ultimate session player that everyone wants to be on the album. But there are three companies in town with which Fisher specifically identifies: The Public Domain, Subterranean, and the Rude Mechs.

"They push things," he notes. "They're all very distinct. Public Domain, they're very story-driven. Subterranean focuses more on character. Rude Mechs kind of focus on environment. They bring all of those out, each one just has a different focus. Robi [Polgar, Public Domain artistic director and Chronicle contributor] is really good at the use of space. The Possibilities was a really hard show. Just mentally. It was a very tense show. Either really tense or just the opposite backstage." He screams as an example of the opposite. 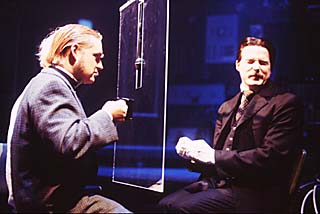 Robert S. Fisher, as Thomas Edison, with Michael Miller as Tesla in Requiem for Tesla (Photo By Bret Brookshire)

"Shawn Sides. She's amazing. She's really good at steering everybody where they want to go, so that everybody's doing their own thing, but it's going where it needs to. I guess all the Rude Mechs do that -- play. They leave the actor to their substance." Fisher was recently asked to join the company. So far, the actor has maintained a quiet, insider's presence, probably because, as Webster has put it, "He is very economical."

But his performance as a harlequin-like combination of Mark Twain and Thomas Edison in the Rude Mechanicals' just-closed production, Requiem for Tesla, pretty much blows that gig. Split down the middle, a black suit and slicked-down hair for Edison and a white suit, mustache, and frizzy mane for Twain, he locks his jaw onto the Rude Mechs' use of spectacle and gives it a glorious bulldog shake. As Kirk Lynn says, "So much work in this town and so much of it good, it's little wonder that wonders get overlooked. And I do think Robert Fisher is a wonder."

And then it starts to add up. In the Chronicle review of Travels With My Aunt, Robi Polgar wrote, "Among the more memorable [performances] are Robert S. Fisher's Wordsworth, a black cinema doorman rescued by Aunt Augusta and now her exotic love-slave who seems to turn up at the strangest of times." And for the Subterranean production of A Soldier Dreams, Polgar observed that Fisher "exploits every detail." In her 1998 review of Arcadia, former Chron writer Adrienne Martini wrote that "special praise must be lofted toward Robert S. Fisher for his dual performance as two characters who seem to know a lot more than they let on."

Arcadia's director, Norman Blumensaadt, says that "Robert read a bazillion things very well, and it was difficult figuring out where to put him." So he gave Fisher a role with no lines. His other character was in one scene. But the silent parts sometimes require more effort than the speaking parts. They have to be filled physically, attentively, subtextually. For that kind of role, Blumensaadt says, you need an actor, someone who can inhabit the role, ride the bike without training wheels. It was rather an astonishing coup for the new guy in town.

Of his own work, Fisher says, "I've been doing a lot of comedy, which is really strange to me because I feel like that's the poorest thing I do." No, really. He's not being sarcastic. "I've never been satisfied myself with my performance in a comedy. I feel more comfortable, stronger in a serious role."

He leans forward and says earnestly, "I would love to do a Mamet piece with Ron Berry."

"He's so funny, he's so all over the place, but he can be that, you know, just kind of close down and have a lot of stillness to him." It's actually a really provocative idea. But then, Fisher is becoming known for putting two and two together to make five.

Joey Hood calls Fisher an "artistic mad scientist." Part of the reason he's been mostly under the radar is that he takes over a part, does it, and moves on. Fisher's technique is the idealistic subversiveness of real-time rock & roll. Along with good acting and beautiful stage pictures, Hood says that they both appreciate production music -- preferably live. The kind that makes your spine tingle. "He's always been a Tom Waits fan. He sort of got me into it, too. We were all about heartbreak, bleeding for the art." Are they still? "Yeah. Pretty much."

About music, Fisher becomes evangelical: "Music is the poetry of our day. It's more accessible than people sitting down and reading. I have an obsessive behavior about the band Guided by Voices. Elvis Costello. I love pop music. At the same time, Johnny Cash is the god of country music; you can't survive without your Johnny Cash and your Hank Williams albums. You have your Miles Davis and John Coltrane albums, and you have to have your albums that are just that weird series of blips over and over again, you listen to it trying to figure out what are these guys trying to say to me, as an audience member?"

Fisher continually challenges expectations, continually works to find a new sound. "In all truth, I don't really know why I do this stuff other than that I don't know how to do anything else. I don't get enough sleep, I smoke too much, consume too much caffeine and sugar, work a day job to make money, and at night -- either alone or with a group of people -- throw 110% into a process of creation ... blah, blah, blah. I'm sure most actors you talk to would say something similar. It's hard to talk about the psychology of 'artists' and 'why' without sounding like you're full of shit. Maybe it's survival, or escape, or an outlet, none of the above, all of the above, or just that it's so fucking cool. My life is filled with rock & roll stars -- crazy, emotional, creative people who build, destroy, and rebuild themselves and their work every moment. Why would I want to lead a different life? Didn't everyone want to be an Ace Frehley, Buddy Holly, or Lou Reed when they grew up? I work with them every day. And sometimes, it makes me feel like one too."