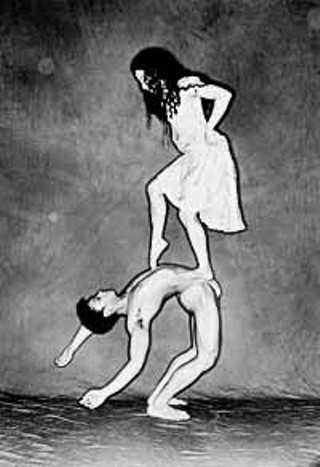 When Pilobolus coalesced out of deep space to become the most exciting word in American dance, Richard M. Nixon was in his first term, Vietnam was still sending American visitors home in boxes, A Chorus Line and Cats were still years from prancing across Broadway, and the Armadillo World Headquarters had just opened.

Pilobolus were a handful of Dartmouth College stoners cavorting around in aviator goggles and ill-fitting leotards, injury-prone Ivy League athletes taking a modern dance class for all the right reasons: easy credits, and the teacher was pure chone. In 1971 they gave their first public performance, a surprise 15-minute opening gig before a Frank Zappa show at UMass-Amherst.

It's narcotic, this realization that strangers will pay you good money to have your fun onstage in front of them. And these guys were hooked.

They were a band with no instruments, sophisticated slackers who formed a sort of commune, and their mission was never to have jobs. They parlayed the Zappa gig's contacts into a string of giddy barnstorming performances around New England that quickly caught the attention of, like, everybody. I first encountered them at an outdoor performance in Radcliffe Yard in Cambridge in the middle of the day. A year later, they were the hottest ticket in the history of Harvard's Loeb Drama Center.

By 1974, after a few personnel changes, Pilobolus congealed as a six-person entourage: the four Dartmouth dudes -- Jonathan Wolken, Robbie Barnett, Michael Tracy, and Moses Pendleton -- and their by-then ex-teacher Alison Chase and Martha Clarke, who was, uh, ... a real modern dancer. The group was also blessed with David Chapman, their indefatigable, brilliant, modest tech director, keeper of anything valuable, and the only New Yorker of the lot. Simply by following their own instincts, Pilobolus developed an audaciously original choreographic language that owed everything to sport rather than dance traditions. They didn't have a choice, really, since existing dance vocabularies meant nothing to them. They'd never seen them. They didn't know the difference between a pair of pliés and a pair of pliers. They showed up to take a class at a studio in NYC once wearing their dance belts outside their leotards, which were really cross-country skiing tights.

They lived and worked together, eventually moving to an idyllic rural enclave in Northwest Connecticut called Washington Depot. (Yes, the real George W. slept there.) Before they really knew what was going on, Pilobolus had invitations to perform all over the United States, commissions for new work from the American Dance Festival, specials on the PBS series Dance in America, and books being written about them.

Pilobolus debuted on Broadway in 1977, produced there by Pierre Cardin, who had already made the company the toast of Paris. In reviews of the company's work, Anna Kisselgoff, dance critic for The New York Times, and Arlene Croce, writing for The New Yorker, threw the word "genius" back and forth like a Frisbee. Between 1977 and '80, the troupe circled the planet four times on tour. In December 1981, they returned to Broadway.

Without a single grant from the National Endowment for the Arts, without a "director," without a plan, and pretty much without a care, these people reinvented dance theatre. Or rather dance and theatre. What they invented was Pilobolus. Drawing from an initial repertory of about 20 solos, duets, and full group pieces, the Seventies Pilobolus show typically consisted of six to eight pieces, sewn together with an awesome, non-academic mastery of lighting, pacing, sound, and purpose. Works such as Untitled, Shizen, and Monkshood's Farewell defined the Pilobolus aesthetic which, in their own words, was known as "superior visual mind-fucking." But all they talked about was "good theatre" and "the energy circus."

You can't talk about Pilobolus without talking about the N word. In any other group's hands, the nude men in Untitled would have looked silly, but Pilobolus used nudity as if they invented it, as if people had never been naked before. And its impact was such that even when they were in unitards, Pilobolus looked nude. But it was nudity you could easily let your kids watch. They still caught shit for it in some states, some countries. Presenters often imposed "NN" status on a show: no nudity. Pilobolus just charged higher fees for NNs. Fuck 'em.

Two watershed events occurred shortly after the group's headline-making gig at the 1980 Winter Olympics in Lake Placid, New York. The first was that Clarke and Barnett split off a separate group called Crow's Nest, Pendleton formed MOMIX -- the only dance company ever to give Pilobolus a run for their money -- and Pilobolus had to hire new performers. (MOMIX just spent most of January selling out their three-week 20th anniversary gig at the Joyce in NYC.) The second was "Day 2." The need to hire was a wrenching coming-of-age for a group in their early 30s. Until they proved themselves, newcomers were called clones. Maybe it was just the coincidence of having the Rolling Stones as neighbors in Washington Depot, but the clones often felt like they were being asked to be Mick Jagger's stand-in, then his permanent replacement. No one knew if it would work.

It was June, 1981. Reagan was in power. The original Pils and the first five clones were home in the Depot for the month to make a new piece commissioned by Charley Reinhart at the ADF in Durham, North Carolina. If the American Dance Festival were the American Rock Festival, the commission to Pilobolus was the equivalent of having a presenter call Joe Ely and say, "We'll book you for five shows next month, here's $65,000 up front, we pay air and hotel, and, oh yeah, all new songs, if you don't mind." Pilobolus did this every summer. They thought it was normal.

In the group's newly instituted administration, a leap out of the old communal process, this commission fell to the group's co-founder Moses Pendleton. On the first day officially given over to the creation process, everyone crowded into Mo's carriage house studio on the grounds of his 22-room Victorian mansion (for which he was paying a couple hundred bucks a months because it was an uninsulated "summer cottage") and flailed away in earnest. Pointlessly. Creating on a schedule wasn't in their system. But on Day 2, American modern dance changed forever in a thunderstorm.

After an overnight fast, there was an early morning gathering in Mo's kitchen to share a pot of mushroom tea. Someone in Oregon had sent a teddy bear to the Depot by mail. It had a hundred caps of 'shroom inside. The tea hit just as a hill-shaking summer thunder-roller swept over the Berkshire foothills. The storm started with an hour of spectacular, unending lightning, instant thunder, and driving raindrops a half-inch in diameter. The tea was stronger than peyote, sweetened with Vermont maple sugar.

Framed in a box-hedge courtyard of grass smooth as a golf green, a ritual evolved that seemed to leap right off Sumerian or Egyptian or Roman ceramic pictograms. A bolt of lightning hit so close to Pendleton while he was kneeling on the ground that his wild hair stood on end and he levitated for several seconds. The rain continued for nearly five hours. So did the dancing.

The entire time, Pendleton, Tracy, Danny Ezralow, Jamey Hampton, Cynthia Quinn, Carol Parker, Rob Faust, Peter Pucci, and, oddly enough, Humbert Camerlo, an official from the Paris Opera, were out of their minds, out of their bodies, out of this world. (Okay, I was there, too.) The day's soundtrack, reverberating throughout the house and grounds, was Brian Eno's Another Green World, Talking Heads' Remain in Light, and Eno and David Byrne's My Life in the Bush of Ghosts. On vinyl, thank you, over a vintage Macintosh-amped KLH turntable and Bose speakers in a four-story, 15,000-square-foot wooden house with 12-foot ceilings. A house in motion. The house was on 'shrooms. The house was a Bose speaker. The sun came out in early afternoon. Naked, nonverbal, muddy, coming back around, everyone gravitated to Mo's vegetable garden to forage. When evening came, they moved to the studio and spent nearly 12 hours straight recreating the morning's memories with a video camera rolling.

After two weeks of editing, refining, negotiating rights with Eno and Talking Heads, and a quick decision in costuming (identical dance belts only, for four men and two women), Day 2 was finished. From its first performance a month later in Durham, it has blown the roof off every theatre it's ever been performed in. And it's as powerful now as it was 191é2 years ago. Maybe more so.

By 1982, five of the six original Pils had replaced themselves with younger dancer/ athletes and taken up more mature roles as directors. MOMIX and Pilobolus were sharing dancers, symbiotically building on each other's success.

They had also left behind all the parallels to rock bands. There is no equivalent in contemporary music for the Pilobolus family tree and its collective impact on the present and future of an art form. Bands evolve from each other and each other's influence. Pilobolus evolved and continues to evolve from itself. What they do can't be taught.

Through the rest of the Eighties and Nineties, Pilobolus grew through a couple of generations of new dancers, all of whom came up through nearly unbearable expectations imposed by the history of a group that's been a legend since its very first performance. There must be 45 to 50 artists now who can claim alumni fungi status. And as Pilobolus kicks off their unthinkable 30th anniversary shows, they're touring more than ever and continue to be the most unpretentious, dazzling, original, exhilarating, popular, daring, athletic, libido-wrenching dance mothers on Earth.

With nearly 100 works in their rep now, a show may contain pieces created nearly three decades apart. And you can't tell. That says it all. Not bad for a bunch of freaks from Vermont who named themselves after a manure-eating fungus. (And what this 30th anniversary begs for is a reunion onstage, somewhere, anywhere, of the six people who originally made Pilobolus a word that the world wanted to know the definition of. If I were an e-business millionaire, I'd spend whatever it took to produce that show at the Paramount.)

'Shroom on with Pilobolus at the Paramount this week. And when the lights go down, say goodbye to Austin. Wrap yourself in wonder. Take your clothes off if you want. Pilobolus won't mind.

Sometimes a cliché says it best: It doesn't get any better than this. Well, some nights MOMIX is better. But without Pilobolus, that word wouldn't exist. Without Pilobolus, a lot of things wouldn't exist. Like hope for theatre. Like dance you can sink your teeth into. You don't just leap out of your seat at a Pilobolus curtain call. They pull you out of your seat by the back of your head and kiss you 'til you're slippery.

John Job worked with Pilobolus and MOMIX from 1980-85. After that, he moved to Austin, where he has worked every concert venue in town at one time or another. In the past two years, he has written eight books of children's rhymes. 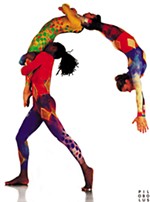 Pilobolus
The fungus still among us