Rounding Up the 2001 FronteraFest Long Fringe 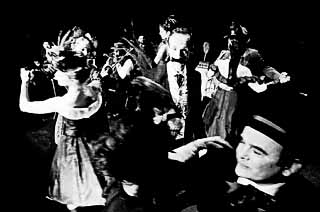 by Tongue and Groove Theatre

Opinions, they say, are like assholes: Everybody has one. The value of an opinion may vary, of course, depending on the opiner's knowledge of the subject, the consideration and effort brought to bear in relating that opinion, and so on. Suprisingly, perhaps, the same can be true of assholes -- as we learn with the story of Joseph Pujol, aka Le Petomane, an entertainer whose singular talent was the control he wielded over both his intestinal tract and his rectal sphincter.

Go ahead, say it aloud to yourself: rectal sphincter. This man Pujol, who was the most popular performer in turn-of-the-century Paris, could exercise his dorsal cavity the way Mozart could exercise a keyboard. Recognizable tunes, animal sounds, vocal impressions, almost Joycean thunders: All these and more were within range of this so-called fartiste. Listen: This guy could puff Gauloises through his bunghole!

If you're intrigued enough to desire specifics, you could read Pujol's biography as penned by Jean Nohain and Francois Caradec. Or you could witness a delightful, rousing, live-action rendition of that very bio from the Tongue and Groove Theatre.

You recall how Austin's Rude Mechanicals took Greil Marcus' Lipstick Traces and turned it into a riveting spectacle of edutainment? These Tongue-and-Groovers pull off the same vibrant sort of caper, outfitting the tale of Pujol's tail with a live jazz combo as if snatched from the famed Hot Club, with a chorus of the kind of dancing girls that put the "oo" in the "oo-la-la," with a stageful of talented performers mangling Le Accent Francaise and chewing fin-de-siècle scenery as if it were so many portions of escargot.

David Yeakle's adroit adaptation of the bio's text is cleverly presented and interspersed with high-kicking dance numbers and pantomimed songs, with that sweet cadre of musicians serving up compositions by Yeakle, Ian Case, and Jonathan Hoyle. (And, sacre bleu!, the period-specific costumes gathered by Kari Perkins! Mon cheri, you'll want to point-and-click half these duds into your shopping cart, tout de suite!) Taylor Maddux portrays the amiable and determined Pujol, and the band, bless them, provides the many appropriate sound effects. There was much applause throughout this exuberant show, and that, too, was appropriate: It's a highly enjoyable 45 minutes of theatre, and one which, we're told, will be expanded -- not unlike certain portions of Pujol's anatomy -- into a full-length production later in 2001. We'll be waiting for it, bottle of absinthe in hand, eyes lingering upon a portrait or two by Toulouse-Lautrec, because it's well worth waiting for. Although, yeah, that's just my opinion talking. (Friday, Feb. 2, 6pm; Saturday, Feb. 3, 6:15pm)