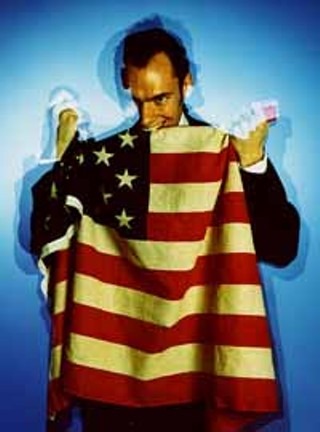 Top 10 Most Memorable Bits of Theatre in Austin 2000

1. The moment when the clever wordplay of Hank Schwemmer's The Oracle Game shifted into the murderously demonic. There was a mountain of good work at last year's FronteraFest; this was its dark, shimmering pinnacle.

2. The point at which, during one of the frenzied spittle-expelling rants in the production of Mac Wellman's Terminal Hip (Salvage Vanguard Theater), Dan Dietz's face moved into its deepest shade of crimson. You know a fellow can act when he comes across as gut-level sincere even while spouting an hour of pure nonsense.

3. Each suddenly still tableau of actors in the full cast freeze-frame opening of Kirk Lynn's WAR (Rude Mechanicals). You could almost picture the hands of Ray Harryhausen lowering to rearrange the halted figures in this spectacular prelude to the otherwise at least mildly disappointing presentation.

4. The eternity of about 10 seconds that stretched between the amplified sound of first one wrist breaking ... and then the other, in the production of Cyndi Williams' Fish (Aunt Lulu Plays). Highly effective, a most excellent bit of foley, and I don't want to hear anything like it ever again, thank you.

5. In the staging of Patrick Marber's Closer (Zachary Scott Theatre Center), the moment when the two male leads -- engaging in a little anonymous (and transgendered) cybersex -- decided to move the tryst into meatspace. It was a completely nefarious ruse of seduction, perpetrated gleefully, the audience was hip to what the more hapless character mistook, and Paul Norton and Michael Miller brought the scene perfectly to life.

6. The subtle hinge where Kirk Smith's sweeping-the-floor became Kirk Smith's dancing-with-a-broom, in the production of that playwright's Despair's Book of Dreams and the Sometimes Radio (VORTEX Repertory Company). It wasn't a new thing at all, of course; but the way Smith flowed into it, you knew his character was innocent of all prior knowledge but dancing's joy.

7. The point at which Katherine Catmull's smile shaded toward incandescently smug self-satisfaction, after her necrophiliac character's rejoinder of "I am" near the end of Body and Soul (Subterranean Theatre Company). It almost makes us non-corpse-fuckers wonder what we're missing...

8. Steven Tomlinson's graceful attempt to deal with a recalcitrant prop in his otherwise flawless Curb Appeal (Frontera@HydePark Theatre). Such a minor accident, and such an elegant compensation, in a major triumph of writing and performance.

9. The second time that Ron Berry, making like a freaky scenester in Jennifer Haley's The Butcher's Daughter (Refraction Arts), said "Rub-a-dub-dubby" with such an insistent and perverted tone that I nearly choked from laughing.

10. The puppet in The Butcher's Daughter (Refraction Arts): It was twice the size of Andre the Giant, it glowed in the dark, it was manipulated by three separate actors, and it came from outta nowhere and scared the bejesus out of every man, woman, and child in the theatre.

The moment of realization, during the final bit of this year's Best Salvage Vanguard Holiday Ever (Salvage Vanguard Theater), that, duh, Kirk Lynn can still achieve sheer brilliance.