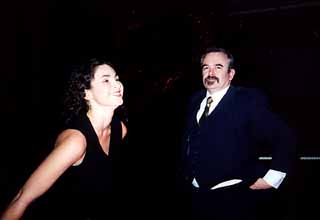 The Lover, a Harold Pinter drama upstairs at The Hideout, is a turn-on. Directing an affair staged jointly by ONE Theatre Company and the dance troupe Footesteps, Daniel Lam imbues The Lover with passion. Actors Kregg Foote and Jamie McNatt can be proud of their performances in this play for two; they sustain their intimacy with admirable stamina.

In Pinter's take on Boogie Nights, Sarah (McNatt) shares amorous details of her extramarital relations with her husband, Richard (Foote). Subsequent exchanges re-light fireworks in a marriage based on an accountancy job and children at boarding school. Circling each other like cat and tom, McNatt and Foote hiss and purr lines trembling with sexual reference. Words, so often superfluous, make the games between husband and wife, wife and lover, more piquant. The duo arch eyebrows at tart comments and speak with lip-licking deliberation.

By avoiding traditional jealousy signs, Pinter's script examines the reality of role-playing games in human relationships. Through years of cohabitation, all their life enters the game. Richard kisses Sarah on the forehead before going to work to see if she will ask for a kiss on the lips. Sarah doesn't ask this time, to see if Richard will notice. Taking a lover becomes just another role for both to play off. Pinter lulls the spectator into making quick judgments about these characters and their treatment of each other: They act so cold, they are superficial, they hate each other. Later, the writer wipes the floor with these judgments. Who doesn't play games in love? Who can say how love looks? If dance can be communication, can an argument be a kind of dance?

Foote stomps onstage and, with the footwork of a matador, sheds the character of Richard and transforms into Max, Sarah's hot-blooded lover. By shedding the three-piece suit and the stiff carriage, Foote succeeds in creating a new personality. Guitarist Andy Sigler and percussionist Jason Lehmberg give in to the balmy evening and start the tango. Foote and McNatt cut loose their passion, expressing themselves with more of their bodies than conventional theatre allows. No playwright could come up with a love scene as inspiring as the tango. Tossing her head back, McNatt abandons her balance. Together they turn, then snap apart. Drawing closer, they match each other with furious motions until they settle side by side again. This dance of emotions is the most convincing display of sexuality available to the voyeur outside Swedish film studios.

Lighting creates the mood; with a tinge of red, designer Zach Murphy turns a homely lamp in The Hideout into a love shack lantern. Flavored music from Lehmberg and Sigler gives the proceedings rhythm. Even the props are right; director Lam knows just how to use theatre's most provocative sex-toy, the screen.

As foreplay, The Lover works exquisitely, a balance of music, sweet lines, and sensuality. But the finale is abrupt. Instead of afterglow, there is a feeling at the end that the audience has missed the main act. One member even looks around, unsure whether it is all over. All parties to this affair could not be satisfied in a single hour. ONE Theatre Company and Footesteps owe it to each other to probe further the themes of love, marriage, sex, and the games they entail.