Who Wants to Be a Theatre Geek?

How Much Do You Know About Austin Theatre? 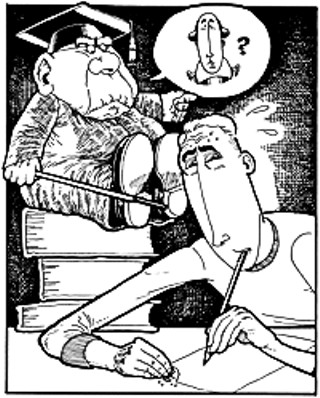 Okay, class, if you think I've been spouting off here, week after week, just to hear myself talk, you've got another think coming. It's time to find out who's been paying attention, and in honor of the upcoming semester finals, we're going to have a little pop quiz. So put down that remote and pick up a sharpened No. 2 pencil. Answers are provided, but no peeking!

2. On average, what fraction of the plays produced per year are locally generated, i.e., written by Austin playwrights or commissioned by Austin theatre companies?
a. One-sixth
b. Two-sevenths
c. Three-eighths
d. Four-ninths

3. Speaking of Austin playwrights, to experience poetically charged sagas of people of color and women lovin' women, you should go to a show written by ...
a. Sharon Bridgforth
b. C. Denby Swanson
c. Joni L. Jones
d. Emily Ball Cicchini

4. When he isn't spinning fascinating monologues relating managed care and millennium bugs to our emotional and spiritual well-being, playwright-performer Steven Tomlinson is ...?
a. A social worker
b. An economics lecturer
c. A firefighter
d. A Unitarian minister

5. The Austin Circle of Theatres named their awards after him, so who was B. Iden Payne?
a. Longtime critic for the Austin American-Statesman
b. Shakespearean scholar and director
c. Founder of UT's Curtain Club
d. First artistic director for an Austin theatre company

6. As long as we've mentioned Shakespeare ... It turns out that the Bard of Avon is Austin's favorite playwright -- or at least he gets more of his plays produced locally than any other dramatist. So which of his plays has been produced the most times locally during the past seven years?
a. Macbeth
b. Twelfth Night
c. A Midsummer Night's Dream
d. Romeo and Juliet

7. So if the Bard is tops, who is Austin's second favorite playwright (by virtue of the most local productions of that writer's plays)?
a. Harold Pinter
b. Stephen Sondheim
c. Neil Simon
d. Sam Shepard

8. Before it was the Paramount, the Paramount Theatre was named what?
a. The Majestic
b. The Royale
c. The Capitol
d. The Lyric

9. Before it was the Zachary Scott Theatre Center, Zach was named what?
a. Little Theatre of Austin
b. Austin Community Players
c. Capitol City Playhouse
d. Austin Civic Theatre

10. And speaking of Zach, which of these Zach shows holds the record for longest-running production?
a. Beehive
b. Shear Madness
c. Dreamgirls
d. Sylvia

12. And which of the following Subterranean Theater Company shows has artistic director Ken Webster not revived (yet)?
a. Bleacher Bums
b. The Homecoming
c. Sin
d. Edmond

16. Which of the following Austin shows that were presented outside of the city was the only one to go someplace other than New York City?
a. Dirigible
b. Lipstick Traces
c. Millennium Bug
d. Werner Herzog's Strozsek

18. Esther's Follies, which has been going strong on Sixth Street since before even Tuna got started, lost its first location to ...?
a. Eviction by offended landlord
b. Memorial Day flood
c. Fire
d. Pestilence

19. Which of the following performance spaces did not debut in the last year?
a. The Off Center
b. Blue Theatre
c. The Hideout
d. Bad Dog Comedy Theater

2. d. Four-ninths. From September, 1999 through August, 2000, 92 of the 206 plays mounted locally were original works created for Austin stage companies.

4. b. An economics lecturer. Tomlinson, whose most recent work Curb Appeal returns to Hyde Park Theatre for a brief run in mid-December, lectures in the Department of Finance at UT's Red McCombs School of Business.

5. b. Shakespearean scholar and director. The esteemed Dr. Payne established himself in his native England around the turn of the century, then came to the U.S. just before World War I. He was a guest professor in the UT Drama Department from 1946 to 1973.

6. c. A Midsummer Night's Dream. It's been staged 11 separate times since 1994, three times this year alone. If you haven't seen it by now, it's nobody's fault but your own.

7. c. Neil Simon. The author of California Suite has had at least 11 productions of his plays, including two separate productions of that play, staged locally in the past seven years. Mssrs. Sondheim and Pinter have had nine productions each during the same period. Mr. Shepard, whose work has been so in vogue this year, has had but seven productions over that time.

8. a. From its opening in 1915 to its remodeling in 1930, the vaudeville house on Congress was called the Majestic.

9. b. The organization we now know as Zach got started at Austin Civic Theatre back in 1933, making it Texas' oldest resident theatre.

11. d. Cervantes/Don Quixote. York, who seems to have covered just about every role in American theatre, male, female, and in-between, has yet to play the Man of La Mancha.

12. c. Though he's taken second cracks at Pinter's Homecoming and Mamet's Edmond and is it four cracks now at the Organic Company's Bums, he has yet to remount Wendy MacLeod's Sin. But he should.

14. a. In 1999, Jason Neulander was profiled by former Chronicle scribe Adrienne Martini as part of a section on up-and-coming American theatre artists under 30.

15. b. Vicky Boone and playwright David Hancock went to Sundance in 1999 to develop Hancock's play The Invisible Medium. A portion of that play, titled Ordering Seconds, was recently given a staged reading at Hyde Park Theatre.

16. c. Steven Tomlinson got to do his Millennium Bug for a private group on the West Coast.

18. c. A fire in 1983 forced the Follies to move to the Ritz. The troupe, now celebrating its 24th year, is currently in its fourth location.

19. a. The Off Center opened just a tad earlier than its theatrical brethren, back in 1999.

20. c. According to a 1998 poll, about two out of every three people in our area have been to the theatre at some time or another.