Private History of a Campaign that Failed 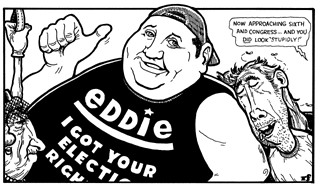 Running for president seemed like a can't-miss idea. I figured if a joyless old crank like Nader could score 5% of the vote, a righteous party daddy like myself ought to be able to score 10 times as much! And that's a two-thirds majority, right? (By Robert Faires)

What the hell was I thinking running for president? I can only compare it to the feeling that someone has when they wake up hung over and freshly tattooed from the night before. The only problem is this tattoo can't be covered by a long shirt sleeve. Nope. This one is in the middle of my forehead and it reads, "Jack of the Ass!"

When I first thought about throwing my ball cap into the political arena last week, it seemed like a can't-miss idea. I did the math. I mean, I figured if a joyless old crank like Nader could score 5% of the vote, a righteous party daddy like myself ought to be able to score 10 times as much! And that's a two-thirds majority, right? Then that night I sucked down a Sam's Club 40 oz. bottle of NyQuil and God spoke to me in a vision -- telling me to open a can of serious whoop-ass on those candypants Gore and Bush -- and I figured I was a shoo-in. Sure, I only had seven days to get my message out, but hey, I had the Big Guy on my side. He made the frickin' world in less time.

I imagined how fun running for president would be. I would get to talk about things that are vitally important to the future of this great country of ours. Like the removal of pandas from all federally funded zoos. And putting limits on the midget vote. (Two midgets, one vote.) And most important of all, challenging Hollywood to stop any project attached to Tony Danza. Sweet Lord in heaven, how many times must America say NO?!

But I quickly realized that my campaign to be your commando-in-chief would not be fun. I learned that these pressing concerns are not what the liberal media and the Washington insiders wanted to talk about. Nope. They'd rather waste our time with discussions of such supposedly "serious" issues as seniors, prescription drugs, health care, social security, and military readiness.

Well, fine. I played by their rules. I talked about seniors. I told them I think it's dangerous to label a group by a vague term like that. I said let's call them what they are: "oldies." I made it clear that I am for old people. Just last week I was taking a Southwest Airlines flight and wishing I had an old person in my carry-on so I could produce it and pre-board. I talked about prescription drugs. I said I was against them in all forms. I think we should look to the back alleys of America for our drugs. America has some of the best drug dealers in the world -- Mom-and-Pop-type drug dealers. I said let's support them, the local drug dealers who live in our communities, not the corporate-owned prescription drug tanks of Flintstone vitamins and such. I told them that I am opposed to national health care; however, I support having someone chew my food before I ingest it. I told them that I think social security should be replaced with a national bake sale or car-wash-type thing, and the only way an "oldie" can receive funds is if he or she works a booth. No more sitting on your old asses collecting checks. That's what I do.

I even talked about the military, giving the pundits the perfect solution to all our defense problems: Balloons, and plenty of 'em. Who's our biggest enemy in this new brave new world? The Chinese. Well, my fellow Americans, remember when every billionaire in the country was attempting to be the first Willy Wonka to loop the world in a hot air balloon and how nervous the Chinese were about allowing balloons to cross their airspace? Clearly, the Chinese are terrified of balloons. If elected, I would have defeated the Chinese the moment I got in office with a strategic hot air balloon deployment that would have made both Mr. Macy and Mr. Gimble proud.

KVUE allowed me airtime to spread my message, and I thought it went really swell. But I was later informed by people close to me (on the bus) that I looked "stupidly." After telling that cheap tramp to pipe down and then trying to hold a forum of open discussion on the issue of whether I looked "stupidly" or not, I was forcibly removed from the bus. (Thanks a heap, Capital Metro! See if I ever vote any more big buckolas for you!!)

After that, the whole campaign seemed to fall to pieces. Judy Maggio stopped returning my phone calls. Neal Spelce issued a restraining order on me. Sandra "Miss Congenitalality" Bullock turned me down flat when I invited her to be my running mate (although I did get Leanna Holmquist of the Dudley & Bob show to agree to be my Minister of Hot Ass!). Who was responsible for my campaign falling completely into the toilet? Like every good, self-respecting candidate, I blame others. I blame the major political parties, who stifle any independent voice for freedom, equality, and an XFL franchise in every town. I blame the close-minded, cliquish media, who aren't really interested in finding out who let the dogs out. Mostly, I blame my parents, who leaked sensitive information to those who would rather see me fail: the fact that I always sleep till two in the afternoon and would never be up in time to run the country at 8am. This information proved very damaging to me as it fueled a series of negative ads targeting me as a lazy homophobe who hid in the Texas National Guard to avoid Desert Storm. It was signed, "Paid for by the people who think Eddie is a dum-dum."

I'm not a dum-dum! Does this read like the message of a dum-dum? I don't think so, you stupid faces. I think it reads more like the thoughtful thoughts of a serious-thinking concerned citizen. But that doesn't matter anymore. As a result of the relentlessly under-handed attacks leveled at me by my opponents, I experienced severe gastrointesticle pains which forced me to withdraw from the presidential race. It has never been more true that quitting hurt me more than it did you.

In conclosing, I would like to thank every one of my supporters who have been with me during the entire long campaign this week. You rock. Both of you. And for the rest of you, I would remind you, the voter, the taxpayer, and the patriot, to demand the most of your elected officials, and if your guy didn't get into the White House this go-round, then it is your duty as an American to mock and harass the winner as if he were the devil himself.