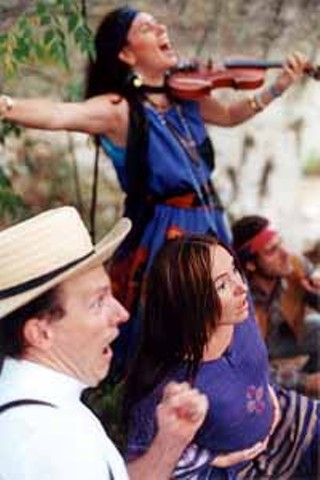 Cowboys Slim and Shadow arrive at the swamp-shack home of the pregnant Maria to protect her and her young son from the Beast, a genocidal bog monster. They do an altogether shoddy job of it, inviting into the ramshackle house a wounded, delirious preacher, well played for laughs by Taylor Maddux, and a devilish, fiddling swamp girl named Gris Gris, played with rock star fiendishness by the show's musical director, Darcie Deaville. Gris Gris comes bearing mushrooms (the beast bait); two of the party eat the cursed fungi and proceed to hallucinate for the duration of the show. Everyone then waits in various states of insanity and panic for the Beast to arrive. When it eventually materializes in all its two-headed glory, everyone goes completely and utterly nuts.

In case it's not evident, prolific playwright Sam Shepard wrote Back Bog Beast Bait in the late 1960s. As in the recently staged Cowboy Mouth, this creepy-crawly show involves a big monster and a lot of real trippy talk, plenty of sustained catharsis, and loads of pseudo-sensical babble. It had to have been really raw and fresh when first performed in 1971, but now (at least sober) the script has an awfully dated feel to it. Iron Butterfly's In-a-Gadda-Da-Vida comes to mind; you have to be in the right mood (loopy?) or on the right drugs (peyote?) to enjoy it fully.

One suspects the older Shepard, author of monster-free shows such as True West, would be happy to let these early, kooky works go gently into that good night. Nevertheless, troupes like Tongue and Groove Theatre continue to pull them kicking and screaming from their would-be graves. Tongue and Groove's artistic director, David Yeakle, has imported this particular relic seemingly wholesale, but while its hallucinogenic clunkiness definitely feels old-fashioned, the look and feel of the production does indeed yield "a unified theatrical experience," à la Tongue and Groove's mission statement.

The set by Michael Stuart is incredible. Light filters through the shanty's slats. A fog machine pumps out sweet smog. Moss hangs from the ceiling. A recording of bird, grasshopper, and frog noises fills the Blue Theater. The well-costumed band comes through with a rousing bayou sound. Occasionally songs about the Lowlands emerge from a ghost girl puppet, sung sweetly by a veiled Rebecca Cannon.

Yeakle's direction is expertly physical, though some of his casting choices are mysterious. Aided by Bonnie Arnold's meticulous costume design, Marc English as Slim looks every bit the rough-and-ready cowboy, but his voice is strangely devoid of menace. Brian Yanish deftly portrays the sidekick Shadow, but he comes off as more intimidating than his superior, thereby undermining the power dynamic inherent in the dialogue. Poised Juliana Gilchrist is a bit far-fetched as Maria, the non-English-speaking peasant. But for all the absurdity of the script and all the problems wedging three-dimensional people into sketchy roles, the actors and musicians seem to be having a terrific time, conveying Shepard's tripped-out tale of the back bog beast with the highest of holiday spirits.