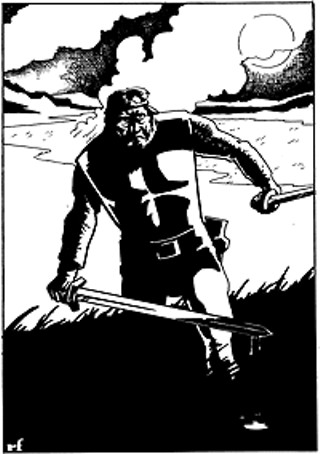 He's the Jason of classical drama. Like some Elizabethan ancestor to the ruthless killer of Camp Crystal Lake, he stalks the stage, leaving a trail of iambic pentameter and gore-splattered bodies in his wake. And though he is always dispatched at the end of his story, his popularity is such that he is perpetually rising from the dead to kill again and again. He is Macbeth, the Scottish lord who stabs his way to the top in William Shakespeare's shortest and most brutal tragedy, and despite this rather nasty penchant for murder most foul, he is an enormously popular guy. At least, it appears so if you look at the number of times he's shown up on the stage. Among the plays by the Bard most frequently produced, Macbeth ranks easily in the Top 10 and probably in the Top Five. Just in Austin, the play has been staged at least 11 times in the past 10 years, more times by far than any of the other great Shakespearean tragedies. In fact, for a full decade now, hardly a year has gone by without a production, and some years have boasted two or three productions. Clearly, this play holds some kind of fascination for us -- both the theatre people who keep insisting on doing it (and doing it despite a legendary curse that surrounds the play) and the audiences who keep turning out to see it. It is not simply a tale well told, though it certainly is; at just over 2,100 lines, it's among Shakespeare's leanest, sleekest works, and it races like a greyhound. But there is something else at work here, something in the darkness at the heart of the play, that creates a mystique around it. Its depiction of naked human lust and ambition is so primal, so elemental, that Macbeth the play becomes almost a living thing itself, a creature of the primeval dark that will claim us unless we take care to guard against it. That sense is definitely evident in the story of the play's curse (see "The Curse of the Play"), but it also seems to belong to that part of the play that is endlessly compelling to us.

This month sees two productions of Macbeth in Austin. Last week, the Disciples of Melpomene, a company headed by director Marshall Ryan Maresca, opened a version of the play in which women play all the leading roles. Next week, the State Theater Company will revive Guy Roberts' tightly distilled adaptation A Macbeth, originally presented during FronteraFest, at the State. In honor of these dual revivals and the Friday the 13th that falls between them, here is a closer look at the infamous cursed play with the directors of the current productions.

Austin Chronicle: Why do Macbeth yet again?

Marshall Ryan Maresca: Well, because it's such an outstanding work (which is why it is done so much). I've been wanting to do it for a few years now. When I was talking about doing it now, a few people said, "Well, they just did it at the Vortex," (though that was two years ago). But, you can't sit on your hands and wait for no one to have done it for a while. That'll never happen. Also, as a theatrical producer, you can't worry too much about what's been (or being) done. When we did Titus Andronicus, I thought we'd be completely safe, but then a few weeks before we opened, the Julie Taymor film opened in town. But that didn't hurt us at all.

Guy Roberts: You are right: Everyone does this play. Why does it collectively preoccupy us? I think the key is contamination. Macbeth contaminates us. From the first time you hear the witches say, "When shall we three meet again?" or hear Macbeth say my favorite line in the play, "Blood will have blood," we become infected. And just as Macbeth becomes infected and obsessed with becoming king, pleasing his wife, achieving the glory he thinks he deserves, we become infected and obsessed with watching him accomplish those goals. Obsession seems a good word to me in regard to this play. Olivier had an obsession with filming Macbeth, but he couldn't secure financing, and he long considered that to be one of his greatest failures. The play obsessed Trevor Nunn for five years; he directed it three times in three different productions over that five-year period because he couldn't get it right.

AC: What do you like best about the play?

Maresca: I love the whole aspect of curses disguised as blessings. It's a big theme in old Celtic stories (which was the source material for Shakespeare). The heroes would always have the gesa upon them, which was a mystical condition placed on their lives, usually involving their deaths. In the typical Celtic story, the death gesa was some bizarrely improbable or impossible situation, such as none of woman born can harm Macbeth. Inevitably, the hero interprets this as meaning that he is unstoppable, not realizing what he is being told is "This situation is coming up, and that is when you will die."

Roberts: The genius of Macbeth is that Shakespeare makes us, almost against our will, hope Macbeth will get away with it. I love that everyone who sees our production, from the dot-com millionaire to the junior high school kid dragged to the theatre by his English teacher, will intensely identify with this man who always wants what is just beyond his reach. And I love Macbeth's imagination.

AC:What do you think Shakespeare has done in this play particularly well to make it work?

Maresca: Well, for one, he really captured the gesa aspect of Celtic storytelling. Also, he's crafted something truly fascinating by using one of the few major stories in all of literature where the hero and villain are the same person.

The entire play, with the exception of the Hecate scenes (which aren't even Shakespeare's) and perhaps the England scene, are incredibly focused, much more so than any other tragedy. The world of the play is even more bizarre than that of Lear, especially given the Elizabethan preoccupation with all things concerning nature and the medieval idea of the great chain of being. Macbeth is dripping with religious fervor and Catholic guilt. And quite frankly that can be a trap in a production. But it is unmistakable. The play exists under this blanket of blood, sex, murder, night, witchcraft, and religion.

AC: Why do you think it retains a hold on our imagination?

Maresca: Well, it ties into Macbeth's character, being both hero and villain. You feel for Macbeth, yet you want him to be vanquished. It creates such excellent complexity in both the character and the play as a whole, which is why the play continues to be intriguing to see over and over.

Roberts: Sex and power and ambition and desire. That I am Macbeth, that you are Macbeth, that we all are Macbeth. Have you ever wanted something badly enough that you would kill for it? Of course, everyone has. But not everyone is willing to take that final step to get what they want. Macbeth does, and we love him for it. It is much easier to lose ourselves in his dark desires than actually give over to our own. We all identify with him. That naked ambition, that guilty desire, is something that terrifies and thrills us, and Shakespeare's Macbeth transforms us into killers and thieves, criminals and kings.

AC: What do you think you're bringing to the play in your production that will resonate for people in that endlessly fascinating Macbeth way?

Maresca: Well, one thing we're doing is creating the play's own world, its own culture. This Scotland is not the Scotland we all know. It's something I try and do with all shows to an extent -- both Antigone and Titus had it -- but it really comes into play in this production. The audience will see a culture they've not seen before, with its own rituals and customs, but not one so different that it will confuse them or detract from the show. I think the audiences will find what they are seeing truly fascinating, on a visual level.

Although, on a far baser level, what will probably resonate with a lot of audiences is seeing a number of women having some real serious knockdown fights.

Roberts: Well, first of all, I have very little interest in watching a three-hour Macbeth, so I have cut the text extensively. Our Macbeth will run about an hour and 15 minutes without an intermission, and most of the performances will be followed by a talkback session between the actors and the audience. It is important to note that I am calling the production A Macbeth, not Macbeth, because it is very clearly an essay on the play. I make no claim that this is the definitive version; this is merely an experiment, a hypothetical Macbeth. I hope the hallmarks of the production will be an exploration of obsession, desperation, paranoia, fear, sex, power, ambition, and evil. Evil, I think, is key. As we explore in rehearsals, we are finding that evil, true evil is very simple. And when we "hold the mirror up to nature" and look at evil in a very simple manner, it is terrifying. Especially with the weird sisters -- the quieter and simpler they are, the more unnerving it is.

The play to me is a nightmare, Macbeth's nightmare. Once the witches decide in the first scene to meet with Macbeth, nothing will ever be the same again. The images of death and God, Christianity and paganism, reverberate even with today's apathetic and skeptical audiences. When Macbeth and Lady Macbeth both renounce God and their own morality and willingly embrace darkness to achieve their desires, it is thrilling. How many of us have secretly yearned to just do whatever we wanted without thought or fear of the consequences? Everyone has. The problem with Macbeth is he becomes so consumed with these consequences that he becomes paralyzed. That is where the wife comes in. Scholars have written that they are two halves of a single whole, that Macbeth is Christ, that Macbeth is the anti-Christ -- any label you can think of has at times been placed on Macbeth. But for me he is us. He is Everyman. He is every schmuck who is really good at one thing and then starts believing his own press. He is every guy who feels compelled to buy an SUV or a Mercedes for his wife. He has the trophy wife that everyone adores and admires, but his home life is a mess. Desperate for kids, he doesn't have them, desperate for the private affection his wife displays in public, desperate for understanding. Desperate for power, desperate to be recognized for his skills and abilities. Desperate. Just desperate.